A rocketship carrying four men on a recon mission to Mars malfunctions on its return journey, entering a time-warp and landing on Earth 500 years in the future.

WORLD WITHOUT END is one of those classic 1950s space movies that has no clue that it doesn’t have a clue: a rocket shaped like a missile, four explorers inside the rocket, with a few lighted switches on its dashboard to denote “technology,” no atmosphere suits to be seen, guns that never need reloading (guns? We’ll get to that), Mars represented as a red splotch on a viewscreen; instantaneous radio communication between Mars and Earth, and women from the future with the barefoot-kitchen mentality of “broads” from the 1950s. 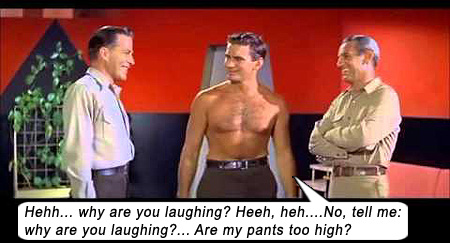 Starring Hugh Marlowe as the leader of the expedition, with young Aussie up-and-comer Rod Taylor as the sexy beast scientist, and two other freeloaders who are also given backstory to make us care (and we still don’t), all wearing their pants up around their nipples, discover an unbrave new world where cyclopean “mutates” savage the woodland surface of Earth and sophisticates with British accents in shiny polyester pajamas cower underground. (It’s H.G. Wells’s Eloi and Morlocks with their environments reversed. And much much stupider.)

The unsophisticated lack of imagination in space-faring technology and in conveying a “future” society exactly as a 1950s society (except wearing shiny pajamas and speaking like butlers), we can almost live with. But there are uncountable other elements that have nothing to do with space dialect or future societies. For example, when a big spider puppet obviously made of cloth grabs one of the explorers in its deadly cloth embrace, another explorer puts his gun point blank to the spider’s head facing the gun directly towards his pal on the other side of the spider’s head and fires three times. Of course, only the spider dies, because bullets had no exit wounds in the 1950s. Guns. They’re so safe! Or how about these “scientists,” believing themselves to be on another planet initially, tramping through mountainous woods – trees, bushes, grasses – oblivious to the fact that this organic life is exactly like Earth life, then looking through binoculars and lamenting, “Nothing but forest and brush – no sign of life anywhere!” Not counting the forest and brush, you tools! Also – not an atmosphere suit in sight. Because as LOST IN SPACE taught us, every single planet in the galaxy has breathable air.

And on it goes…. By the time the explorers come upon the underground society, we are ready to hunt down the filmmakers and bitchslap them no matter how old they might be right now. The men of the underground society are just old white Republicans sitting in rooms made of cardboard, enunciating as if on a community theater stage, all wearing “futuristic” shower caps to denote they’re, uh, futuristic. This is the future? Now we really want to slap someone – then the dumb broads appear, in mini-skirts so high we can see vagina, flaxen hair draped over low-cut cleavage, flawless milk-smooth skin, in heels higher than strippers, walking like catwalk models holding vibrating dildoes between their butt cheeks. Future society just went up ten notches. Then those broads open their mouths in that insufferable theatrical flourish and we realize that even 500 years in the future, men have yet to invent an app that would keep that trap shut. We also ponder how these voluptuous hoo-ers could ever pair off with the pajama-doofuses in shower caps. Is She Really Going Out With Him?

So it is no surprise when their female lieges declare openly and guilelessly to each of the explorers, “I love you” merely one day after their meeting. Rod Taylor with his shirt off only exacerbates that Jane Jetson pussy, and gets one of the pajama-doofs jealous enough to frame the explorers, landing them in trouble with the old pajama-leader with the shiniest shower cap. (Why do guys from the 50s and 60s with their shirts off look like they’re holding in their guts? Think: Johnny Weissmuller, Kirk Douglas, etc.)

Even if WORLD WITHOUT END is trying to make some sort of social commentary on violence begetting violence or suspicion begetting violence, or even the presence of weapons begetting violence, all is lost amongst the prosaic methods of conveying the message; the juvenile set design, the pedestrian theatrical acting, enunciating like parrots and using no contractions, everyone facing the fourth wall, the utter lack of authenticity that pervades EVERYTHING, from the explorers dressed in 1950’s pantsuits to the set dressing of the subterranean culture which looks like the 1950’s World Fair idea of “the future” to the fact that the radiation-hammered Earth surface is either the Spahn Ranch or somewhere in Texas.

It’s FIRE MAIDENS FROM OUTER SPACE revisited, with its taken-for-granted misogyny and hubris, with its arrogant stance on mankind possessing the solution to the quandaries of any other intelligent life form (which is usually shoot first, rape later). In trying to purvey itself as “smart” WORLD WITHOUT END ironically comes off as stupider than all the alien races and devolved humans it thumbs its nose at.