To Go Faster: that was the single-minded purpose of Herbert J. “Burt” Munro (1899 – 1978), whose life story was an “inspirational movie” just waiting to happen. 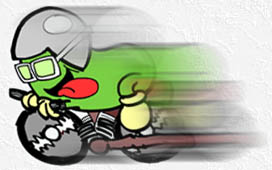 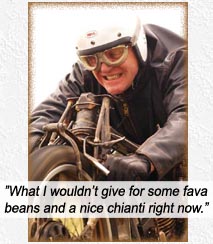 The tagline boasts, “based on one hell of a true story,” justifiably it would seem, as Munro – a fearless, free-spirited New Zealand rider who broke land speed records in his 60s – was one hell of a character.

THE WORLD’S FASTEST INDIAN is the quixotic tale of Munro’s first trek from his provincial home town of Invercargill, New Zealand, to Utah’s Bonneville Salt Flats, to tilt at the land speed record in what he hopes will become The World’s Fastest Indian – his modified 1920 Indian Scout motorcycle. Reading like the archetypal Hollywood tearjerker, it is fortunate that archives of Munro interviews and riding footage still exists, to corroborate that his tall tale was indeed a real life template for underdog movies.

As with any “true” story, director-writer Roger Donaldson (whose resumé is a laundry list of recognizable films: THE BOUNTY, NO WAY OUT, COCKTAIL, SPECIES, DANTE’S PEAK) composites events and characters to squeeze Munro’s storied life into 127 minutes of fish out of water hell on wheels. Lifting many of the anecdotes and dialog from Munro himself (from a documentary Donaldson directed in 1973, which appears on the DVD: OFFERINGS TO THE GOD OF SPEED), Donaldson admits to Munro’s legend blurring over the years, “There were many stories that I’d heard that just could not have been true and then there were stories that I knew to be true that were hard to believe.”

Anthony Hopkins, as Munro, gives a startling performance (for his utter divergence from all things Hannibal or Uptight Butler), paying supreme tribute to Munro by burying himself in a role which is part absent-minded professor, part master mechanic, all nutjob – the type of guy who, when told to mow his thigh-high lawn, torches it with gasoline, not through any malice, but with an ingenuousness that would somehow endear him to all he came in contact with.

Accompanied by the Indian he worked on for decades like a lover, Munro’s quest would see him paying his way across the Pacific as cook onboard a tramp steamer, using a log as a wheel when the desert highway claims his makeshift trailer, choking down a Native American’s gift of powdered dog’s balls for his prostate, stealing petrol from the official race supply, letting his tailpipe char his calf during a record attempt rather than stopping, battling his own ailing heart, butting heads with regulation-raunchy officials and – the most horrible trial of all – spending a night in Hollywood.

Was Munro such a yokel that, instead of finding a hotel in Long Beach (where he would pick up his bike from Customs the next day), he would rather trek all the way north into Hollywood for the night just to “see film stars”? Apparently so. With scenes that read like a clunky CROCODILE DUNDEE, Munro winds up at the Flamingo Sunset hotel, promptly getting ripped off by a fake flower-girl, propositioned by an old hooker and meeting a transvestite within the space of two minutes. (When I first moved to Hollywood, it took me a whole month to get taken by a small-time hustler, propositioned by a skanky hooker and befriend a she-male.)

Cutting down on the weight of his bike – and against all regulations – Munro saw no need even for brakes (“I’m planning on going, not stopping”) or a parachute (“I’m not planning on bailing out”). From the poverty-stricken, ascetic life he led, it was no wonder he was eternally ready to die with his boots on. If Munro had nothing else, he had balls. And plenty of ’em. Which accounts for his simple philosophy, “You live more in five minutes on a bike like this going flat out than some people live in a lifetime.” And also accounts for the trail of bodacious, wrinkled squeeze he left in his wake.

For those who believe in planetary alignments and other such nonsense, the whole solar system must have conspired to aid Burt Munro in those days leading to the 1962 Bonneville Speed Week, as fortuitous event after fortuitous event nudges him towards his goal, everyone’s heart melting over Burt’s cause (from competitors to race officials alike), creating a syrupy Disney contagion that seems non-believable at times, but which must have some basis in reality, as the shattered records are testament to this broke, obsessive, neighborhood nuisance becoming a living legend.

Some of Munro’s land speed records still stand to this day.

It’s a sobering thought that there must be thousands of fanatical old tinkerers out there who obsess over seemingly ridiculous, esoteric pastimes, any of which, with the right set of circumstances, could land them in history books.

Burt Munro just happened to be the wrong man in the right place at the fastest time.