The legend of Perseus continues in WRATH OF THE TITANS, with the kidnapping of Zeus, the treachery of Ares, the disintegration of Poseidon, and the slaying of the Titan Kronos, just like it says in all the Greek myths…. actually, not in any Greek myths; matter of fact, I’m wondering whether the filmmakers have read even one Greek myth in their wretched lives. 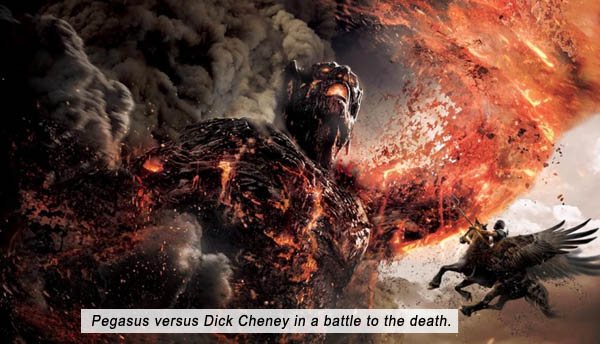 Writers David Johnson, Greg Berlanti and Dan Mazeau seem to be using the George Lucas method of storytelling – Making It Up As It Goes Along – and director Jonathan Liebesman is just encouraging them by having such a big effects budget.

It’s surely a spectacle for the eyes, but set your brain on standby for the magnificently thoughtless plotline.

Demi-god Perseus (Sam Worthington), the slayer of the Kraken in CLASH OF THE TITANS 2010, is trying to lead an average mortal’s life as a fisherman in a tiny village – until a Chimera (a two-headed, fire-breathing monster) attacks the village, seemingly for no reason other than the special effects team were bored. Perseus defeats it with no help from all the screaming extras.

Then dad Zeus (Liam Neeson) appears to Perseus  and tells him the gods need his help. In his authentic Australian Greek accent, Perseus asks, “Woy?” Something to do with Making It Up As It Goes Along. Then Zeus teleports outa there in case another fire-breathing thing comes along and he might have to lift a finger to help.

Ares the god of war (Edgar Ramirez) and Hades the god of cheese (Ralph Fiennes) team up to kidnap Poseidon the god of beards (Danny Huston) and Zeus the god of Narnia (wait – isn’t this the guy who can teleport?). They hook Zeus to a divine intravenous rock and start transferring his power to Kronos, who looks like the Catholic version of the horned devil, except he’s ten times bigger than a Balrog and 100 times as dumb. (Though he can only moan one or two words – being fused to the stone of a mountain will leave you pretty inarticulate – he has the distinction of being the one and only actual “Titan” in either of the two films.)

Now Perseus is mad, in the grand tradition of the god Rambo: “This time it’s personal!”

Perseus takes his son Helius (wasn’t Helius/Helios the Sun god who drove his chariot across the sky every morning and– oh, why bother?…) to a temple, where Poseidon uses his teleportation powers to appear and tell them all is lost. Lemme get this straight: he always had the power to teleport (as gods do), but he waited until Hades and Ares bitchbeat him half-to-death before teleporting to a temple where he happened to know Perseus was gonna be? Then he turns to dust – like it says in all the history books.

To rescue Zeus, Perseus recruits the tasty blond ringlets of Queen Andromeda (Rosamund Pike) and the arrogant dreadlocks of Poseidon’s son, Agenor, who gets the film’s funniest line when mocking Perseus: “Mighty Kraken slayer. Shouldn’t he be somewhere posing for a statue?” Followed by the film’s dumbest line, when he tells Perseus “Go to Hell!” even though there was no such thing in Ancient Greece.

They sail in search of Hephaestus (Bill Nighy, so wacked out he references his role as Davy Jones in PIRATES OF THE CARIBBEAN to Perseus, “I know you: ‘Release the Kraken’ and all that…”). As the forger of Zeus’ thunderbolt, Hades’ pitchfork and Poseidon’s trident, Hephaestus tells Perseus that combining them will create the Spear of Trium, the only weapon that can defeat Kronus. He also knows the way through the unsolvable Labyrinth to rescue Zeus. (‘Labyrinth’? Did someone say Minotaur?!) In asking for his help, Andromeda bows down before Hep (veeery sexy!) and says something so unutterably stupid that it sounds unutterably stupid even while she’s saying it, with that blind blond ambition glazing her eyes: “…but we humans have hope when there is no hope; and we believe when to believe is idiotic, but sometimes, in spite of everything, we prevail.” Yes, and the “prevailing” is not because of your “hope” or “belief” but due to the actual powers brought to bear on the problem; you prevail not because of hope or belief but in spite of it.

At the head of the labyrinth, Ares appears (teleporting, as gods do) and kills Hephaestus and all the extras, leaving our heroes stranded. But it turns out the Labyrinth isn’t that hard to get through, because they do it in what must be record time, with no jump cuts or dead ends. Oh yeah, and Perseus kills a guy in a BULL HELMET. (Unfortunately, I kid you not.)

As Perseus is rescuing Zeus, Kronos is released, raining lava down on Earth while roaring insatiably, as per Movie Monster Protocol.

Perseus must snatch Zeus’s thunderbolt off Ares’ back to create the Spear of Trium (which is getting kinda Try-ING at this point), so even though he has all Queen Blondie’s warriors at his disposal, why does he afford Ares the “honor” of going mano a mano with him? While Ares shields himself behind Perseus’s son Helius. That’s honorable, right?

Meanwhile, Kronos’s double-bodied demons tear through Blondie’s warriors like the toilet paper they have yet to invent to wipe their terrified asses. Think about it: the demons can only run rampant as long as Kronos is alive. So the *logical* move would be to overrun Ares with a horde of warriors, GET THE SPEAR and throw that bad boy at Kronos, thereby nullifying his armies. Instead, Blondie witlessly battles double-bodied demons (again, we presume, because the special effects department was justifying its budget) while Perseus has to do all the lifting on the spear job.

Perseus eventually gets Ares in a headlock, which proves to be his kryptonite: the God of War can defeat hundreds of men with his big man-club and divine pushing – but he can’t escape a good headlock.

Hades suddenly sees the error of his ways after helping Kronos escape. Now let me get this straight: this entity the size of the Chrysler building promised it would decimate the Earth when it was freed, and now it’s actually doing that. Exactly which part was Hades unclear on?

Kronos is defeated when Zeus and Hades kiss and make up and shoot gay-ass lightning bolts at him to “distract” him, while posing like air-guitar champions. Perseus then does his Luke Skywalker and lobs the Spear of Trium into a hole in Kronos’s mouth not much bigger than a womp-rat.

So the god of war is dead? Who’s responsible for all these wars then? Well, that would be Dick Cheney. And Poseidon is dead? I guess that leaves Aquaman in charge of the seas. And Zeus is dead? Who’s in charge of Everything then? Oh, that’s right, Bill Gates.

Perseus! Slayer of the Kraken! Slayer of Kronos! Not only will we never hear the end of this in songs and legends, he’s got the pick of blond ringleted chicks willing to go GREEK for him!