Well I’m frustrated, outdated,
I really wanna be over-rated.
I’m a finder and I’m a keeper;
I’m not a loser and I ain’t no weeper.
I got the boys to make a noise
Won’t ever let up – Hope it annoys you!
Join the pack, feel the crack!
Well now you’re here – There’s no way back!
— Quiet Riot, Bang Your Head.

Director Darren Aronofsky bodyslams us for a three-count with THE WRESTLER, a modern masterpiece; controlled, poignant, inspiring, funny, ultimately heart-wrenching with a Ramjet dive off the turnbuckle.

The Poff off the turnbuckle! 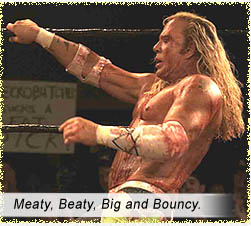 All that wayward talk about Mickey Rourke winning Mr. Oscar is well-founded. His performance as The Wrestler is music sweet music – specifically, 1980s hair metal. Not only does he pull the shameless Oscar Moments (“I’m a broken-down piece of meat… I don’t want you to hate me” – you’ve seen the trailers), he also does the most natural onscreen acting since the 1970s (think: JAWS or THE EXORCIST) – and that’s him in the ring, 100%, having spent four months drilling the discipline of the bodyslammer, performing all his wrestling stunts himself.A triple-threat performance so remarkable should be rewarded – even if it’s just the political hokum of the Academy Awards. At the time of this writing, he has already walked off with the Golden Globe for Best Actor.

THE WRESTLER opens with posters of wrestler, Randy “The Ram” Robinson (Rourke), in a montage of his glamorous, storied career, while Quiet Riot’s Bang Your Head slams at the soundtrack; some posters feature his watershed bout with “The Ayatollah” at Madison Square Garden.

Crash-cut to 20 years later in a lonely dressing room after an exhibition match, with Randy accepting a light pay packet (the usual managerial excuse “Not as many people as I thought”). He is down but not out, long dyed-blond locks, long in the tooth, long past his Use By date, yet punishing his body in small matches for small pay.

With a Steadicam following so close behind him we can hear his labored breathing and count the wrinkles on his puffy, battered face, our first intimate adventure with Randy is him being locked out of his trailer (for late rent) after returning from a match, eventually sleeping in his Dodge van.

“I really wanna be over-rated.”

Aronofsky is intent on showing us the side of this vocation farthest from the bright lights and the crowd roar, following Randy so closely we almost get a steroid high from breathing in the stank of his sweaty, bloody tights; blonding his hair, tanning his hide, doping on painkillers, buying a sweater for his estranged daughter…

He makes time at a strip club with stripper Cassidy (Marisa Tomei) who – ironically – doesn’t treat him like a slab of meat, and though they share a few tender moments, she forces herself to regard him as “just a customer.” And though we know he feels for Cassidy – not least because she spends so much time rubbing her firm naked ta-tas against his brickhouse biceps in private dances – he keeps up that tough man-facade…

Mickey Rourke has always had a body carved from unyielding rock; a background in boxing and self-abuse has brought him this wrestler’s meat-muscle frame. Though he was not Aronofsky’s first casting choice, The Wrestler IS Mickey Rourke – it is futile trying to imagine anyone else fitting this role as snugly. Rourke is not acting, just being. Though something seems very “wrong” and misshapen about that mountain gorilla frame, like it is being driven by will alone and one misstep will implode it.

Randy is obviously the oldest still on the circuit, yet the camaraderie of the wrestler brotherhood is apparent – backstage, they all give him the respect he has earned. But in this “fake yet real” “sport” he is not fighting these young man-mountains anyway – he is battling his own failing body.

Wheels go into motion for a 20th Anniversary Rematch against The Ayatollah, but after an exceptionally gruesome match (“You okay with a staple gun?”), Randy is felled by a heart attack and doctors warn him “never to exert himself again.”

“But doc, I’m a professional wrestler.”

“Join the pack, feel the crack!”

Faced with potential death if he steps into the ring again, Randy reassesses his stagnant life and bleak future. He tries to stomach the nostalgic sludge of a reminiscence tour, but seated behind conference tables, selling memorabilia and his autograph for $8 a pop, putting on fake smiles for photos with redneck fans, won’t sustain his spirit.

His day job behind a deli counter becomes intolerable (his dweeby boss denigrating him at every turn); his stilted reconciliation with his daughter (Evan Rachel Wood) goes awry; his uncertain courtship of stripper Cassidy falls flat, and Randy realizes that for all the battering he has taken in the ring, “The only place I get hurt is out there.”

“The world don’t give a shit about me.”

He is a Wrestler, only alive in the ring. Neither doctors nor time nor his body nor his heart can make him stop being one.

THE WRESTLER is a tragic commentary for those who chance into the insular world of stardom; we have made no place in our shallow, blitzkrieg society for them to graciously decompress.

Streetfighter Jack Wilson warns Philo Beddoe in ANY WHICH WAY YOU CAN: “You’re fast and you like pain. You eat it like candy. I’ve seen a few cases like that in my time. The more they get hurt, the more dangerous they become. But you gotta be durable, too. Real durable. Most ain’t.”

“Bang your head! Metal health will drive you mad!”