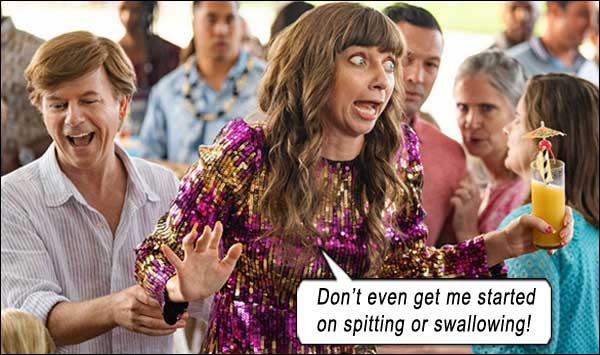 A movie filled with characters you want to kick in the head, THE WRONG MISSY is an Adam Sandler production that hits all the wishy-washy romcom clichés as it falls out of the douchebag tree.

You can smell the high level of stink in Adam Sandler productions like these, because even Adam Sandler won’t star in them, his role exclusively producer, gifting the leading man to one of his bum-chums lower on the Q totem pole (Kevin James, David Spade, Rob Schneider, et al). David Spade is the unfortunate star of this swollen eye-lump of a movie.

And that’s sad because I really enjoy Spade as a sardonic, cynical comic. His real life persona is edgy and likable, but he has never been able to capture that lighting in his film roles. It’s a job, I understand that, but he just makes himself look weak by accepting these half-baked insults to comedy; I really believe he could come off stronger and funnier, by playing to his strengths as a straight man. You’re going to say he IS playing the straight man here, but no, he’s doing a combination of both, and that’s what dilutes both. Jerry Lewis used to say Dean Martin was the unsung hero of their partnership, because it was Dean’s uncanny ability to play straight that made their act explosively funny. And by playing so straight, Dean came off as hilarious in his own right. David Spade could be another Dean Martin… if some rich buddy producer would just hand him a smart script instead of the runoff from his reject pile.

In THE WRONG MISSY, Spade is Tim Morris, an office guy who goes on a horrifying blind date with a sociopath named Melissa “Missy” (Lauren Lapkus). After that date is a grim memory, he runs into the woman of his dreams at the airport, also a Melissa (Molly Sims), who shares his tastes in seemingly everything and is a hard-9 to boot. Before they can consummate their love in a janitor’s closet, her flight is called. (There’s a valid reason why they don’t touch tips; it’s one of the wishy screenwriting rules for romcoms we’ll talk about later.) 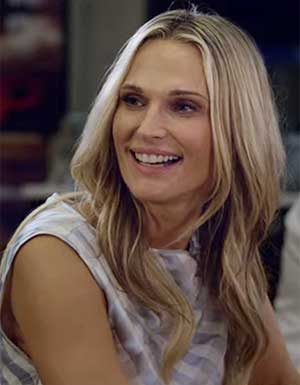 Molly Sims. Because I just want to look at her perfection. And so do you.

Tim continues a text relationship with Melissa, and invites her BY TEXT to his office retreat in Hawaii. Only when the crazy Missy appears on the plane to loudly take her seat beside him, does Tim realize he had texted the invitation to THE WRONG MISSY.

It’s frustrating as hell, not just because we were rooting for Tim to hook up with the hotness, not just because of the mayhem that ensues with Tim being embarrassed at every turn by Missy’s gregarious oafishness, but because we know that the two mismatched people will be matched by movie’s end: at first, he’s going to be repulsed by her anti-social, anti-intellectual, anti-human behavior, and eventually he’s going to realize that he needs those selfsame qualities in his humdrum life.

Did I get that right, Adam Sandler? Only you could get funding for the same old wishy.

So to comply with this insane resolution, writers Chris Pappas and Kevin Barnett insert all those signposts that point towards Tim and Wrong Missy being the couple. For instance, Tim could not should not MUST NOT penetrate Melissa in the janitor’s closet because to do so would impugn his morals with the girl he would actually end up with. When Wrong Missy suggests that she and Tim engage in a threesome with Tim’s ex-fiancé Julia (the gorgeous Sarah Chalke; she was Elliot in SCRUBS), Tim never gets the chance to actually have sex with Julia, who keeps getting inadvertently knocked off the bed as she tries to get in between Tim and Wrong Missy. Because – same reason. (It’s the same reason Adam Sandler could never get it on with Brooklyn Decker in JUST GO WITH IT, though he tried like a rutting baboon – because his character was aimed at Jennifer Aniston.) Of course, Tim and Wrong Missy are allowed to consummate in various ways (handies, blowies, fuckies), because their fate is to end up together anyway. (On a side note, when Tim and Wrong Missy do “make love” during the supposed threesome, notice the way they do it – face to face, like naked apes.)

Y’see, the filmmakers pull this sleight of hand so that when Tim ends up with Wrong Missy, no one can say, “Yeh, but he’s not that faithful and it can’t be that meaningful if he also fucked…” because he didn’t! It’s infantile, sophomoric, unoriginal and predictable, and it’s the wishy-washy convention in romantic comedies. Check carefully with your favorite romantic comedy: unless the plot is actually about cheating, the man and woman destined for each other will not fuck anyone else in their orbit even if they are given the opportunity, for the screenwriting purpose of keeping them pure for the resolution. It’s 2020 out here; in romantic comedies it’s 1925.

Director Tyler Spindel must be doing something wrong, as this is his second movie for Sandler’s Happy Madison Productions (after FATHER OF THE YEAR, David Spade’s shit movie for 2018). 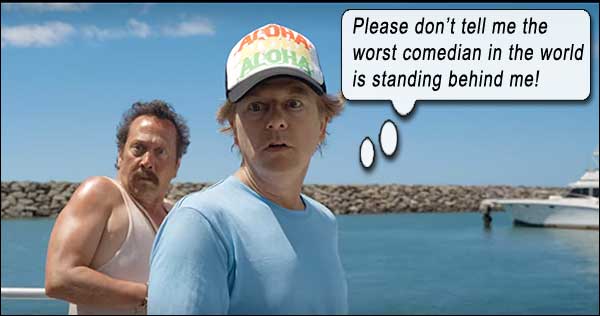 Sandler’s posse are all over this unevenly funny diversion. Wife Jackie (baring a lot of skin, looking good for the mother of his two kids); Jonathan Loughran, Sandler’s personal assistant, is Jackie’s husband (why is this unfunny guy making himself more unfunny by playing cross-eyed? Sandler keeps throwing him small roles in his films – maybe he’s a great go-fer, but he’s never been an asset onscreen); both Sandler’s bitchboys are here – the unfunny one, Rob Schneider, and the naturally funny one that is struggling with this inane script, Nick Swardson; various family members in small roles, including nephew and Jake Gyllenhaal lookalike, Jared Sandler; little stick of Asian dynamite Bobby Lee is completely wasted as a hotel clerk.

And Lauren Lapkus as Missy not only steals the show; she steals it, hocks it for a second-hand Strat, and burns the Strat like Hendrix at Monterey. Not just because she’s mad bad and dangerous to know, but because it takes balls to lean into such a hated character. Despite the annoying, clichéd script, you just can’t help but laugh at her willingness to be such a delusional dysfunctional dipshit. Ironically, I started to hate her by association as the predictable story led toward the wishy conclusion.

The one loose end that they just gloss over though is when the cool Melissa turns up in Hawaii to surprise Tim. He tells her he’s found someone else, and her reaction is dismissive to the point of apathy, “We made out in a janitor’s closet. I think I’ll be okay.” You sure about that? You just spent your time and money and energy flying to this island to be with this guy. Well, you’re not weird or anything. Or in true love. Or fighting for your soulmate. Nah. Just… buh-bye.

And the final abominable “message” when Tim says to Wrong Missy, “I wanna be free, I wanna have fun” (all good – but then) “I want to have strong opinions on things I know nothing about—“ oh, for fuck’s sake! Is this not the exact reason the United States has become a failed state banana tinpot republic, the laughingstock of every other country in the world? Yeh, fist up for strong opinions on things we know nothing about! And the final nail, “I wanna be like you.” But what IS she? She’s alcoholic, suicidal, noxious and obnoxious. She’s a classic toxic personality, ticking timebomb. Is he now going to enjoy her blackout-drinking at parties and suicidal stunts like sea-diving off cliffs? Is he going to start relishing getting handies on planes and her bringing home guys for threesomes?

And the irony is that Tim is telling Missy he wants to be all hers while she’s in a bar, back on the Tinder dating scene, trying to pick up Vanilla Ice.