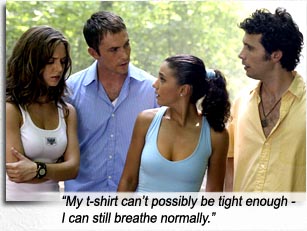 As I walked onstage at The Whiskey one night and the previous band’s singer was walking off, I jokingly said to him, “You look exactly like Jeremy Sisto!” His laughing reply, “I am!” He is as nice a guy as his roles portray him, so I stopped channel-surfing at WRONG TURN one night just to watch Sisto’s smiley contribution.

TEXAS CHAINSAW MASSACRE meets DELIVERANCE when a clutch of sexy teens stranded in West Virginian backwoods stumble on inbred cannibals who systematically hunt them down and knife-kill them for supper.

An axe-notch above the usual screaming-teen fare through its fine performances (from occasional A-Listers Eliza Dushku, Desmond Harrington, Emmanuelle Chiriqui and my pal the rocker Jeremy Sisto) and fearfully realized cannibals (which the director, relatively-inexperienced Rob Schmidt, had the good sense to keep almost mute and mostly unseen), WRONG TURN ratchets the suspense to unusually high levels for a film of its jaded ilk.

But poor Sisto gets arrowed in the back. Maybe that’s why I haven’t seen him round The Whiskey lately…