The all-powerful First Mutant called Apocalypse wakes from a 5,000-year hibernation, ready to spread democracy American style – which means doing everything HIS way. He enhances all mutants’ powers, he razes Auschwitz, he destroys all the world’s nuclear weapons, and he intends to wipe out homo sapiens.

I don’t see a problem with any of this.

And that’s the underlying dilemma in X-MEN: APOCALYPSE – the villain actually makes a whole lotta sense! We find we are only rooting for the X-Men – the prescribed heroes – through laziness, without examining why they inhabit the supposed moral high ground, because that would involve thinking and would draw attention away from Jennifer Lawrence’s blue cameltoe.

Apocalypse (Oscar Isaac, blue-hued to express the trendy go-to color that denotes super powers) gathers “Four Horsemen” to fulfill scripture (Storm, Psylocke, Archangel and Magneto), and then proceeds to do everything a Darwinian evolutionist would – he makes the world a better place by ridding it of organisms who are not equipped to live in it. “This world needs to be cleansed.” I agree. I’m just trying to figure which character from THE GODFATHER he’s doing – Marlon Brando or Luca Brasi? 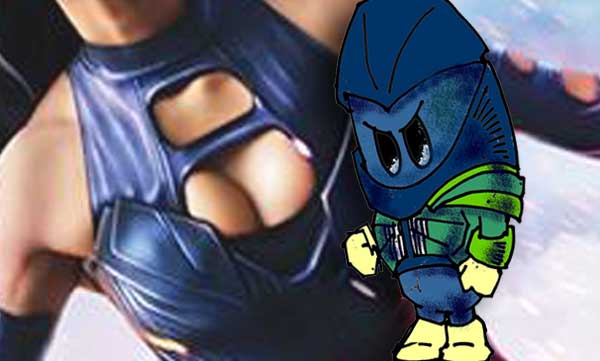 Apoffolypse. Join him. For the tits.

APOCALYPSE follows the events of DAYS OF FUTURE PAST, so we are back in the early 80s with the disco X-Men: James McAvoy as Professor Charles Xavier, Nicholas Hoult as Hank McCoy/Beast, Lucas Till as Havok, who brings his brother Scott Summers into the fold (young Cyclops, expressed in virgin vermilion by Tye Sheridan), with other young mutants revealed as we go: Jean Grey (Sophie Turner), and Nightcrawler (Kodi Smit-McPhee).

After a prelude that takes us to the Nile Delta in 3,600 BC, with scenes of a mystic magic man (En Sabah Nur aka Apocalypse) being buried under a collapsing pyramid, we are spirited forward to Ohio 1983, where Mystique (Jennifer Lawrence) is gathering young mutants for Xavier’s School for Gifted Cameltoes.

Meanwhile in Poland, there’s a different film going on, as an incognito Magneto (aka Erik Lehnsherr, played by the magnificent Michael Fassbender) has settled into rustic family life as Henrik, with a wife and young daughter, and a laborer’s job at a metal foundry (quaint!). The movie will never quite match the somber tone achieved in these Lehnsherr sequences. It is the same with all the Fassbender X-MEN movies. He and his character are miles above the rest of the cast and the material. Movie tries hard to recreate some of that darkness when Apocalypse discovers young Ororo/Storm (Alexandra Shipp) in Egypt as a thieving orphan, or rescues young Angel (Ben Hardy) from a wrestling cage and steels his wings into Archangel, but the cruel tragedy visited upon Lehnsherr cannot be matched.

One of the movie’s best scenes is Lehnsherr about to wreak vengeance on his foundry coworkers for betraying him: “My name isn’t Henrik. My name is Magneto!” and Apocalypse appearing behind him, whom he warns, “Do not try to stop me from killing these men…” Apocalypse counters, “I’m not here for them, I’m here for you.” And suddenly all the men under Magneto’s steely gaze are killed with one gesture by Apocalypse. Lehnsherr turns slowly, startled, and we are more than a little amused that such a ferocious act can be a punchline. And Apocalypse wins Magneto’s bromance… 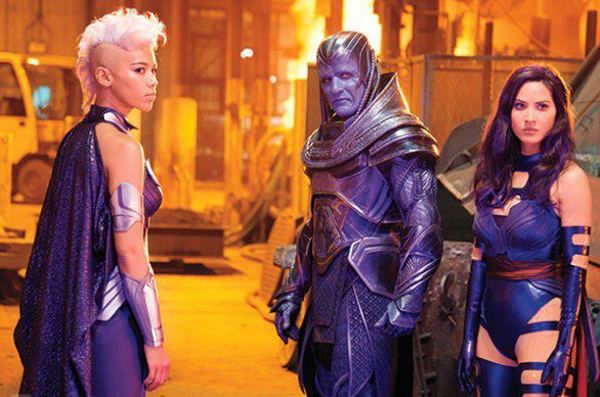 “Okay, me an’ my bitches are taking off. You want anything from the store?”

Scenes like these make us wish these superhero movies would tone down the quantity of supers per film and focus on the quality of their interaction with normal society, and its consequences.

The X-acolytes gradually coalesce, with numerous nods and winks to fanboys, under the tutelage of Xavier and Mystique, with Beast and Havok adopting mature “veteran” roles. There is the subplot romance between Moira McTaggart (Rose Byrne, sexier with every movie) and Xavier; there is comic relief Quicksilver (Evan Peters) saving the whole Xavier school from an explosion, which outdoes his show-stealing scene from the last movie; and there is the magnificent acting of James McAvoy as Xavier. (When he cries upon locating Magneto with his brain-enhancing computer Cerebro, I also leaked a little – for the excellent acting, not the bromance.) Like Fassbender, McAvoy also threatens to elevate the movie into another realm of sobriety. Then someone like Jubilee walks past and we sigh and stare at Jennifer’s cameltoe.

But there is something missing. Something big, bold and berserker: 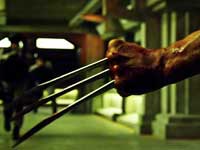 See how your heart beat faster and your throat got wetter? Maybe it is not realized by the majority of comic-con cos-players, but every X-MEN movie has revolved around Wolverine; he is the audience’s voice, he boasts the most full-throated character arc, and he is the hands-down sexiest meat on the hoof to grace the X-MEN cinematic universe. DAYS OF FUTURE PAST was even rewritten from its original graphic novel to accommodate Wolverine as the lead instead of Kitty Pryde. And in FIRST CLASS, the filmmakers somehow squeaked by due to the charisma and talent of Fassbender and McAvoy, with Our Man Logan used as cameo – a cameo, nonetheless, where he blasted the best line of the movie. It doesn’t even matter that the carnal-muscled Hugh Jackman as Wolverine towers a full foot above the Canadian Special Ops recluse of the comics. No one cares, not even fanboys. We just love us some Wolverine!

APOCALYPSE is a valiant attempt at creating backstory and characterization for a whole slew of X-newbies, but remove Wolverine from the pivotal role and this whole shebang seems kinda hollow. And we realize how much we miss him when he appears in a blamtastic cameo:

Shirtless, claws snikting blood fury. Doing what he does best. And what he does best isn’t very nice. We are home… Such is the drawing power of Wolverine that his claws are used in the stinger to the trailer: Young Cyclops says, “We had… a little help”– Crash-cut to a closeup of dem claws snikting out, then crash to black. They use this tease to drive us into the cinema, knowing it is a deceit.

But Wolverine has left the building! After he nude-kills and berserker-screams, he dashes off into the snow. And we feel our spirit animals running off with him… 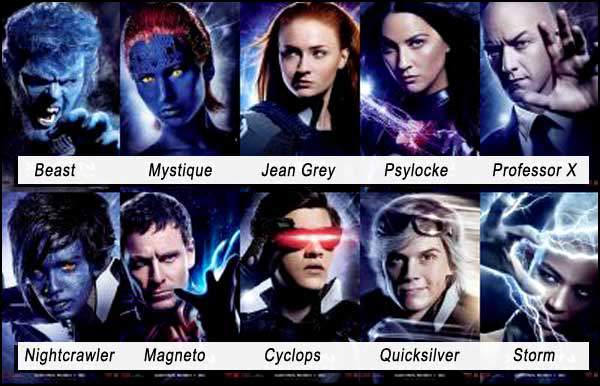 The X-men beat on each other with no real quarter lost; Storm, Psylocke (Olivia Munn), Archangel and Magneto against all the newbies, including Nightcrawler, Cyclops, Mystique, Jean Grey and Quicksilver. (When Psylocke slices that hurled car in twain, where are YOU looking? Let’s just say, Jennifer Lawrence doesn’t have the monopoly on blue cameltoe any more.) All of them possess powers which are negated or diluted by the powers of someone else; all, that is, except Magneto and Quicksilver. (Any wonder Quicksilver is Magneto’s boy? A subplot they try to insert like a Luke-Darth tragedy, which misfires.)

Let’s face it: no one can defeat Magneto; he’s got the world in his hands – literally. Apocalypse enhances Magneto’s powers to the point where he can manipulate the metal core of Earth itself. And Quicksilver – able to move faster than light (the ability to save everyone during that explosion verifies that claim) – can utilize his powers in myriad ways.

And then there is Apocalypse – but I prefer his Egyptian epithet, En Sabah Nur (righteous!). We wonder how the writers could convince us of anyone more powerful than Fassbender’s Magneto, yet Isaac imbues the role with an authentic omniscience, with soft-spoken contempt and indifference. How do you defeat someone who has the ability to GIVE YOU MORE OF YOUR OWN POWER? Xavier discovers this the hard way when Apocalypse gives Xavier the biggest brain in the world and he still can’t defeat Apocalypse! So the whole affair is skewed from the get-go. How can the “good” guys possibly win?

It’s a little tiresome that every superhero movie this season is about supers beating on each other. From CIVIL WAR to BATMAN V SUPERMAN, to APOCALYPSE, why can’t we all just get along?!

They call Apocalypse’s quest an “extinction-level” plan. Is it? No. His political platform very clearly states he wants all mutants to survive! That’s not extinction for these mutants fighting him. That’s only extinction for Homo sapiens, the species these Homo superiors keep fighting to protect, with only contempt and fear from the humans as thanks. The sapiens are the less-adapted, like the thick-skulled, low-browed Neanderthals once were. Who fought for the Neanderthals to continue when evolution selected them for extinction? One only has to look in the mirror at our high, smooth brows to see who won that fight.

Director Bryan Singer and writer Simon Kinberg have created a story where they have not realized how cool and ethical and judicious their “villain” is! Even the slogan “Only the strong will survive” is Darwinian. And “strong” in Darwinian terms means the “best adapted to the environment”; flensing the weak from the herd.

They discover that through the ages Apocalypse has been transferring his consciousness into younger beings, so he can continue his work, “Wherever he ruled it would end in disaster, cataclysm, some kind of… apocalypse.” (Using the word incorrectly again: “apocalypse” means revelation, not annihilation.) We presume his latest incarnation was one George W. Bush… 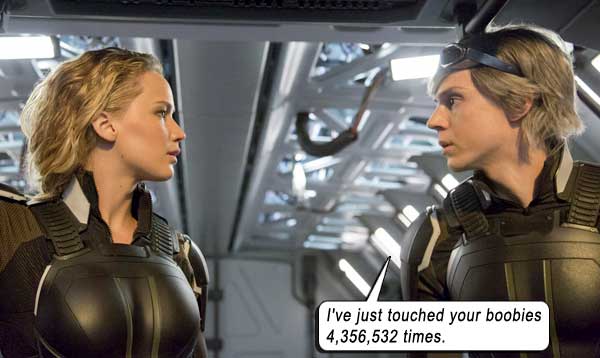 As with all the X-MEN series, the writers/creators have not the slightest clue on how mutation works. Mutation does not happen in its strongest form in the very first mutation. En Sabah Nur – being the First Mutant – would be the “missing link” between sapiens and superior; his mutation would be the weakest. (N.B. You don’t just grow eyes instantaneously. They start as light-sensing cells. Each further mutation, if beneficial to the organism’s survival – is passed on, and gradually you arrive at the meticulous design of eyes.)

The homo superiors have their powers exemplified by Apocalypse for better survival. That’s artificial selection. It’s what evolution does unwittingly – called natural selection. Artificial selection is mankind’s claim to godhood: you breed plants that can survive all weather, breed animals that are better guard dogs, better racehorses, better eating for the dinner table. Even Homo sapiens benefit from artificial selection – fake hearts, fake limbs, medicines and machinery, computers in your phones, digital chips in your brains…

I’m with Apocalypse from the start. Take mankind further, even if I’m not chosen – You go, girl!

As with all superhero movies, they “cheat” to defeat the undefeatable, by ganging up on Apoca, led by Magneto (of course), to shoot rays at him together like a family — cough-bullshit! Then Jean Grey unleashes her Phoenix force, which is apparently some unbridled destructive energy from another dimension channeled through Jean’s taut bosom. I dunno, just sounds like a woman screeching to me, and who can tolerate that shenanigan for more than a hot second?

Hugh Jackman has expressed he is tired of playing our favorite X-Man; it’s just too strenuous to stay in that dynamite shape for so long – he’s been Wolverine nearly two decades! Scheduled for just one more WOLVERINE solo film, it will be a sad day when we wipe down our workout equipment and accept another berserker in the musculanimous role. Oh, Wolvie, you will be missed! And this film has already suffered for it. You’re going to deprive us of the impetus behind the X-MEN franchise simply because you want to eat a donut?…