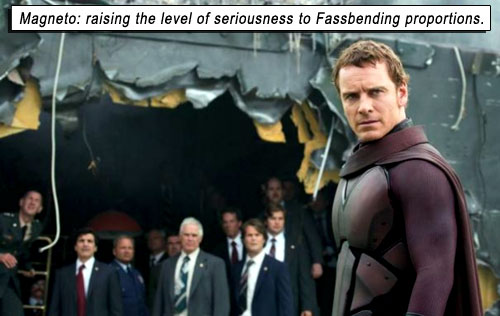 Wolverine goes back in time to unify the X-Men of the disco past to stop an event that brings into existence giant robots called Sentinels, who are systematically wiping out X-Men of the dystopian present. It’s a heart-gripping, tension-filled, magnificent, sprawling epic – that doesn’t make one lick of sense! 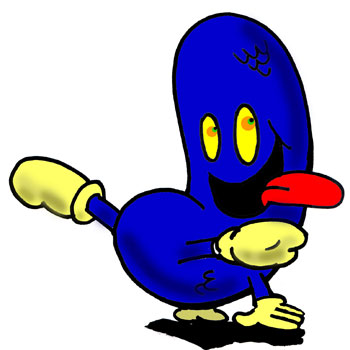 X-MEN: DAYS OF FUTURE PAST is the highly anticipated filmic version of a classic 2-issue X-Men comic thread, involving time travel, the extermination of Humanity and the extinction of X-manity. But I don’t see why there was such anticipation, because the Days Of Future Past story, from The Uncanny X-Men issues 141-142, is not well constructed, and reads like a 1960s BATMAN TV episode, with garish costumes, lots of punching, embarrassing dialogue and big dumb villains (the Sentinels and the Brotherhood of Mutants, led by Mystique). The Sentinels in the comic are made of metal, so they could have easily been destroyed by an old gay man (i.e. Magneto); the Brotherhood are straight from Adam West’s wildest, melodramatic, talky-villain dreams.

The DAYS OF FUTURE PAST movie on the other hand (written by Jane Goldman, Simon Kinberg, Matthew Vaughn, and directed by the man who brought the X-MEN movies to life, Bryan Singer), has taken every squandered idea from the comic and fleshed it into a layered, thrilling epic that exists in a world we are familiar with (rather than one populated with so many characters wearing SCREAMING YELLOW). Note that the writers of the comic (Chris Claremont and John Byrne) are not credited. Nor should they be; although worthy writers, their dated ideas feel like being kissed by your parents in front of your school friends. Plot holes are closed off, action is deadly serious; what might have been a bucking cosplay tyrannosaur is reined in with hefty dialogue scenes, touching interrelationships and Wolverine’s butt in place of Kitty Pryde (who is bland in the comics and the movies). Most importantly, instead of garish costumes, everyone’s wearing a disco inferno. 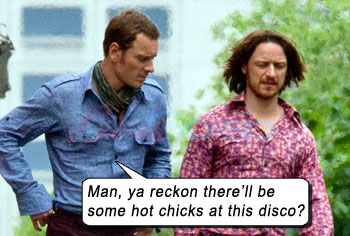 The movie sentinels don’t fall into that trap of being easily defeatable; they are now made of a polymer substance, augmented with mutant DNA, enabling them to take on each X-Man’s powers and use it against them. It’s a completely specious rationalization, but again, in this universe, at least it explains why even the most powerful mutants cannot defeat them.

The cast from both X-MEN and X-MEN: FIRST CLASS are all here: James McAvoy as young Professor Xavier (who spends his first few scenes as Eric Stoltz in PULP FICTION); Michael Fassbender as young Magneto. That guy takes it sooo seriously. I said it before, and I’ll say it again, not as joke or pun, but fact as cold as steel: Fassbender is magnetic! Even Ian McKellen, having done three movies as the character, never owned Erik Lensherr as maliciously-deliciously as Fassbender. Whenever he’s onscreen, it’s like watching a somber Nietzschean treatise on moral ambiguity. With Ian McKellen, it’s like watching Dr. Smith from LOST IN SPACE. And the myriad, creative ways Fassbender utilizes the Master of Metal’s awe-inspiring powers! When I grow up, I wanna be Magneto!

Nicholas Hoult in a large role as blue-furred Hank/Beast; Shawn Ashmore is Iceman with a beard; Daniel Cudmore is the cool steel Colossus; Lucas Till makes a cameo as energyboy Havok; and Jennifer Lawrence and her chubby cheeks return in the lead female role as naked blue Mystique.

The plot revolves around Wolverine convincing the disco X-Men to stop Mystique killing the man who invents the Sentinels, the bane of X-Men. So you can see the conundrum: Mystique is doing what any X-Man in their right mind would do. But now this wolfie guy is telling us counter intuitively that the killing of the inventor of the Sentinels will fast-track their creation, rather than stop it. Oh, and he sez he’s from The Future, so everything he sez is true…

Awesome Little-Person-with-Big-Voice, Peter Dinklage, is Bolivar Trask, who creates the Sentinels to combat the “mutant threat.” He tells congress “homo neanderthalis was completely wiped out when homo sapiens arrived on the scene. So too would be the fate of homo sapiens now that homo superior had arrived.” Meanwhile, Wolverine is still walking around as a homo erectus. 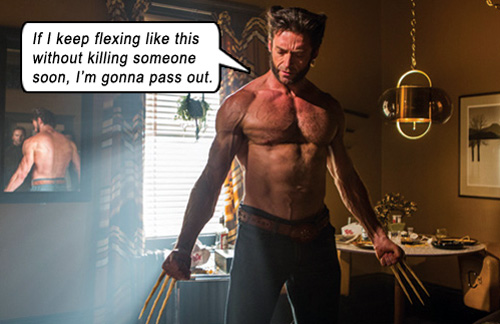 Speaking of erectus, can they make Mystique and her pussy-jitsu any more of a walking orgasm for the sake of 13-year-old boys? Not only is she 23-year-old Jennifer Lawrence, distinctly attainable to 13-year-olds were they to become rich entrepreneurs in the next 10 years, her martial arts technique involves mostly open thighs, jiggling titty and a zealot’s commitment to camel toe. 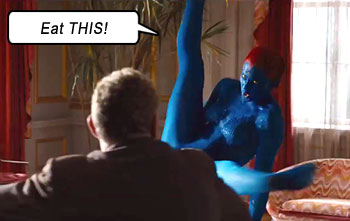 And there are some peachy new mutants to splice our DNA: Warpath (Booboo Stewart, whom we presume gets so mad over people calling him names that he “goes on the…”?), Bishop (doing the channeling-energy thing that The Bacon did in the last movie), Blink (with a cool teleporting power), Sunspot (who is basically the Human Torch redux – who’re you “superhero creators” trying to fool?), and the absolute coolest cat of all – Quicksilver (Evan Peters, who is basically The Flash, but played like a champion ADHD, with a madcap rescue scene that will guarantee he gets his own spinoff movie).

Wolverine (for the seventh time, ladies and gentlemen, Hugh Jackman, who looks like…well, a superhero) is sent back in time through the scientific process of Kitty Pryde (Ellen Page) putting her hands on his temples and Professor X (Patrick Stewart) and Magneto (Ian McKellen) watching and licking their lips like two dirty old men. When he arrives back in time, his muscles are already pumped, his adamantium is gone (a few good sight gags of these realizations), Nixon is the president, his nemesis Stryker is but a military lad, and his bellbottoms are pimpin’. The focus soon skews to the incredible powers of Quicksilver (being totally speedy), Mystique (being totally naked) and Magneto (being totally Fassbender). And like all time travel movies, it is artfully written that what they were trying to stop happening, happens anyway through another unforeseen pathway.

Of course, the overarching mistakes of this movie are the time travel anomalies (if we take the Laws Of Time Travel as being those laid down in BACK TO THE FUTURE all those centuries ago). But then, this movie – like any blockbuster – was not written to comply with Time Travel rules, but written to comply with Hollywood Screenplay Rules – and when held up to those rules, it’s absolutely brilliant! Heroes, villains, romantic repression, sexy bodies, world at stake, ticking clocks, character arcs, foreshadowing and payoffs… you couldn’t ask for a better example of modern screenplay construction.

Superhero movies, though they have become their own art form, are still not perceived as containing the inherent gravitas of non-superhero dramas, so we forget what great actors populate them. Jesus! Look at the talent: Shakespeare vets Stewart and McKellen, the great McAvoy and the magnificent Fassbender, the man-nificent Jackman, the small-man-nificent Dinklage, the women-ificent Jennifer Lawrence and Halle Berry (and all of the principals have won Best Actor awards in some form or other, Oscar, BAFTA, AFI, Globes, etc.).

The story just doesn’t make any sense, is all… 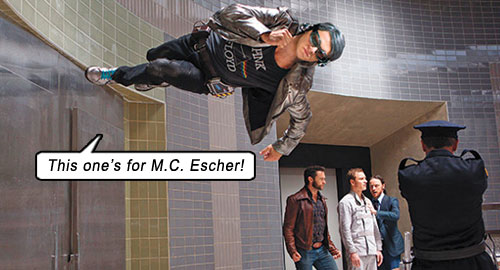 You see, it didn’t matter in the present whether everyone died or not – in fact, most of them die – but the movie treats the Present like a parallel timeline with the Past, but it’s not – it’s successive: the Present happens after the Past has been acted out, or after the past has been reshuffled. So why are the Present Kitty, Professor X, Magneto, and a host of new Wikipedia entries, depicted as making some kind of last stand as if Wolverine’s mission had to end for their Present to be saved? Let’s face it, as soon as Wolvie was sent back, their Present should have changed.

I mean, all that Wolverine had to do was stop Biff giving the Almanac to himself in 1955, right?

You mean the Present was not changed one jot after disco Magneto cut loose a football stadium, flew it through the air and dumped it on the White House lawn? At least 1,000,000 lives would have been skewed with that single event – not just ticket holders contacting the booking company to get their money back, but the players’ lives, the insurance companies of the game, insurance companies of the site, White House contractors hired to remove the rubble; traffic detours; water and power re-routed; a family goes without food, a baby dies that would have won Gold Medals; a woman doesn’t make it to the hospital on time to birth a baby that discovers the cure for AIDS, etc. The ramifications and concatenations would be literally endless. That’s just one event – the stadium gag – but these disco X-Men rove around smashing, flying, breaking, bashing, shooting, unmindful of the millions of time pathways they are deviating due to Wolverine affecting everything and everyone who orbits in his vicinity with his intrusive presence and whip-tanned butt.

And not even a sliver of the Present changed until that one last decision by Chubby Cheeks on whether to be or not to be?

Where’s Doc Emmett Brown when we need him?

Lost In X-Continuity.
He lost his adamantium in THE WOLVERINE, and at the end of that movie, Magneto and Prof-X came seeking Wolverine’s help. We presume this is the predicament they sought his help for. But in this movie:

1) Wolvie has his adamantium again in the Present, which seems like a distant dystopian future, not a time period just after that airport meeting. Did he go through that adamantium process again?

2) the Sentinels seem to have been around for years killing X-Men and civilians, whereas the end of THE WOLVERINE seemed like a normal pre-apocalyptic time still.

3) Only in the time-frame within this movie do they decide to send Wolvie back instead of their first choice, Professor X. Why then, did Prof-X and Maggie seek his help specifically in THE WOLVERINE?

Widely regarded as the best scene in the movie.
It is.