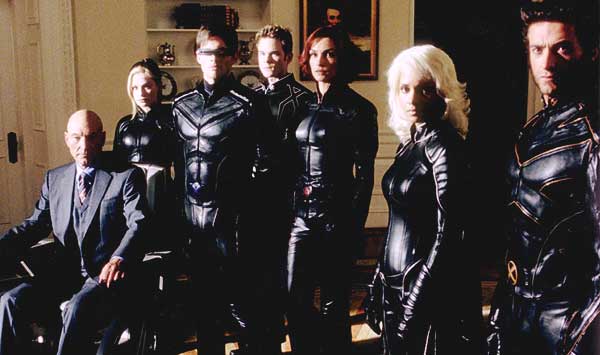 At Madame Svetlana’s House Of Clamps, let our experienced staff cater
to your every bondage and discipline need.

They gave superheroes a new reason to be super.

X-MEN is the sometimes brooding, sometimes kick-ass, mostly campy filmic incarnation of a Marvel Comics series that added a new dimension to “super” heroes. It doesn’t quite outline the first generation of Professor Xavier’s “X-Men” but it comes close enough to raise the hairs on our bushy berserker sideburns.

In Bryan Singer‘s X-MEN, the internecine struggle between mutants of two differing ideologies reaches a zenith when Magneto (who hates humans) tries to turn the populace of New York into mutants via a big special effects machine, and the X-Men (who protect and pity humans) are there to stop him in their tight black leather.

Unlike regular superheroes who were from off-planet (Krypton, Thanagar, Asgard) or whose powers came from outside forces (an intergalactic lantern, a radioactive spider, gamma rays), or who were just righteous bros in fancy panties (Batman, The Punisher, Iron Man), the Uncanny X-Men’s powers came from WITHIN; “cursed” with mutant genes, they each exhibited various powers that placed them beyond the pale of homo sapiens. Creators Stan Lee and Jack Kirby (1963) had hit upon an umbrella reason behind “super powers” that could be applied to any powers at all – no more need for contrived “origin tales”! He can grow more arms if they’re lopped off — uh, how? He’s a MUTANT – that is all ye know and all ye need to know. And this rationalization became so popular that it embedded itself in comicdom’s consciousness. It needs no explanation in mainstream media. My bushy sideburns leap for joy.

Within this new rubric, an irony – being mutants, these heroes were reviled by “normal” humans, even as they protected those humans from threats, the main threats coming from other mutants. An undercurrent of bigotry infuses every X-Men episode, inadvertently mirroring societal ignorance.

And director/co-writer Bryan Singer has reverently brought all these facets to life in X-MEN. It helps to have an almost perfect cast.

Sir Patrick Stewart, eternal Shakespearean, born leader, calm as stones, is telepathic Professor Xavier (aka Professor X); his brains are his brawn; from his school for mutants, some rise to become X-Men, defenders of justice, humanity, and low gas prices for the JP-7 fuel in their guzzling X-Jet. From his snazzy wheelchair, he Makes It So.

James Marsden, Teen Model mannequin, is laser-eyed Cyclops; in the comics, the tactician leader of the X-team, here, a vanilla love interest for Jean, and occasional eye-juice ejaculator. Oh, he does get to give some orders, but only after Wolverine says it’s okay.

Shawn Ashmore is Bobby Drake (aka Iceman, here an Ice BOY), trying to woo his chick Rogue without actually touching her. As if mutated virgins don’t have it hard enough…

Young Anna Paquin is baby-faced Rogue (what the–?! I know, I know, fanboys: Rogue doesn’t officially enter X-Man canon until 20 years after their inception, but here she is the brunt of the plot). Her mutant power sucks… the life force out of others. She cannot touch anyone without incapacitating them as their powers flow into her. Which gives the term “unsafe sex” actual meaning for the first time in its revenue-coined history. Rogue is immediately drawn to Wolverine’s musk, and uses her life-leaching-touch thingy as an excuse not to tongue Bobby Drake.

“Not so fast, Bub. You didn’t read the “claws” about pissing me off!”

And then there is Wolverine. Australian beefcake Hugh Jackman is the mysterious Logan (sporting “Wolverine” dog tags) with adamantium skeleton and triple-claw swagger. The X-MEN movie is about Wolverine. Really. No matter the movie title and the fact that this jampacked movie brings so many comicbook heroes to life, a conscious dramatic decision was made to make this feral scrapper with the shrouded Special Forces history the focus of this X-MEN movie.

Consider: Wolverine/Logan is given all the nuances of character that only lead roles boast, while all the other heroes are merely shallow tropes. It is his throughline that is resolved (trying to discover his past); it is his power struggle with the purported “leader” Cyclops (for primacy and the girl); it is his heroic action that saves the day; he is the only character with a redemption arc. It is Wolverine whose eyes we are seeing through as he wakes in a strange environment (the X mansion), it is he who speaks for the skeptic in all of us when Xavier introduces the X-Men with their code names “Storm” and “Cyclops” (Logan: “What do they call you? Wheels”?); he and Magneto are the only characters with “introduction scenes”; and let’s face it – though surrounded by models, he’s the best lookin’ mutant for miles.

We meet Wolverine doin’ what he does best: scrappin.’ We don’t so much meet him as drink him in: shirtless, boozing, chomping a cigar as he takes down a contender in a filthy pub cage match. And the most amazing part: his hair! How did they smoosh it into that pointy-v we know and love from his brutal graphic novel adventures? When he snikt’s his adamantium claws out, it is in the best gunslinger tradition, holding off two men on either side of him. Then he saunters out of the bar with his v-shaped mullet all sassy. Except for his over-6-foot frame, Hugh Jackman is EXACTLY how we envision Wolverine. Not since Christopher Reeve as SUPERMAN has there been casting so awe-inspiring, so pitch perfect, so like-a-glove. An adamantium-clawed glove.

Film actually goes against canon in making Logan so touching. When Rogue is trying to run away, he consoles her: “Give these geeks one more shot. The Professor understands people like us.” Which only makes her untouchables ache for him even more.

There is no Angel and no Beast (two of the original X-Men), but there is — Magneto.

Sir Ian McKellen, also Shakespearean giant, also Japanese garden calm, is iron monger Magneto/Erik Lensherr. Now we know the comicbook Magneto is a muscly maroon mantoy, but even the visual miscasting of doddering Sir Ian cannot impede him taking the metal-bending role to the delicious limits of Dr. Zachary Smith and making it his very own, at one point tut-tutting Wolverine, lamenting, “Oh, dear boy…”

Loquacious, regal, crafty, the only mutant to use his abilities to their fullest tactical extent, Magneto is the morally ambiguous “bad guy” who mistrusts humans, especially Senator Kelly (Bruce Davison) who wages congressional war on mutants. Magneto’s plan is not so much evil as vengeful: to mutate every human in New York to make them realize there is nothing to fear from mutation. Through him, we feel the analogies to Nazi Germany and modern-day Amerikan Republicans: “Women and children, whole families destroyed simply because they were born different from those in power.”

Magneto may be old, but he’s an Old Dog; what can we make of his right-hand man being a right-hand svelte blue nude chick? Rebecca Romijn-Stamos, wet dream, working blue, is shapeshifter Mystique. What better use for your right hand?

The opening scenes of X-MEN are powerful, almost sinister, deadly serious and set a tone for the movie that the movie itself cannot match. A YouTube comment says it all: “If the whole movie was like this, the movie would have been epic.”

In these opening scenes, we see a young Erik Lensherr in a concentration camp discovering his latent powers over metal. And we meet shirtless Wolverine like Eastwood with claws. Then it gets progressively campy. Magneto turns Senator Kelly into a water puddle (an aqua-man, if you will – or if DC Comics will let us); the X-Men mill aimlessly through Act Two, where we discover most of them can’t act too. There is a magnificent display of Dr. Smith’s telekinetic powers over police cars and bullets, and the final ill-contrived climactic scenes illustrate how limited the writers’ imaginations are, as all these beings with various super powers stand around and get their butts kicked.

The final “showdown” is laughable, as the X-Men debate how to get fifty feet up the Statue of Liberty’s arm to rescue Rogue: “Storm, can you fly me up there?” “I don’t have that kind of control!” “Don’t take the shot – you might hit her!” “Jean, can you steady him?!” “Nobody expects the Spanish Inquisition!” Eventually Cyclops takes charge and gives orders on how to do it. And Wolverine agrees, so they do. 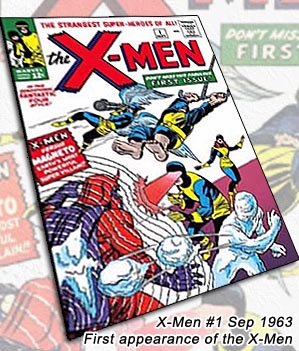 Famke Janssen:
An Open Letter, from Poffy The Cucumber