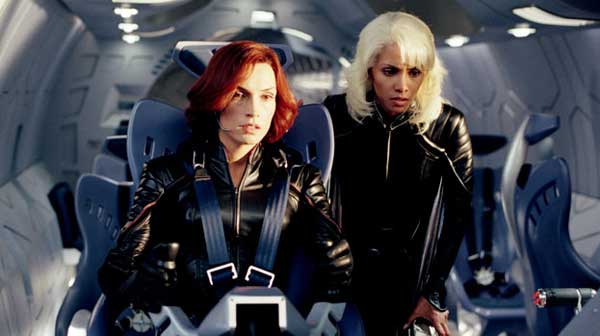 In X2: X-MEN UNITED, the two factions of warring mutants we met in X-MEN (2000) unite against a common enemy: homo sapiens. And all genetic babbling breaks loose…

(Unfortunate that X1 and X2 are now associated with these mutant movies, instead of their original references: Bell’s X1 aircraft, piloted by Chuck Yeager, the first documented to break the sound barrier in 1947. Never forget that, young-uns! Successive X-numbers denoted successive prototypes.)

Brian Cox is William Stryker, a military madman who gets the president’s okay to wipe out mutants in society. There is a subplot regarding his role in “creating” Wolverine, which is never resolved – unless you count Wolverine neck-chaining him to a helicopter while a tsunami bears down on him “resolved.”

Though much of the casting fits our preconceptions absolutely, we weep at what they’ve done to Cyclops (James Marsden), whose role is disconcertingly minimal, as it was in X-MEN. Comicbook Cyclops/Scott Summers was always the undisputed Leader of the group, exuding a patriarchal air amongst the very first x-youngsters to the present. Movie Cyclops exudes all the presence of a day-player, or some guy in a bar in Miami in an episode of GIRLS GONE WILD.

Jean Grey (Famke Janssen) is also abused somewhat. Firstly – that hair – not working, honey! Gone are comicbook Jean’s cascading, volcanic-red, lava-locks (too 80s for this modern film? – but no worse than the Animé cartoon hairstyle she now sports); will it have to come down to an episode of VH1’s 50 AWESOMELY BADDER HAIRDOS to acknowledge this soccer mom abomination? And before we know it, Jean is gone. In a dramatic high-point, sexily holding back a wall of water while simultaneously powering up the X-Jet, she is sacrificed; a device which had to occur for Jean’s overwhelming Phoenix force to achieve illimitable psionic freedom. (Somebody stop me sliding into geekery!…) In essence, in just two movies her character traverses an arc which took decades of comics to develop.

Movies unfortunately do not have the luxury of comicbook shelf-life; plots that were developed over thousands of inter-connected comics must necessarily be composited into a few films, before the franchise goes to pot with new directors, unfamiliar and unlikeable cast and widened demographic mundanity. i.e. it always ends up G-rated, with scenes of soldiers crawling out of exploded military vehicles to prove that they are still alive.

The film unflinchingly supplies each major character with an interesting arc; an almost insurmountable undertaking, considering the plethora of varied roles and interlocking story lines. Director/co-writer Bryan Singer and writers (Zak Penn, David Hayter, Michael Dougherty, Dan Harris) have done an incredible job, full tilt boogie – even day-player Cyclops gets his moment to kick butt and take names – but is ultimately taken down by a chick – girly-man style! And unfortunately, we only get one brief moment to see Colossus go full steel.

Before I go on, I must clarify: this is an excellent movie, well-filmed, well-written, well-acted – and hey! Wolverine! (Hugh Jackman) – ’nuff said! But it is not without its illogicities.

An example: Rogue (Anna Paquin) is sucked out of the disabled X-Jet and Nightcrawler bamfs out and retrieves her, bringing her back onboard safely – excellently illustrating his power’s utility – BUT – well, he’s back in the out-of-control X-Jet! Why not bamf to the ground instead, Isaac Newton? Matter of fact, why not individually bamf everyone down to the ground? This is the quandary that writers of superhero films must face: all these beings put together make up a formidable force and if they logically reasoned through any predicament, nothing could ultimately harm them.

When Wolverine barks, “Don’t we have any weapons in this heap?”, the full portent of his question hits us when Storm’s (Halle Berry) eyes go white, readying to bring the thunder – they’re ALL Lethal Weapons. Yet here is another mis-use of power from that same scene: Couldn’t Storm (who has just conjured more twisters than there were in the movie TWISTER) conjure a mighty updraft to float the X-Jet safely to earth?; couldn’t Jean (who has just utilized her telekinesis to explode a missile) also float the jet down safely?; couldn’t Iceman (still Ice-BOY here, Shawn Ashmore) create a slide of ice?; the potential list of ‘saves’ goes on – yet, it’s Airport ’75 up in that converted Blackbird and Our Man Charlton ain’t nowhere in sight. Instances like these really make you wonder whether you ARE on the Right Side, rooting for these insensate clowns, when the ostensible Bad Guy – grandiloquent Magneto – is the only one with any brains, balls or mutant clout to actually save the jet.

The DVD commentaries infuriate with their naivete: cast and crew misuse and completely misunderstand the word “evolution,” continually saying “evolve” where they should say simply “develop,” illustrating an utter ignorance of this world-shaping concept. Evolution is a process by which mutated genes, if they enable an organism to better adapt to its environment, are “selected” and passed on. Less-adaptable organisms are leached out of the pathway of Life vis a vis “natural selection.” Not being an essay on Evolution per se, this skeletal description will have to suffice to illustrate the ingenuousness of terms like “character evolution.”

The DVD also bludgeons viewers with the unsubtle message of tolerance. As if the raison d’etre of this movie is to promote tolerance and not to make sinful amounts of exploitative cash. By exploiting a minority existing in fantasy, they audaciously attach this analogy to world problems, and then pretend they care. The fact that this movie issues from one of the most insular, in-tolerant places on earth – Hollywood – makes that “message” all the more hypocritical and straight-up shameless prevarication.

The X-Men’s tolerance theme has nothing to do with why this film was made – the current rash of superhero movies is not being voraciously consumed faster than they can be made because audiences wish to imbue themselves with spiritual elevation; no, superhero-mania is the latest fad in a long line of film fads – remember all those war movies after WWII?; all the westerns of the forties through sixties; the cop films of the seventies; slasher films of the eighties; the genres of “baseball,” “family,” “romantic comedies,” et al. Superhero films now join the carousel of bankable corporate products – because the generation who grew up enamored with comics is now at an age where they are making the major business decisions in the world. So please – spare us the faux-philanthropy and get on with entertaining us for our cash.