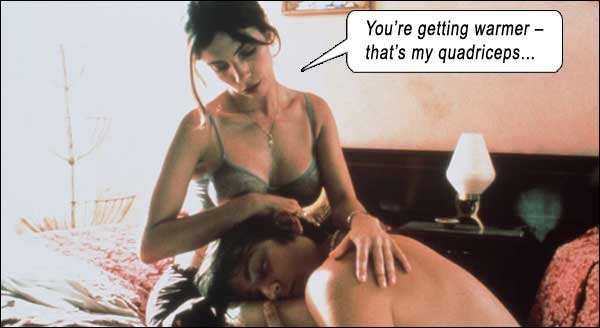 Putting the “coming” back in coming-of-age.

A road trip of self-discovery (aren’t they all?); two impulsive, inexperienced teens, a strife-torn Mexico, several backstories which would kill a horse – and a magnificent rack.

Y TU MAMA TAMBIEN (“And Your Mama Too”) reeks of everything that makes an independent film good (full-blooded characters, unrushed storyline and editing, no CGI, and superb acting, in that naturalistic vein that “movie stars” find so hard to slip back into once they’ve been told how important they are to the economy); yet it simultaneously exhibits one of the intrinsic problems with independent films – losing focus due to a breadth of scope uncalled-for in a simple, yet effective, tale.

It is as if writers Alfonso Cuarón and Carlos Cuarón try too hard to give us motivation for their three main characters, inserting excessive social context to the point of irrelevance. As our three protagonists meander down the Mexican coast, so too a disembodied narrator (who is not part of the tale, but some kind of omniscient entity) meanders off script completely, describing unrelated, non sequitur tidbits (a car accident from ten years ago; a fisherman who ends up a hotel janitor; the history and eventual bacon demise of pigs which invaded a beach camp). With no evil Big Studio to curb the padding, to hone the focus, director Alfonso Cuarón seems to be trying to cut his Bohemian Rhapsody.

While their teen girlfriends tour Europe, best friends Tenoch (Diego Luna) and Julio (Gael García Bernal) do what every teen male would do in their position – seek out other chicks. At a party, they zero in on one of their older cousins’ wives, the statuesque, magnificently-endowed Luisa (Maribel Verdú), inviting her on a road trip to a mythical beach, fully intending to seduce her before their fraud is uncovered, yet not having the slightest clue how to go about it.

Careful what you wish for – you might just get it. The boys attain an understanding of how the seemingly simple physical act of sex can be so demanding psychologically, as the experienced Luisa first seduces Tenoch (in a sense-glutting, euphoric first-time scene straight out of Penthouse Letters) and the next day raunchily straddles Julio. Arguments, confessions (including the admission by both boys that each of them slept with each other’s girlfriend), juvenile standoffs, drunken three-ways, bring Luisa, Tenoch and Julio closer together during the journey, but separate them forever after the trek. 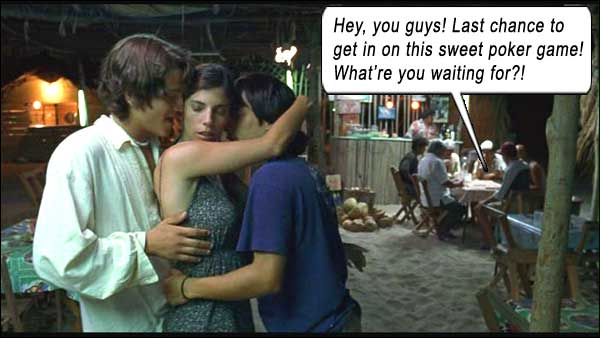 Here is a film where sex is not depicted as dirty, nor is it sacrosanct. There is no mood lighting or preparation. It just happens. In this movie (as in Life), sex is simply a normal part of growing into adulthood – no matter what Pat Robertson and Jerry Falwell say. It is the “social protocol” we have set up around sexual encounters that is anything but normal. In ostensibly becoming “civilized” homo sapiens have complicated a facility which every other animal on earth easily incorporates into their lives.

As if to hammer home the normalcy, the movie opens with Tenoch and his girlfriend, entwined in naked afterglow, presaging the coming storm by each voicing their infidelity insecurities, coaxing promises from each other that they will never do it with any other ethnicity – which is all moot, we are to learn, as neither of them is experienced enough to have assessed whether they would want to do it with other ethnicities in their short period of carnal awakening.

No other species ponders sex or death as much as we humans. And this movie presents a liberating, refreshing view of what brought us to this point in our evolutionary development – fucking: it is offhanded, it is quick, unsacred, unpracticed; no preaching, no finger-wagging, no condoms. Any kind of moralism is left to the viewer to glean – or not.

Magnificent racks can only help the decision.