The Year of Living Safely.

Either Jack Black is being reined in with a poor script, squelched by a conventional director, or he’s just plain gettin’ too old for this shit. 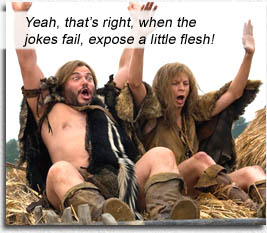 Maybe a combo-wombo of all three? YEAR ONE is a missed comedic opportunity, crying in the wilderness like Charlton Heston as Moses; a biblical comedy of pamphlet proportions.

Black is Zed, an inept caveman hunter; his best friend is Oh (Michael Cera), a willowy gatherer from the same small tribe. To score a tribeswoman, Maya (June Diane Raphael, almost more luminous than Maggie Gyllenhaal in DONNIE DARKO), Zed eats of the fruit of the Tree of Knowledge (what are the odds it’s right near their village?). Zed and Oh are subsequently banished from the village – not by God but by their tribe – and what started as a promising premise (a comedy featuring cavemen with modern day sensibilities) loses itself by expanding way past its time period; past its Use By date, if you will.

Every time Zed and Oh meet new characters on their banishment trek, the characters are in a further evolutionary epoch – for example, the first people they encounter are Cain (David Cross) and Abel (Paul Rudd), with writer-director Harold Ramis himself cameoing as Adam. One funny night in Genesis and the next day, Zed and Oh encounter Greek soldiers, circa 3,000 BC, led by Vinnie Jones (they look like Romans, but Ramis tells us the costumes were researched as Greek). Then we’re back to biblical times when Zed and Oh meet Abraham (Hank Azaria) and trek to Sodom. 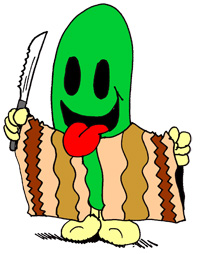 Hank Azaria bludgeons us hilariously as Abraham, cutting his words like a machete (channeling George C. Scott’s Abraham from THE BIBLE: IN THE BEGINNING, 1966), as he would start cutting foreskins on a whim for the sake of honoring his god. Christopher Mintz-Plasse (aka McLovin) is Isaac, the son who was saved from being a human sacrifice by “an angel” in the bible, but here, by Zed and Oh. (Like McLovin, Isaac tries to scam liquor cos he’s too young.)

Olivia Wilde is the princess of Sodom (chosen as Maxim’s Hottest Female of 2009 – guess there’s no accounting for taste – if a woman is that flat, is appearing topless any kind of coup?), who really has nothing to do except pretend to be hotter than June Diane Raphael.

YEAR ONE takes no risks – of course there are funny moments, these are great comedians – David Cross’s constant underhandedness, Azaria’s obsession with circumcision, Platt’s obsession with body oil, and a few zingers that make the trailers. But I had higher hopes, considering Judd Apatow is one of the producers.

Besides a watery questioning of organized religion, YEAR ONE resolves with little fanfare and nothing interesting to say.

An Alternate Ending on the DVD shows the destruction of Sodom. That might have worked better than the lame theatrical release. If you’ve got nothing to say, at least say it loud with fireballs.