In YES MAN, anti-social Carl (Jim Carrey) has been sinking lower into negativity since leaving his girl, Stephanie (Molly Sims), making dumb excuses not to attend any social events with his friends, turning down loan applications at his job, saying ‘no’ to life in general, spending every night blankly watching DVDs in his apartment. Kinda like you’re doing right now… 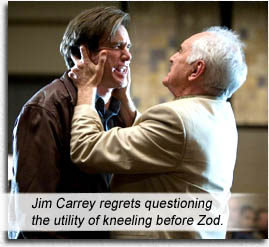 One day he meets a crazy coot friend (John Michael Higgins), whose life has changed drastically due to his allegiance with a group who say Yes to everything. Carl attends a Say Yes meeting – overlorded by guru Terrence “Welcome to Mind Head” (Terence Stamp) – and accepts the challenge to Say Yes, to be a Yes Man.

And he finds that saying Yes leads to myriad life-changing possibilities, money, success and, of course, panty, in the form of insipid Zooey Deschanel. (The tryst with his 70-year-old neighbor who insists on “pleasuring him sexually” doesn’t count! Oh, great gums a-mighty! How that doesn’t count!)

YES MAN marks Carrey’s return to his forte – that plastic, elastic, bombastic spastic who refuses to grow up.

It is obvious which Carrey movie YES MAN resembles – LIAR LIAR (1997), where a birthday wish from his son forced Carrey to Tell the Truth for 24 hours. No such mysticism here, which is this movie’s saving grace. Carl’s decisions to Say Yes are made under no duress or magic – just a leering curiosity to see where it all leads.

And the explicit message is very succinct – that being positive is better than being negative (just don’t tell that to a person with HIV); that it should not be a compulsion or a rule to Say Yes, but a decision; that it opens up possibilities that might not have been created had you said No. Simple.

A light-hearted film which doesn’t even annoy me when Carrey and Deschanel trip through the usual romantic arc of “boy-meets-girl, boy-loses-girl, boy-makes-assface-of-himself-to-get-girl-back” which only proves YES MAN advocates the same tired, insidious message of procreation guised as something wondrous and mysterious.

How difficult can it be, Humans? When it comes to sex, just say YES.