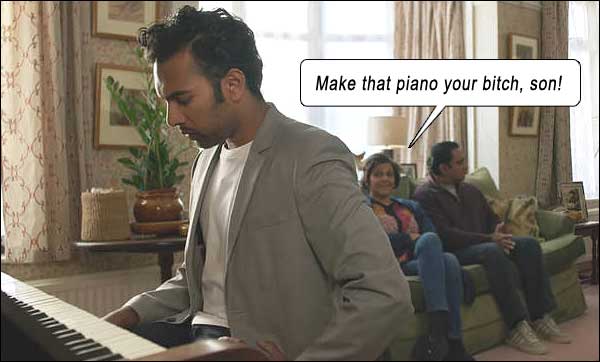 When a struggling musician wakes up in a world where The Beatles no longer exist – and he is the only one that remembers them – he cashes in by “writing” their songs and rising to superstardom. YESTERDAY takes many interesting turns, and one gigantic stupid one.

Jack (Himesh Patel) is an instantly-likeable loser; a guitarist, pianist, and amiable crystal-voiced tenor, with a mourning-face to die for. (And I love the fact that an international mainstream movie cast a Brit of East Indian descent as its leading man!). His love interest is paler-than-milk Ellie (Lily James), glowing like she’s in a constant state of ovulation.

The breezy plot reels us in: set in the English county of Suffolk, young singer-songwriter Jack is at the end of his rope, about to throw it all in, when something extraordinary happens. Cycling home from another dismal gig one night, a worldwide blackout occurs, and Jack is hit by a bus. He awakens in a hospital bed, Ellie by his side. (We find out she is not The Girlfriend but his “manager,” booking gigs and Friend Zoning him while giving him Meaningful Looks. More in a moment on how this clunky “romance” ends up derailing this fun movie.)

When Jack is gifted a new guitar by Ellie, he eases into a beautiful rendition of The Beatles’ Yesterday. All his friends seem to think it’s one of his original songs, no matter his assertions that it’s by The Beatles – which no one seems to have heard of. Is this the biggest practical joke in the world or what?

Via Google and other clues, Jack soon discovers The Beatles do not exist. Other things are missing, like Coca-Cola and the band Oasis. He attributes this anomaly to the world blackout. What a great fish-out-of-water premise! In 2019, we are so conditioned to parallel timelines and alternate realities that it only takes a small step to get on this ride.

Jack smells a pathway to success. He learns Beatles songs from memory (a pleasure to see this montage, where he fitfully recalls chord progressions and lyrics; he’s not a prodigy, just a very good musician, with a great ear), passing them off as his original compositions. Then performing these songs (with solo guitar and voice) at various gigs around town – and running headlong into the reality of exposing immortal music to plebeians. Meaning that even if you played inherently extraordinary songs to a public that has not been conditioned to accept them as aesthetic commodities, the songs would go over no better than any of the two-bit covers you play, or like your own unknown original songs that no one cares about except you. It really IS all about the marketing and distribution.

So, Beatles songs all over the soundtrack. Oh, yes please! With Beatles nuggets – there’s Ellie (as in Rigby), Jack’s roadie Rocky (as in Raccoon, played by Joel Fry), his bus accident occurring at the climax of Day In The Life…

So far, YESTERDAY is doing everything right. We want Jack to succeed, yet we can see the fragility and moral dilemma in the continuance of this Beatles charade…

A smalltime studio owner, Gavin (Alexander Arnold), records Jack. No mention of payment, Gavin probably doing the work for little or no money, or to pad his résumé, although there IS a tacit girl-as-prize exchange bubbling under, as Ellie attends the sessions and openly flirts with Gavin. (More on this indecency later.) 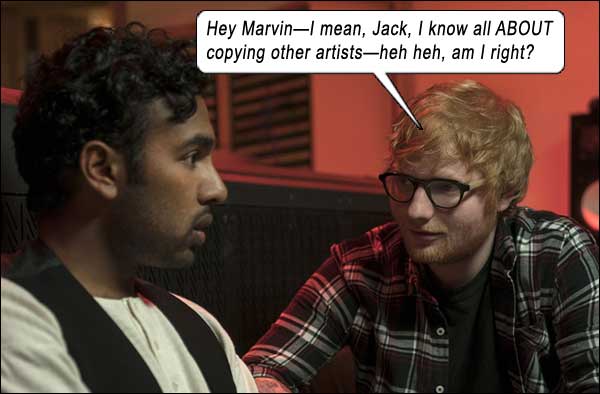 All I knew of Ed Sheeran before this movie was that he had the biggest poster in the toilet of the studio where I work. And I had heard his song that sounded like Marvin Gaye’s Let’s Get It On (btw, totally ripped off!). Playing himself, Sheeran is the real world star (of our reality and the movie’s reality) that lends cred to this fantasy endeavor, drawn by Jack’s “songwriting skills” and taking him on tour as a support act. (At this point, I have to point out the annoying lack of a backing band for Jack. I understand the cinematic storytelling device of leaving the stage bare so that other musicians do not distract from Jack, but with Jack on giant stages supporting Sheeran, any management company worth their percentage would force a backing band on him to sell his songs more efficiently. But no. There’s Jack in front of 5,000 people with a solo guitar. The filmmakers think we’re stupid. And later, when Jack does have a band, we never ever see them in the dressing rooms, never see them rehearse, he never even says hi to any of them when he walks onstage; hell, he doesn’t even do a count-in – just launches into songs, vocals and band straight in without any pitch notes. Big demerit points, but nowhere near the film’s biggest unforced error to come…)

Kate McKinnon (SNL) is Debra, a slimy record executive who signs Jack, promising him the world, but telling him plainly it is a poison chalice; that with this devil’s bargain, there is a different level of bad things that comes with this insane level of good things. Jack clearly says, “I want the chalice,” his mourning-face exemplifying his inner struggle…

Although, if Jack feels a little dirty playing songs that are not his, a mysterious person from Jack’s own universe thanks him for his audacity, with a very profound blessing, “The world is much brighter with The Beatles in it.” This was actually my tearjerker moment.

Written by Jack Barth and Richard Curtis (BLACKADDER, LOVE ACTUALLY), directed by Danny Boyle (TRAINSPOTTING, SLUMDOG MILLIONAIRE), YESTERDAY gets so much right in its first act, that it is surprising how much it gets wrong once it starts to mud slide into rom-com. For example: when Jack first played Let It Be to his oblivious folks, I loved the little touch of him plinging the high C chord before he starts – giving himself the pitch, then starting the vocals and music together. Meaning: in the same movie, they regard us as musically knowledgeable and as musical twats.

Himesh sings and plays! From all accounts, Himesh performs his musical passages live on camera. There are most likely occasional overdubs, but the majority of the performances are authentic, meaning he’s as much musician as Paul McCartney or John Lennon – he’s the real deal. And – except for that “count-in” aspect – it all looks right, sounds right and feels right. 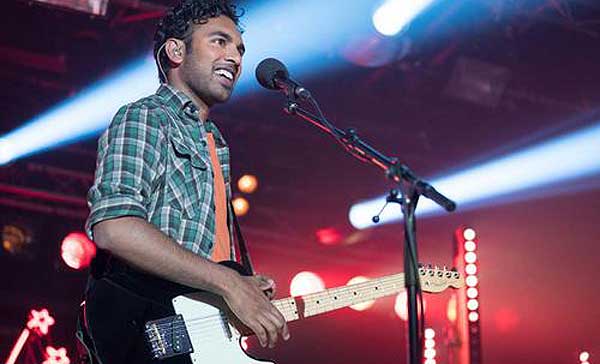 Life imitates Art when Himesh goes on JIMMY KIMMEL LIVE and performs Yesterday with an acoustic guitar and string quartet– Waitaminute! Why is this actor performing a cover song on a national talk show? Isn’t KIMMEL (and all other talk shows) a forum for musicians to showcase original music? Himesh has that same look of bewilderment on his face, because now REAL LIFE is doing to him what they did to Jack in the movie – honoring him for performing someone else’s songs!

YESTERDAY devolves to an insufferable romantic comedy, with contradictory mixed messages, hypocritical behavior and unctuous motivations, with Ellie giving Jack an ultimatum of Career Or Me. Though they’ve been Friend Zoning it for 20 years, seems she has crushed on him since grade school when he performed Oasis’s Wonderwall, and now doesn’t want him disappearing into the wormhole of superstardom. And the filmmakers create a dilemma where none exists; implying wealth and fame cannot go hand in hand with love and happiness. Yes, but: 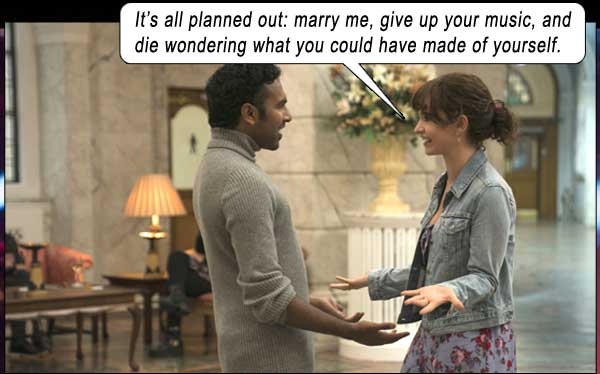 In all the reviews of YESTERDAY, you will read of its “underexplored premise,” because all the interesting turns the film takes (two sinister types following Jack around – maybe from his reality?; Jack’s songwriting contest with Sheeran; Jack on THE JAMES CORDEN SHOW where James asks him to “Write something now” and Jack plucks out Something on guitar; Jack meeting a living legend), end up squandered in the sludge of the movie’s grand message –

Why stop with the tired clichés now? Here comes the Bitch Running Through Streets to stop a lover from leaving. Only the bitch – is Jack. And when he arrives at Emasculation Central, Ellie hasn’t left. Of course. Cliché big or go home.

It’s like the filmmakers created this fun premise and didn’t think it through; didn’t consider what type of person would do what Jack did… In polite society that person would be called – a fraud! A charlatan. A grifter. A criminal! When Ed Sheeran humbly proclaims Jack the winner of their impromptu songwriting competition, consider that Sheeran actually composed a new song, while Jack simply played something already written by someone else (The Long And Winding Road). He cheated! If it weren’t for him being the leading man, and we being conditioned to support him, in any culture, unequivocally and without doubt – Jack is the Bad Guy!

If the filmmakers were this confused about their characters, maybe they should have named the movie what Paul originally called Yesterday – Scrambled Eggs.

The filmmakers cannot possibly let Jack “get away” with his fame and fortune, earned through the sweat of another artist’s balls. Jack’s only way to remain untainted is to refute his riches and yet remain happy. But how to keep Jack happy if he fails at music? – Ah, pussy! Give him the girl, take away the riches.

It’s not even a spoiler. It’s the FORMULA.

Ultimately, the movie’s shallow denouement simply mirrors the song itself! Despite being an immortal song, the first two verses of Yesterday are existential laments, and the third verse throws away all the gravitas – for pussy:

And there is no moral dilemma, if Jack considers that the Beatles songs he “remembers” never existed in this version of the world – which means they are “original”; pools of sorrow, waves of joy, drifting through his opened mind, possessing and caressing. He simply has to accept the fact that in his reality, HE is that phenomenon that was The Beatles in our reality. And who knows, maybe in our reality, John Lennon and Paul McCartney were remembering songs from ANOTHER reality and claiming them as original?! I mean, the songs were too good for two 20-something saps from Liverpool to write! Right?? Their words flowing out like endless rain into a paper cup, to slither wildly as they slipped away…

Maybe the writers of this movie have unwittingly discovered how The Beatles pulled off their grand scam on humanity with someone else’s songs from across the universe!…

Songs featured in
YESTERDAY
Yesterday
Let It Be
I Want To Hold Your Hand
Something
Hey Jude
I Saw Her Standing There
Carry That Weight
Here Comes The Sun
The Long And Winding Road
Help!
She Loves You
A Hard Day’s Night
In My Life
Back In The USSR
All You Need Is Love
Ob-La-Di Ob-La-Da