Today is a good day to die.
— attributed to Crazy Horse at the Battle of Little Bighorn 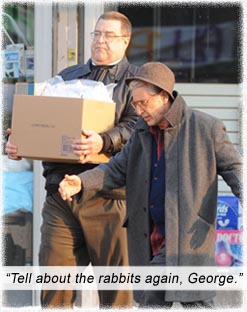 Idiot Sarah Palin might be inclined to call him a “Death Panel.” Doctor Jack Kevorkian. If you know the name, you know the game: euthanasia, assisted suicide, mercy killing. And your mind is set one way or the other. This movie won’t change it, whichever side of the razorwire fence you’re on.

YOU DON’T KNOW JACK features Al Pacino as the good doctor (pathologist, painter, inventor, musician), detailing his right-to-life activism from his first assisted suicide patient to his eventual incarceration in Michigan in 1999.

Known as “Doctor Death” (an epithet which Kevorkian humorously embraces) Kevorkian’s credo was that he was not causing death, but ending suffering. Patients who were terminally ill or who suffered chronic pain and who REQUESTED TO COMMIT SUICIDE WITH HIS AID were compassionately helped by Kevorkian to end their suffering. If Kevorkian assessed that someone was merely clinically depressed, he declined to assist them in their requested deaths. It’s as simple as that.

Every time the phrase “saving a life” is used, we imagine it is tantamount to “preserving” that life, but Kevorkian forced modern society to raise the question, “What is life except the quality of it?”

Al Pacino gives the Armenian-American Kevorkian an accent like Frances McDormand in FARGO, but he brings his A-game, so we don’t snigger too loudly into our palms. He is aided by like-minded individuals, his sister Margo Janus (Brenda Vaccaro), civil rights activist Janet Good (Susan Sarandon) and medical lab technician Neal Nicol (John Goodman).

Danny Huston plays Kevorkian’s power lawyer, Geoffrey Fieger, who won trials for Kevorkian and kept him out of jail from 1994, when he first started representing him pro bono. There is a terrifying subtext to this movie: as soon as Jack fired Fieger and tried to represent himself with a timid court-appointed attorney, he went directly to jail for eight years on second-degree murder. What does that say about the legal system that is supposedly meting out “justice”?

Written by Adam Mazer (BREACH, 2007), directed by the great Barry Levinson (whose recent work has been shaky, starting with ENVY, 2004), YOU DON’T KNOW JACK adopts a brave stance in sympathizing with Kevorkian – because an issue like euthanasia is bound to draw inculcated, ignorant and fanatic detractors.

Detractors abound in the movie, once again throwing up straw man arguments (“Are you going to kill everyone in a wheelchair?”) and irrelevancies (“Have you no religion? Have you no god?”).

Firstly, Kevorkian was not on a crusade to kill disabled people, or people who did not subscribe to his ideology (unlike the Christian Inquisition or the Christian Crusaders or the Christian Vatican), and he lamented the media and activist groups “keeping death alive” by vilifying him so simplistically; secondly, his aid to people who were cognizant of their agony had nothing to do with the mysticism of religion.

The paradox is (as Bill Maher also notes): the “christians” who supposedly believe that paradise awaits on the other side of death are the most vociferous in their attacks on the good doctor who is sending “souls” to this purported paradise. They say clinging to life is the “christian” thing to do; they say “suicide” is frowned upon by their deity; they will do anything – financially, medically, psychologically – to stay alive even though their professed “belief” is that life is merely transitionary. Shouldn’t their vitriol against Kevorkian, suicide and even murderers be negated in light of their “belief”? Yet their damnation of Kevorkian conclusively proves that at their core – none of them believe.

Either that or these snide christians just cannot abide anyone making it to paradise while they’re still stuck in this wretched existence. Which is also a case for not being very christian at all, innit? Brings another dimension to “misery loves company.”

Fieger could arrogantly keep Jack out of jail because of the technicality of how Jack performed his assisted suicides: with the patient wearing a breath mask leading to a canister of poison gas, the patient would be the person who performed the final action of opening the tube to inhale the poison gas.

Fieger even made a deal with a new D.A. – that Jack would not be bothered by the law if Jack kept a low profile. That wasn’t enough for Jack. He wanted his medical policies respected and incorporated into state laws. Not for money – he did most of his work for free. We might say, Let well enough alone – but whenever anyone is made to feel like a second class citizen, when their rights are denied, when they are shunted into darkness, when their sense of integrity is impugned, their outrage is fully justified. It’s what makes America great; so say all those who would be the first to deny inalienable rights and free speech…

Then Jack made his fatal mistake. We might think that mistake was in filming himself giving a lethal injection to a patient and then publicizing that video. Whereas previously, his hand was not the final stroke in a patient’s death, now it was – and it was on film. Courts regarded it as evidence of murder, not assisted suicide. But though that was an inadvisable action, it was not Jack’s biggest mistake. The thing that eventually got him convicted was getting rid of his lawyer, Geoffrey Fieger.

For some reason Jack believed he could represent himself in court, that he could “put the system on trial” if they could only hear his case directly from him. Apparently, he believed the only way to take the issue to the Supreme Court was to get convicted and then appeal. Canny prosecutors promptly crucified Jack Kevorkian, while Fieger watched from the sidelines, fuming and helpless.

So if you think Kevorkian’s euthanasia clashes with The Law were about actual ethics and morality and religion and humanity, instead of the juvenile stupidity of legal technicalities… you don’t know jack.

“During the 1990s, Jack Kevorkian was undoubtedly the most well known assisted suicide and euthanasia advocate in the world. A retired pathologist from Michigan, Kevorkian made headlines internationally when he undertook a well publicized assisted-suicide campaign between 1990 and 1998 that reportedly ended the lives of approximately one hundred thirty people. Some of those whose deaths Kevorkian facilitated were terminally ill and diagnosed as having less than six months to live, but most were disabled or chronically ill. According to autopsy reports, four of the people whose suicides Kevorkian helped had no discernible organic illness.”