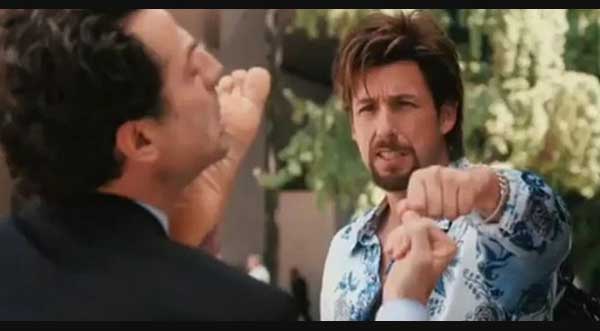 YOU DON’T MESS WITH THE ZOHAN messes with our brains. Because it’s actually funny. Messing with our preconceptions that Adam Sandler is a mindless jerk, writers Sandler, Robert Smigel and the great Judd Apatow give us ridiculous piled on absurd and nipple-pinched by insane. And thankfully, mediocre director Dennis Dugan (his imdb directorial ratings read like a prescription for beige) doesn’t ruin things.

Israeli Special Forces operative, Zohan (Sandler) is sick of his superspy life of capturing and killing Palestinians in holy wars, so fakes his death and sneaks into America on a plane (“the terrorists” have shown us how easy that is) to follow his dream of styling hair in New York.

His worked-out body exposed in wild abandon, his jock-pouch bulging with cushioning bush, his surfwave Avalon ‘do rivaling Ace Ventura’s for creamy goodness, Sandler has found his comedy stride in ZOHAN, not stooping to his implausible jutting-jawed jerk to “try” to be funny. His Middle Eastern accent is so perfect, I thought I was listening to Osama bin Laden.

Now if only he could get the stanque of talentless tool Rob Schneider out of his skirts. Schneider is an olive-skinned Palestinian taxi driver. Okay, let’s talk about something else.

Zohan gets closer to his dream of making everyone “silky smooth” as he becomes a legend in Dahlia’s salon styling old ladies’ hair – which involves more sexual healing than actual haircutting. Back in HAPPY GILMORE (1996), Sandler nonchalantly plonked that old Japanese lady – here, he takes geriatric sex to a new level of eeuuw!

Zohan’s Palestinian nemesis, The Phantom (John Turturro, also with a Middle Eastern accent that would warrant jihad anywhere outside of this movie) runs a successful franchise in America called Phantom Muchentuchen. Pointless, but damn, it sounds funny. Israeli Zohan and Phantom must team up to defeat a common enemy – racist Americans against Arabs. Film is chock full of snide political observations about the idiocy of the Palestinian-Israeli conflict, which I doubt Sandler’s target audience would grasp. And considering the Israeli-Palestinian conflict shows no signs of abating, we can safely say the Israelis and Palestinians must therefore have the brain capacity of Adam Sandler fans.

Cameos by Henry Winkler, Chris Rock, and the highly unfunny Kevin Nealon, who does the impossible – no, not bring peace to the Middle East – he manages to be unfunnier than Rob Schneider.

The Itty Bitty Titty Committee.
Zohan’s padded jockstrap is a big gag here. Unless you’re wearing it for sports protection, a padded jockstrap simply misprepresents a penis as larger than it is. So in real life, very few (straight) men actually pad themselves.

Yet flat-chested women (vain and insecure to the last shrike) wear padded bras in public specifically to misrepresent their boob size and fullness. And no one laughs at them. Only surgery or pregnancy can make their mosquito-bite raisins actually bigger, yet they insist on the ludicrousness of the padded bra double standard lie.

A mosquito-bite woman once admitted to me she wore the padded bra “because it makes me look bigger.” In other words, it serves the same purpose as all your other accoutrements – faking you more attractive than you actually are. (So what happens when the opposite sex unhooks the fakery?)

How hard would a woman laugh at me if, when she slid my pants off, she found a rolled-up sock down there?

There’s a fundamental difference between you and me, woman with tiny body parts: my tiny parts actually DO get bigger. Who’s laughing now?