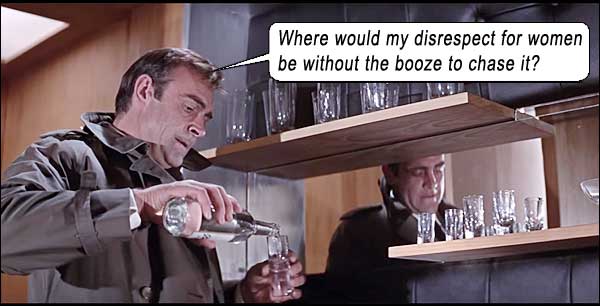 …but you get endless chances to escape…

James Bond in Japan! Pretending to be Japanese! It’s as horrifyingly racist as you think. And then some.

When Jerry Lewis imitated an Asian, he used to squint his eyes, put in buck teeth and bow a lot. It was a broad hilarious caricature – but it was racist as hell, though probably not as racist as the American government enslaving Africans, creating Japanese internment camps and electing Dumbo Donald. But racism plumbs a new low in the James Bond actioner YOU ONLY LIVE TWICE when Sean Connery (as Bond for the fifth time) undergoes an operation to give him epicanthian folds (i.e. pull his eyes back) to go undercover as a Japanese man, which puts Jerry Lewis and the American government to shame! 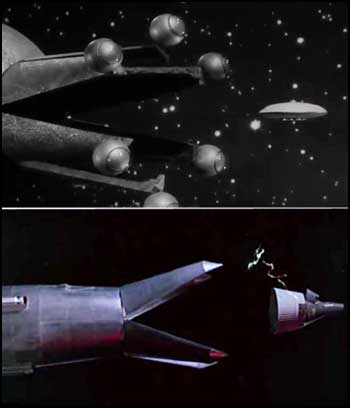 Even as Bond takes racism ten steps backwards, the times they are a-changing and leaping heavenward, as the real life Space Race was well underway between America (at the time, between their Gemini and Apollo missions) and Russia (in the midst of their Soyuz program). So the movie’s cold open gives us a reasonable visual of a manned space capsule in Low Earth Orbit. Called Jupiter 16 (now they’re just copying LOST IN SPACE!). And then – just like in the second ever LOST IN SPACE episode “The Derelict” – a big black spaceship swallows the Jupiter in the same manner, like a squid opening its tentacles.

The Soviets are blamed. Bond is killed in bed. Opening titles, volcanoes and naked women, while Nancy Sinatra croons You Only Live Twice.

Lewis Gilbert directs (the first of his three Bond films), and Roald Dahl (Tales Of The Unexpected) writes (from the 11th James Bond novel by Ian Fleming, published 1964). The plot twist style of Roald suited Bond being killed off in the first minutes, only to be resurrected after a “burial at sea” in which 2 divers recover the wrapped body and we discover Bond inside with scuba gear; taken onboard a submarine where he rendezvouses with MI6 – M (Bernard Lee) and Moneypenny (Lois Maxwell). Ah, these spies and their secret comings and goings – although no explanation is given as to how Bond survived his “murder.”

Bond is assigned to Tokyo, Japan, and meets his contact Henderson (Charles Gray). For the short time the production is in the packed arena with sumos in the ring (squeezing in that local color!), it seems like an excessive set piece, but I guess the funders of producer Albert Broccoli’s EON Productions were banking on this fifth Bond film to continue the moneymaking legacy. Toho Studios (Godzilla’s home) helped, I’m guessing with the miniatures of the giant SPECTRE hideout…

Bond kills Henderson’s assassin. Decadent Western Spock Chops against ninja skills. Hmm, I guess Decadent West is superior! Bond disguises himself as the Asian guy he killed, to fool the Asian guy’s driver. He puts on the Asian’s coat and hat – and surgical face-mask – and pretends to be injured as he climbs in the car; the 6’2” Bond easily passing for the 5’6” Asian. The driver even carries Bond over his shoulder into the lair. Only when he puts Bond down, does he realize what a total fucking idiot he’s been. [That face-mask: it’s not like Assassin was protecting himself from covid – this is the one and only time you will ever see a face mask in this movie, purely for the ruse of Bond’s disguise. Surprised that Roald would resort to writing like a 12-year-old.]

Maybe that’s why the movie was so confident Bond could be turned into an Asian later – because he was obviously so close to looking Asian anyway!

Also, Bond reminded Moneypenny that he “topped the class in Asian languages.” Well, if he said more than “domo arigato” maybe he’d convince us. (Come on, Bondu-san, hit us with more phrases than the casual visitor to a sushi restaurant.) Strangely, when the Japanese speak in their native tongue, there are no subtitles. I’m surprised this racist movie didn’t insert, “Brang! Brang!” every time the Japanese were shooting.

Aki (Akiko Wakabayashi) takes Bond to meet the head of the Japanese Secret Service, Tiger Tanaka (Tetsuro Tanba), where he is tricked onto a trapdoor, falling onto a slide that deposits him on a seat in Tanaka’s office. Why behave like the villain? Couldn’t you have escorted Bond down some stairs like a normal person?

Tanaka offers Bond a bevy of Japanese women in granny panties to bathe him, with the advice, “Rule No. 1 is: Don’t do anything that can be done for you. Rule No. 2: In Japan, men always come first, women come second.” Bond, of course, revels in this misogyny, which reminds me of Rule No 3: Live it up until this sexism catches up with us. After the bathing handjobs, Aki enters to fuck Bond proper. No reason. 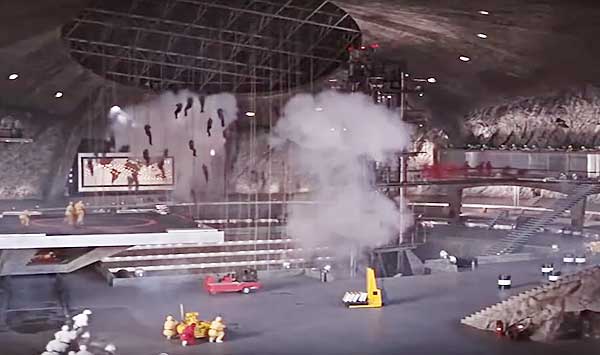 Ninjas from the ceiling, teddy bears in the cavern, the massive scale of the inner volcano lair.

Bond at last uses an alias, Mr. Fisher, because remember that long-ago plot point about him being dead?… although the villains find him out quicker than if he just gave his real name. The whole point of that fake death was to root out the villains without them realizing he was still on their tail… but that plot point is forgotten completely – until Blofeld gets the line, “You only live twice, Mr. Bond.” Was it worth it? No.

The lone white girl in the movie, Helga Brandt (redhead Karin Dor, with a hairstyle like Nancy Sinatra) is tasked to kill Bond; she takes him up in a plane, ties him to a chair, threatens him with dental tools, unzips, fucks him, then parachutes out of the plane leaving him to die – honey, if that’s your idea of doing your job, it’s no wonder you get thrown to Blofeld’s piranhas.

Keep in mind, at this point, we still do not know the overarching plot. Events are just happening, and we presume that someone has a wall chart somewhere with pins and strings and newspaper clippings, keeping track. But LIVE TWICE suffers the same problem as all other Bond movies – nothing is ever tracked for the audience, and we are expected to hold a disparate series of events in our heads (some of which are irrelevant) and tie it all together.

Q (Desmond Llewelyn) appears in a serious scene, bringing Bond a mini-helicopter, heavily armed. Simply for an action scene with four helicopters chasing Bond. Tanaka shows Bond a picture of a ship whose name he doesn’t know. Bond tells the photoguy to enlarge the picture to see the ship’s name on its bow. You mean, Tanaka didn’t think to do that until Bond got there? The whole operation is so haphazard that when Tanaka suggests Bond turn into a Japanese person, learn the ways of the ninja, and marry a Japanese wife to infiltrate the villain’s lair – it sounds totally reasonable!

I swear this is as bad as blackface! An operation on the eye-folds, a tiresome wedding ceremony, a laughable ninja training montage (because Tanaka happens to run a ninja training school!), and Bond is ready to… be in a Godzilla movie? Oouwah!

There was some obtuse running gag about Bond’s normal-looking Japanese “wife” Kissy (Mie Hama) having the “face of a pig” but I think times have changed too much to discern the joke. The “wife” tells Bond their union is “just business” and scoots him to the couch. (Besides that redhead, Bond only deals with boring Asian girls with 12-year-old boys’ bodies. The prurient angle is totally lost on me in this episode.)

The plot is begrudgingly teased out inch by inch: from a hidden base in Japan, SPECTRE is kidnapping U.S. and Russian spacecraft, to trigger a war between the two superpowers, so that China can dominate the world. I dunno, if you possess a hijacking spacecraft that can kidnap both Russian and U.S. spacecraft without any resistance, sounds like you’re already dominating the world. Don’t let me rain on your parade with stone cold logic.

All Bond’s Japanese traits are lost as soon as the action starts in the subterranean volcano lair. He never uses any ninja skills and his eyes look pretty darn round again.

Donald Pleasence is revealed as SPECTRE Number One, Ernst Stavro Blofeld, whose oomph Bond gimmick is the scar down through his right eye. And his head is shaved. Yes, that was a gimmick back then! He is quite chilling in the role, soft-spoken and ruthless, but his visage has become so satirized (not just with Dr. Evil) that it’s hard to peer into the past and fear him through our modern lens.

He’s commanding his own space agency down here, without any clue on orbital mechanics, as spacecraft liftoff and land like children’s toys in the main hangar. 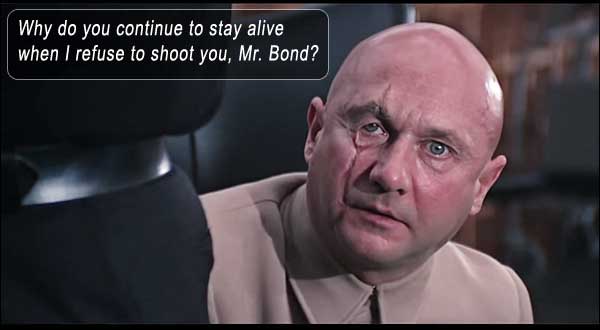 The climax is quite bombastic as Tiger brings 100 ninjas rappelling into the volcano, hundreds of Blofeld’s men in different-colored teddy bear suits shooting at the ninjas, who have all brought katanas to the big battle because wasn’t it Sean Connery himself who said something about bringing a knife to a gun fight?

Amongst all the ninjas in their black outfits, here comes Bond’s wife, in her white two-piece granny-panty bikini, as part of the assault crew on the volcano. Good strategy.

Meanwhile, Blofeld is having the usual hard time of simply shooting Bond in the head, training a gun on Bond and warning, “This is the price of failure,” and then shooting his own lieutenant who failed to kill Bond. Blowie – didn’t you just do the exact thing that you shot your lieutenant for? Failing to kill Bond? Even when he trains the gun on Bond again and says, “This is goodbye, Mr. Bond…” does he shoot? You tell me.

Bond ends up banging in a lifeboat again… that Kissy wife who said it was just business. I guess this is the payment for saving her country.

I Spy a trend…
James Bond is probably the most famous “spy” we know nowadays, but when the first Bond film was released in 1962 (DR. NO) it was riding a ‘60’s surge in the genre. A few examples (there are many more):

1960-1968 – SECRET AGENT (the song Secret Agent Man by Johnny Rivers was composed for the American version of this show, called DANGER MAN in the UK. The audacity of the writers to include the familiar Monty Norman Bond theme within their song! That’s how ingrained Bond was in world culture.)
1961-1969 – THE AVENGERS (British spy series – that co-starred two future Bond Girls, Honor Blackman and Diana Rigg)
1962 – DR. NO (the 1st Bond film)
1965 – THE SPY WHO CAME IN FROM THE COLD (hard Cold War drama)
1965-1970 – GET SMART (a satire on the genre)
1966-1973 – MISSION: IMPOSSIBLE (the Peter Graves series)
1966 – THE SILENCERS (Dean Martin’s first Matt Helm appearance)
1966 – AGENT FOR H.A.R.M. (bad enough to be skewered on MST 3K)
1966 – SECRET AGENT SUPER DRAGON (trying sincerely to emulate Bond, but ending up on MST 3K)
1967 – OPERATION KID BROTHER (aka OK CONNERY, starring Sean’s brother Neil Connery in a satire of the genre)
1967 – CASINO ROYALE (satire on James Bond himself)
1967 – YOU ONLY LIVE TWICE (Bond’s staying power confirmed, with the 5th in the series; it’s the real deal, yet in many ways, no better or worse than the many B-movies that emulate, plagiarize and satirize it)

Bond became famous for his gadgets and girls, setting a convention that many productions couldn’t match. Bond was ahead of the game in the ‘60s. Nowadays, in trying to ground the character in the real world, with Daniel Craig’s Bond being indistinguishable from Jason Bourne or Ethan Hunt (in the modern MISSION: IMPOSSIBLE series), Bond is not exactly eating the dust of his contemporaries, but is definitely no longer the pace car.