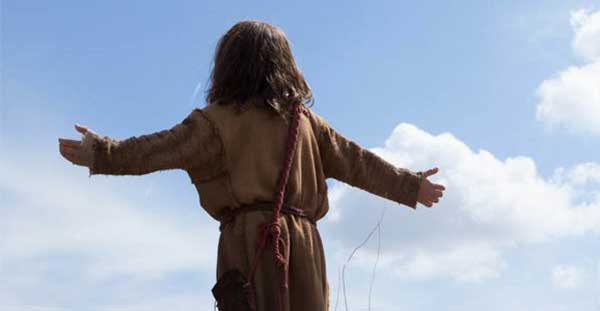 He’s not the Messiah. He’s a very naughty boy!
— MONTY PYTHON’S THE LIFE OF BRIAN.

And yea, 6,000 years ago, God did create the Earth. It took him two days, for he was a lazy god. And lo, Adam and Eve did eat of the fruit of the tree of knowledge in the Garden of Eden, thereby engendering Original Sin. And thus, 4,000 years later, God did send his only begotten son to die for the sins of the world… THE YOUNG MESSIAH is the story of that girlish boy.

And I have two questions:
1) Why did he take so long?
2) Why is there still sin?

Chronicling just one year in the life of seven-year-old Jesus of Nazareth, THE YOUNG MESSIAH still manages to cram more holier-than-thou into this one movie than any three Jesus movies combined.

The theme is young Jesus (Adam Greaves-Neal) trying to discover his purpose in life. Without quite understanding how or why, he openly performs “miracles” hither and thither (bringing a dead bird back to life, bringing a dead kid back to life, curing blindness, sounding British even though he’s from Israel, etc.), and wonders about his origins and ultimate destiny. Everyone treats him like some kind of magician, while his parents keep telling him he’s a kike, a yid, a heebie, a hook-nose, a kosher, a Red Sea pedestrian, but he knows there is something more. It’s symbolic of his struggle against oppression. [Ed. note: It’s symbolic of his struggle against reality.]

Young Adam Greaves-Neal is an astonishing actor, and purveys that imperious-yet-innocent attitude that is the bedrock of laying down holier-than-thou screeds. There is no Sermon On The Mount yet, but girl-boy Jesus sure slaps us upside the head with enough mystic hornswoggle to make a bible scholar break his quill off on the papyrus. He is called Jesus Bar-Joseph (due to elitist filmmakers thinking they have a handle on arcane Aramaic nomenclature), Sara Lazzaro is Mary Queen Of Scots and Vincent Walsh is her husband Joseph, the Patron Saint of Blue Balls.

Like most Jesus movies, MESSIAH takes it for granted we know the story, so it can dive into the plot of Jesus and his parents moving from Bethlehem back to Jerusalem after fleeing King Herod’s edict to kill every boy born there seven years ago. See? I didn’t have to explain Herod or the genocide of newborns – you know it. You just know it, from years of indoctrination – even if you’re not Christian!

Herod is dead. On the throne, his son Naughteous Maximus (Jonathan Bailey), a shoeless hippie with a very modern heavy metal ‘do, who has a penchant for slave girls with fantastic breast augs from the year 2016 A.D. Naughteous orders his centurions to kill every boy that is seven years old, because there is talk on the internet that the messiah survived the ethnic cleansing.

Heh, Romans. They’re the racist, untrained, cowardly beat cops of Biblical times. In any Jesus movie, as soon as they appear, we know they are the villains without any exposition, foreshadowing, evidence or action, and we sense they’ll kill you, just for being Jewish and Nearby. I mean, apart from the sanitation and medicine and education and irrigation and public health and roads and a freshwater system and baths and public order – What have the Romans ever done for US? But there’s an obvious spanner in the works.  You see, the lead centurion is Sean Bean as Biggus Dickus. A well-known likeable guy cast as the villain can only mean he is going to show mercy. In the almost not-gripping climax, when confronted with the public choice to cut down the young messiah or let him go, he makes his decision for Christ. I mean, literally. 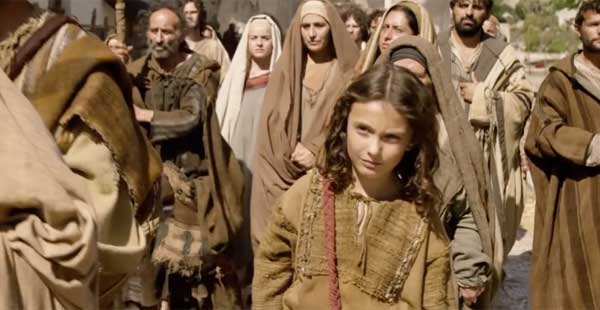 “Hmm, I like that line about ‘Blessed are the cheesemakers.’
I might use that in one of my sermons one day.”

Unlike all other Jesus movies, THE YOUNG MESSIAH keeps Jesus as a young boy. He doesn’t have to go through all that crucifixion shit to ruin his day. Although there are crucifixions aplenty of dirt-smeared guys in loincloths, lining the Roman roads as abundantly as Starbucks and McDonalds. (I’ve always thought it the height of incongruity to publicly crucify someone while leaving them the “dignity” of their loincloth. Like CRUCIFIXION itself is not humiliating and fatal enough, and like it’s not emotionally scarring enough for the relatives of the cross-straddler – having him naked, that’s the bridge too far? The height of gauche!)

Jesus, Mary and Joseph [not the swear words, the characters] travel with Joseph’s brother, Uncle Big Nose (Christian McKay), an affable doughy guy who is the audience’s voice. Jesus cures him of the disease of red spots by dunking him in a river, after which he proclaims, “It’s a miracle!” Calm down Big Nose, after thirty years in that filthy robe, that’s all you needed – a bath. They pick up a woman along the way, named Incontinentia. Incontinentia Buttocks. Just as they are being harassed by Romans, they are rescued by Old Sarah (Jane Lapotaire) from the People’s Front Of Judea, formerly the Judean People’s Front.

Apparently, this story is taken from the Gnostic Gospels (not that they make any more sense than the fairy tales of the King James version), so Jesus is magic long before the age of 33. Boy-Jesus asks, “Are they scared of me because I can do things no one else can?” The issue of being “the savior” is skirted often, never addressed. Jesus’s arc ends with Mary telling him his history, “I was just 14 when you were born.” (Which makes God a statutory rapist. Yet you people eat this shit up and tell it to your kids. Jesus, Mary and Joseph! [not the characters, the swear words] Note that even Perseus and Heracles from Greek mythology were also spawned by a god sexing a mortal woman. Still feel overweening privilege, Christians?)

In one of the great anti-climaxes, Jesus frolics on a hillside, narrating, “I think I’m here just to be alive and experience everything – even if it hurts,” Then he spreads his arms in the infamous Crucifixion Pose that is a metaphor for heroes who are sacrificing their lives for others – but he invented it, so I guess, no foul.