The trailers fooled us with witty asides and raunchy innuendo, but YOUR HIGHNESS is a fast-paced slow-brainer for people who like to hear swear words unsurrounded by actual comedy. 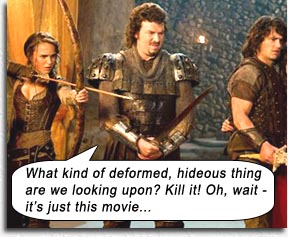 Not only sophomoric – uninvolving and uncomfortably devoid of laughs, with sloppy, predictable writing, direction and story; Danny McBride at his unfunniest as a slacker prince; James Franco as his epic brother (always returning from a Quest and making McBride look bad), doing justice to his melodramatic prince, yet the script not reciprocating; Natalie Portman wasting her talent as a hot warrior woman; talentless Zooey Deschanel not wasting anything she doesn’t have, but putting her lack of it to good use as a trapped princess with either big implants or a champion push-up bra. And Charles Dance as the king? Did he trip over in the dark and land on this movie contract accidentally?

Writers McBride and Ben Best think that by substituting jokes with swear words they’re going to get laughs. Surely a comedian as mustered as McBride knows better! 80% of the punchlines are characters exclaiming “shit” or “fuck.” PINEAPPLE EXPRESS, SUPERBAD, TENACIOUS D – all these excellent comedies make use of vulgarity stitched into the fabric of the humor. Here, the vulgarity IS the humor. Nay, the failed attempt at it.

The splash-phrase on the DVD cover says, “A hilarious, raunchy homerun,” by Scott Wampler of Examiner.com. Find that guy and kill him. He obviously has no discernment and therefore shouldn’t be allowed to live lest he utilizes his right to vote.

Sold as a medieval stoner comedy (which it isn’t – we see McBride toke but once), the story follows the misadventures of prince-brothers Thadeous (McBride) and Fabious (Franco) in their Quest to rescue Fabious’s betrothed maiden (the Talentless Zooey Deschanel) from villain warlock Leezar (Justin Theroux, also pretty talentless).

Movie Maniacs, my advice is to embark on a Quest – for another movie.