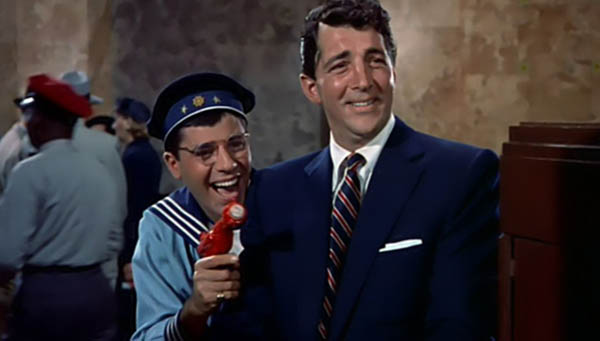 It would have been a very different series if they cast LOST IN SPACE with Dean Martin as Professor Robinson and Jerry Lewis as Don.

It Never Gets Old…

Opening scenes set up quickly that Noonan has to offload a stolen diamond to avoid cops on his tail. At first, he plants it on Bob. (And we see Dean has learned well from Jerry how to take pratfalls when he bashes into Raymond Burr’s bulk and goes crashing to the floor in one smooth slap.) Then Bob walks into a barber’s shop, where Wilbur is pretending to be a French barber. Cue barber-chair and egg-catching gags. Here, Noonan re-plants the diamond from Bob to Wilbur, then hires Wilbur to visit his wife’s apartment for a scalp treatment, to allow his wife the opportunity to snatch the diamond out of Wilbur’s pocket.

YOU’RE NEVER TOO YOUNG is the remake of Billy Wilder’s first directorial effort in 1942, THE MAJOR AND THE MINOR (starring Ginger Rogers in the Jerry role. Many would speculate that there is something to the fact that Jerry is once again in a female role, like his previous remake, 1954’s LIVING IT UP). The scalp treatment scene is where the original film picks up, and where that film starts to go off the rails almost immediately with its ingrained sexism and idiotic writing.

This remake has sensibly added the more compelling diamond plot, and Wilbur finds himself fleeing to the station with Noonan on his tail. Short on money for train fare home, Wilbur gets the idea from a decidedly old-looking kid to disguise himself as a 12-year-old, so he can pay half-fare. On the train, to avoid Noonan, Wilbur takes refuge in the cabin of Nancy (Diana Lynn), who, thinking he’s a kid, lets him spend the night in the lower berth.

The train gets bogged down, and who drives to pick up Nancy? – but Bob, her boyfriend. (What are the odds?!) Accompanying Bob is Gretchen (Nina Foch), who has the hots for Bob, but looks like his mother. She’s the governess at the school for girls where Bob teaches. (We presume he’s the Phys Ed teacher, as we see three seconds of him heading a calisthenics class where the students think he’s a dreamboat.) In the car, Bob croons a love song, envisioning Nancy, while Gretchen thinks it’s for her and snuggles. It’s gross, firstly because Dean’s insufferable songs are all placed so close together, and secondly, because she looks like his mother! 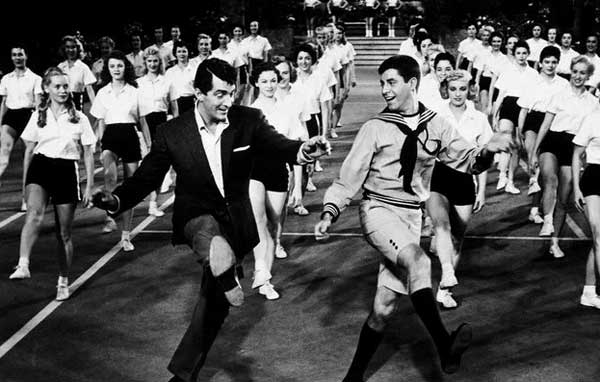 What it looks like when 100 women want your baby.

At the school for girls, Noonan is still poking around trying to get his hands around Wilbur’s throat, which necessitates Wilbur choosing to lodge in the safety of the school, rooming with Gretchen’s odd brother, Mike – an uncredited Whitey Haupt, who would steal his scenes from Jerry with his lemon-sucking face and his nerviness. (This roommate character in the original 1942 film was played by none other than Diana Lynn, who stars here as Dean’s love interest. Lynn’s first brush with Martin and Lewis was star billing above them in their first ever feature, MY FRIEND IRMA.)

Wilbur takes to calling his benefactors “Aunt Nancy” and “Uncle Bob” and we have to believe that they believe he’s a kid or the film fails. And everybody on the school board thinks he’s a kid. And all the girls at the school think he’s a kid as well. Dean and Jerry were both the same height (depending on reports, anywhere from 5’10” to 6’0”), but Jerry always stooped so that “the handsome one” could look taller. Here, he is constantly stooping.

Even for an absurdist comedy, there are distractions, time-warps and plot anomalies:

Though Dean is notably hilarious in this straight role, his songs are pretty unmemorable; there’s a big song and dance number with 100 girls plus Jerry and Dean, which is pretty good for its hard work and choreography. Jerry conducts a choir with Dean as lead vocalist, an inexplicable bit that emulates their unique club routine. And Jerry does a solo soft-shoe every bit as dynamic and sexy as Ginger Rogers in the original.

Thankfully, this remake quickly moves away from the romantic plot of the original – the pedophilic romantic plot, where everyone wanted to make the underage girl, including the star. Though they try to establish Wilbur in forbidden love with Nancy, the premise won’t hold, not with the diamond plot ever-present. And crooning Bob. 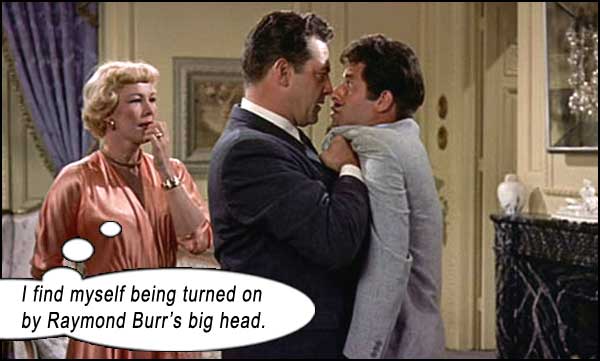 At one point, Wilbur falls into a pond with his schoolgirl escort Skeets (Mitzi McCall) and a couple of big swans flap around disturbingly trying to escape. Jerry stays in character by a thread as he shouts at one bird that gets too close, “Get away, you!” Later, when Skeets asks him to come to the office, he warns her, “Okay, but no swans!” So funny! Was that in the original script? Because who knew those swans would affect him so badly during the shoot?

There’s a pointless military subplot: Bob wants to be back in active duty (because wanting war was the manly thing in 1955!) but Gretchen uses her influence to keep him at school. This subplot has only one up-side – it spawns the best gag in the film: Wilbur impersonating old bat Gretchen on the phone (“We must get together again real soon for a rousing game of mahjong!”), to get Bob back in service. But why would Bob want to leave when Nancy is here?!

Director Norman Taurog’s fifth Martin and Lewis film, YOU’RE NEVER TOO YOUNG is screenplayed by a young Sidney Sheldon, and even that great novelist can’t write what Jerry Lewis can do. Only Jerry could understand how to construct the actual Martin and Lewis physical and verbal gags, which separated these comedy megastars from others of their ilk, and it was he who wrote those parts for all their films, which he was never credited for. Here, we have the barbershop scene, the wife-and-barber scene, the ticket-buying scene, the instructional-kissing scene, the cigar-eating scene, the conducting-the-choir scene, a talking-over-each-other scene, to name a few.

For our reassurance (or maybe denial), there is no evidence in this film of the recent falling out of Dean and Jerry during 3 RING CIRCUS. Though there are reports of a palpable iciness between them, onscreen they are most definitely a team. Dean was of the mind that “the kid” was good for business, so performed his job judiciously, while Jerry, the more emotional of the two, felt insincere to be playing opposite a partner who didn’t care on an emotional level. After their suffering through 3 RING CIRCUS, life seemed back to normal, as the team were booked on gigs ranging from TV specials to club dates, and then the filming of YOU’RE NEVER TOO YOUNG. The only wrench thrown into what might have seemed a leveling out of animosities was Dean missing the premiere of this film – a lavish affair in the Catskills; his absence was pointedly an insult to Jerry, who never did fully recover.

As their partnership was winding towards an inevitable conclusion (Dean was now 38, Jerry, 29), YOU’RE NEVER TOO YOUNG gave us hope that there was a renewed life in the old codgers yet.

SONGS (by Arthur Schwartz, Sammy Cahn)
• I Know Your Mother Loves You (Dean)
• Love Is All That Matters (Dean)
• Every Day Is a Happy Day (Dean)
• Simpatico (Dean)
• I Like To Hike (Dean)
• Relax-Ay-Voo (Dean, Jerry, Line Renaud)