Assassins of a rich family find that one of their intended victims is conveniently a “survivalist” who can kick their assasses.

You know how those Fosters beer commercials make Australians look really tough? Or in the Aussie vernacular: “mike Aussies look rooly as tough as”? Turns out they’re true! 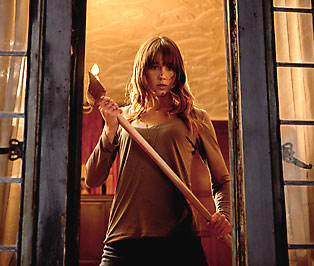 The push-up bra works wonders for your killing posture.

In the stereotypical slasher-porn flick YOU’RE NEXT, Aussie chick Sharni Vinson (STEP UP 3D) is Erin, girlfriend of Crispian (AJ Bowen), whose rich parents have invited the whole family to a retirement party out the back of Woop-Woop (aka a secluded house in the woods). And people start dying almost immediately.

Characters don’t disappoint when they do all the usual stupid things to meet their usual stupid ends, with the one “original” element being the Australian badass chick that fights back, or in the Aussie vernacular: “Tell me the Aussie sheila doesn’t half foyt back!”

She must drink Fosters Australian For Beer.

Amidst a cast of Americans all playing bros and hos (Nicholas Tucci, Wendy Glenn, Joe Swanberg, Margaret Laney, Ti West, Amy Seimetz, Rob Moran, Barbara Crampton), each a worse actor than the next, Vinson (channeling Rashida Jones) shines as the least worst actor and most dynamic presence. Her washboard abs and beauteous arse only help. In gory sequences that allow her to use surprise, ingenuity and indomitable will instead of brute strength, Erin mutilates the intruders one by one. Seems she “grew up on a survivalist compound.” Fair dinkum?

We find out quite early it’s all about the inheritance, so all this senseless killing makes sense, so to speak. Yet I can’t see the sense in the movie’s opening killings. Firstly, it’s the usual sex = death sequence: couple has sex, then gets killed (you mean we’re still buying that bullshit from the repressed ’50s?). We later find out these are the neighbors, who don’t really need to be “terrorized,” just gotten out of the way tactically. Why then bother scrawling, “YOU’RE NEXT” on their wall? Matter of fact, why bother scrawling “YOU’RE NEXT” on anybody’s wall? Get the job done, get the hell outa there and get the money. (Must admit, the killers are true grammarians: they never leave out the apostrophe every time they scrawl “YOU’RE NEXT” in blood on a wall. And most people these days wouldn’t even know there’s an apostrophe in it. Maybe that’s why they’re such bad assassins – they’re nerds, not killers.) We are so used to seeing the trope of the fanatical killer being shot or stabbed and not feeling a thing, so it’s laughable and a little disturbing every time these galahs step on a nail or get a meat cleaver in the arm and scream like sheilas.

Writing and direction (by Simon Barrett and Adam Wingard) is almost as bad as the acting. We get people running outside when they should stay inside, slowly examining rooms in the dark; we get nails through shoes, arrows through heads, a guy stabbed with numerous screwdrivers, all left sticking out of him, a guy killed with a blender to the head, a girl killed with an axe to the eye… and not a Steadicam in sight. Because, we presume, constant camera-shake makes a dull story more interesting.

Throw another snag on the barbie and let’s nick off.