A dweeb by any other name…

In YOUTH IN REVOLT, ill-defined characters populate a trailer trash landscape, with dialogue trying way too hard to be JUNO. 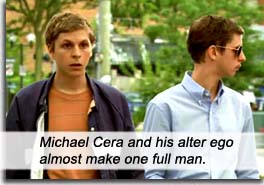 Even Michael Cera is sick of how dweeby he is. He’s willowy Nick Twisp, who invents an alter-ego to be able to find the audacity to break his virginity with the girl of his dreams, Sheeni (Portia Doubleday). He calls his alter-ego Francois Dillinger, and Cera plays Francois as another character alongside his dweeb Nick, with a pencil mustache and smoking cigarettes with French faux-cool. But this supposedly anarchic muse was not as interesting as the trailers made him out to be.

Nick arcs from being bland, to the realization that The Prick Gets The Girl, to inventing Francois for the express purpose of being a prick – and then allows Francois to become as bland as Michael Cera.

And I thought Jon Heder was a one-note Napoleon. Cera out-one-notes Heder with a character that has plagued us since SUPERBAD. His dual role allows him to stretch about as far as the pinkie he uses to smoke like a European; in such small doses, Francois matters almost not at all.

Thoughtless storyline has Nick getting Sheeni expelled from college by asking another girl to dope her with sleeping pills during classes, so that she would move back to town near him. He succeeds. And when Sheeni discovers his nefarious deed, yet she accepts him unto her teen vagina! Because the script says so.

You lost me at stalker.

I tried to be charitable; asked myself, Were I a teen virgin, would this movie affect me differently? Struggled with that question until my devil cucumber alter-ego set me straight: “This movie is shit!” Oh, alter ego, you’re always so adorably right.