You see, it’s trying to sell us “romance” via e-mail. And the very nature of electronic mail – digitization, depersonalization – removes the elements that romance is built upon. Writer-director Nora Ephron has taken an old story (Ernst Lubitsch’s THE SHOP AROUND THE CORNER 1940, where a couple communicated via handwritten letters, from a Miklós László play called Parfumerie) and attempts a modern updating. And it works about as well as “rocking out” christmas songs. In other words, it makes us feel dirty. 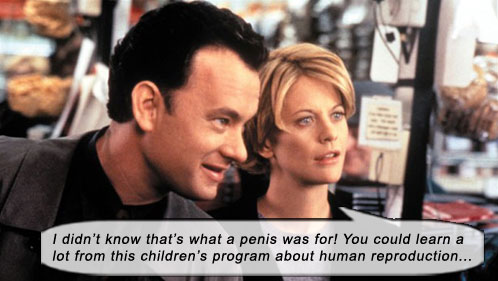 In YOU’VE GOT MAIL, two grown people court each other via e-mail, the man duping the woman into falling for him, due to him knowing her identity in real life, but she being unaware of his real life identity, his duplicitous modus operandi being to use his real life persona to cultivate her in the direction of his e-mail persona. America’s Sweethearts, Tom Hanks and Meg Ryan, reunite in this witless romantic comedy (their previous witless romantic comedies: JOE VERSUS THE VOLCANO, SLEEPLESS IN SEATTLE) and take another giant leap towards becoming America’s Retards.

Hanks is corporate cool, playing powerful businessman Joe Fox, who opens a mega-chain bookstore right around the corner from a hole-in-the-wall indie bookstore owned by Kathleen Kelly (Ryan, once again trying overhard to be fastidiously cute, and since she’s not a 23-year-old with 36Ds – failing), causing her store to go bankrupt, which makes her despise him. He, in turn, just wants to spam her Inbox. Oh, okay, you could say that he sees in her a return to the wonder of reading before it became a business model and blah blah, but who are we kidding? Are we 12 years old?

When Joe and Kelly meet in an aol chat room, he somehow discovers she is the chick in the shop around the corner with the Inbox that needs filling – but she remains clueless that her knight in shining HTML is her business rival.

Duplicity ensues. Joe smooth-tongues his way into Kelly’s good graces – even though they are still business rivals – taking her out on talk-dates, with the eminently compelling conversation (you know I’m being sarcastic, right?) always turning to her e-mail romancer. He nudges her to a deep understanding of the frailties of this mysterious stranger – but again, we all know he’s just nudging her towards the Personal Folder in his pants.

And isn’t she – a good-looking woman – not the least bit suspicious of a virile, heterosexual male taking her out so much and NOT trying to view her Contents? Is she so incognizant that she still harbors the prepubescent girly notion of Just Friends? Shouldn’t her small brain at some point ponder on what every father on Earth has asked every teen wolf, “What are your intentions, young man?” We, on the other hand, know Joe’s intentions – he’s warming up that chocolate starfish, so that when it’s dilated fully he can slide in ripe without any lube – yet the film desperately tries to shove that purely honorable evolutionary intent under the carpet. What, may I ask, do the filmmakers think Joe’s intent is? Walk his fingers down her Index? Roughly remove her Dust Jacket? Or – is he actually fixin’ to marry this broad with whom he began a relationship through duplicity?… A fine message for all the potential stalkers out there who don’t how to begin courting the girl of their fevered fantasies.

Greg Kinnear in a vapid role as Kelly’s initial boyfriend; Parker Posey in a shrikey role as Joe’s initial girlfriend. I like both these actors, given wretched roles here purely to show the lead characters making a journey from a dull relationship to a romantic chocolate starfish.

The only reason you need to send e-mail to a woman is for work-related documentation, or specific directions to cut out her incessant, inane yammering and unnecessary foreplay: “I’m going to be there at 11pm, so leave the door unlocked and be ass-up naked on the dining room table. Put on the dog-collar, wear the latex hood and don’t talk.” (How did my e-mail from last week get in here? Damn you, NSA!)

Long after the movie has overrun its welcome, Joe must reveal himself to Kelly as the man behind the e-mail (otherwise he’d never get to toss that salad, unless he wanted to resort to rape, or latex hoods). When Kelly discovers it has been Joe all along that was sniffing her out behind her back right under her nose, deceiving her and leading her on deceptively like a cow with a ring through her nose, her last line, as tears edge her eyes and her chocolate starfish dilates, readying for insertion, is, “I wanted it to be you.” Oh, so women really are stupid! And as they lick each other’s typeface, I was so nauseous that I cried real tears (and women around me thought I was an incurable romantic and I got a few numbers and tossed a few salads, so it all worked out).

I’m sorry to have to inform you that your message could not be delivered to one or more recipients. Undeliverable Mail Returned to Sender.