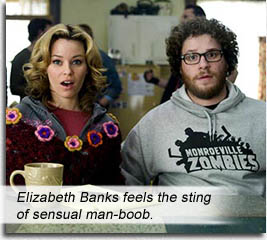 Before you think I’m going soft in both heads, I admit there is also much brainlessness in ZACK AND MIRI, foremost being the issue of whether heterosexual men and women can be Just Friends – as if that was an issue. The simple answer – actually, the only answer – is ‘no.’ And I sincerely thank writer-director Kevin Smith for stating unequivocally with this film what all men know and all women deny: that between a heterosexual single man and heterosexual single woman (who are in each other’s Pumping Paradigm), there is no such thing as Just Friends.

In freezing Pittsburgh, roommates Zack (Seth Rogen) and Miri (Elizabeth Banks), friends since high school, are so far behind in their bills that their heat, electricity and water are all turned off.

Two Smith alumni (Jason Mewes and Jeff Anderson) get in on the action as randy actor and wisecracking DP (that’s Director of Photography, not the “other” DP). Surprising that we’re allowed to see actual pumping motions during the filming, Katie Morgan’s assets bouncing tubular in our faces.

The chemistry between the rambunctious Rogen and the beatific Banks is undeniable. We can feel their first-time-entry position in our loins; her glowing acceptance, his driving towards scalding release… In a later scene, as Katie Morgan steals away Zack for a quickie, the emotion that flows between Zack and Miri (as they look at each other sadly and move apart in slow motion) is palpable.

Suffice to say, the endgame was never about paying the rent; to overstate a point, it was about Zack and Miri discovering they liked fucking. Each other. (You know those yawns that are so hard your jawbones crack?) An “interesting” plot point might have been for them to discover they were bisexual, and get it on with Justin Long and Brandon Routh (playing gay guys so badly it’s funny).

Bravo to Kevin Smith for rejecting the chimera of Just Friends, for waking us all to our inner filth, for giving us more Seth Rogen improv to marvel at, for screwing raw and scat humor and showing us Katie Morgan’s naked ta-tas – and disguising it all as romantic comedy.