Dumber Than a Speeding Bullet. 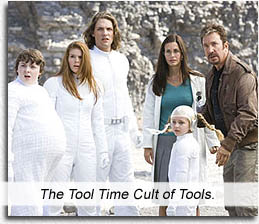 This movie made me weep with emotion. I had no idea a movie could be THIS FREAKIN’ BAD.

Tim Allen is retired superhero Zoom (think: The Flash as a doughy guy), called back into service by the secret government agency (aren’t they all?) that created him – not for his super services but as a consultant, to train a new generation of kid heroes.

Courteney Cox is the bespectacled hot chick scientist who is supposedly dorky and not hot because of the spectacles. Chevy Chase is head of the secret government superhero project and doing as inept a job as we would expect him to be doing. That’s not a gag when we’re referring to his non-existent comedic timing as well.

Zoom’s brother (Kevin Zegers), a guy who was originally a part of the super team and went rogue, is on his way back from some other dimension to do Bad Things because he’s Bad. And Zoom’s new uncooperative team of spoiled brats must be whipped into shape in time to stop him. Zoom rediscovers his superspeed in the process and there is much Disney rejoicing that makes us embarrassed to be alive.

Appeals to the teen-and-below market who don’t realize this story of self-realization has been told a million times, a billion times better.

Cry Chevy and let slip the dogs of bore.