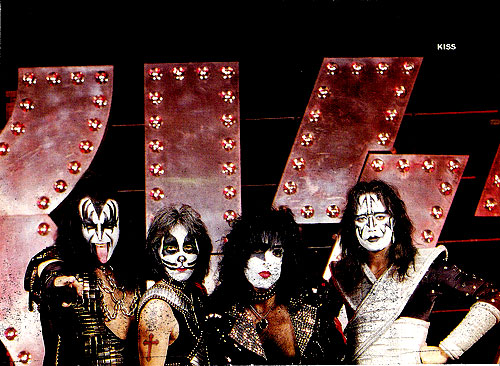 ust it all be said again for the next generation? This time round, leaving out all the goofy, irrelevant stuff like Paul’s favorite color and Ace’s favorite dessert…

Let’s focus on the last of those distinctions – Kiss are, after all, just a band, right?

Kiss have unwittingly explored every facet of humanity’s character in the last twenty-something years. From “following dreams” to “unleashing the persona within”; from enticing the hordes to offending the multitudes; from gaining the freedom that comes with power, to being asphyxiated in a web of their own making; knowing poverty and exploiting wealth; being wild and crazy guys, yet touted as one of the most professional touring shows, being leaders and being unoriginal; living in sin and living clean; creating music and destroying musicality; being doggedly visceral and subliminally cerebral…

For this band, it was never “only” anything. It was all “sacred”; all a part of The Grand Plan. Kiss (admittedly with the aid of their canny management team) did not become worshiped by accident; each high-heeled step was taken to gear themselves to be worshiped. And that is what separated these boys from the men they rose up amidst in the early 70s. But you, 1996 rock reader, do not need a stroll through Kisstory. Buy the book.

What of this show? How do Kiss measure up in 1996 (and, more darkly, how does 1996 measure up to Kiss)? For all their otherworldly élan, the bottom line would be drawn at this stadium, onstage in harsh reality, as it would be drawn every night they stride up to those mics.

Though they have endured two decades, there is still no sign that Kiss have been forced to clock-on and drudgerously go about their moneymaking profession. Oh, they are a tad older and wiser, which mayhaps contributes to the step being slightly less sprightly – but Kiss deliver. With a vengeance. As always. As promised.

Though overexposed nearly to extinction during their 70s reign of pioneering, saturation “merchandising,” still many sober rock and roll tomes wrongly identify the Kiss band members, so – purely for the edification of the younger set – here be the current Kiss contingent:

For those who have spent the last year on a distant planet, yes, it is The Original Lineup. On Ye Grande World Tour, no less! The lineup that had to endure all those silly questions about favorite foods and preferred pets and worst dining experiences. The lineup whose original answers this generationext thankfully missed. Which is why we’ll probably learn all over again about Gene’s photo album and Ace’s Porsches. Fast women and fast cars. 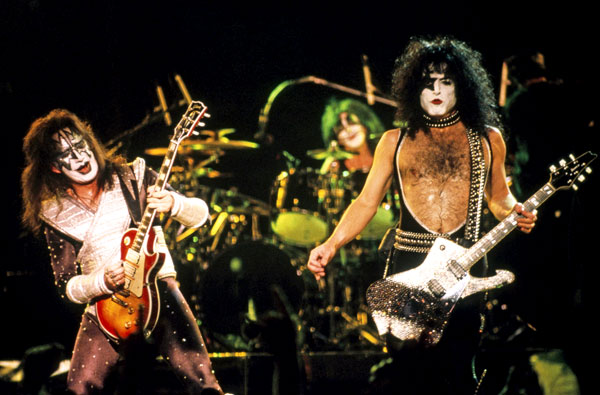 At least all those musically-uneducated youngsters (who believe that heavy music is reliant on speed and shirtless stage-diving) will learn of the bone-crushing heaviness of Watching You, Cold Gin and Shock Me, delivered as “heavy” due to the manner of composition. And though the Kiss set also comprises comparatively smoother ear-candy – Rock And Roll All Night, Back In The New York Groove – the flesh-tearers like Let Me Go Rock And Roll and Black Diamond verify Simmons’ insistent claims: that Kiss were one of the first really “heavy” bands. We don’t even need to speak of God Of Thunder…

I ponder on the predicament faced not by the teenage Green Day muttonheads, but by those toddlers brought to the Kiss show by their were-kisser parents. Being indoctrinated with the Kiss experience, how are these children ever to appreciate a live band again when they eventually make their own rebellious treks out to rock gigs in ten years, with this vestigial memory of unremitting spectacle forever burned into their back lobes?

It is easy to dismiss this “comeback” as once-warriors jumping the 70s-retro bandwagon; many critics and reviewers have had a hefty old time trying to a) figure out WHY – then upon learning of the staggering sums of money involved, have b) tried to gauge exactly how much Simmons and Stanley stand to walk away with, then c) pan them for doing it for the money, whilst derogating them for resting on laurels, and, in a final stagey attempt at attaching their ephemeral voices to a long-standing legacy, have tried to d) compare Kiss to current bands and trends in a moot display of musicology and asinine academia.

But (and I rein in the bias with white knuckles – yes, I admit to dressing as Gene back in 1985 for a costume party at which my band performed) this new old incarnation of Kiss displays no lack of energy, no lack of vocal power, no lack of excitement and intense audience involvement, no lack of musical prowess (and though I could insert a tag about the minute amount of “prowess” it would take to pull off these pre-80s songs, most of the Kiss catalogue is no more or less challenging to perform than any other rock classics from the same era – one might as well attack the Rolling Stones for their simplicity); there is virtually nothing which one could pinpoint to derogate this act one iota…

…Well, maybe one iota… Ace Frehley, who is actually a much better guitarist than the confines of this show will allow him to be; whose guitarwork soared after leaving the Kiss camp in the 80s (as witnessed on his solo albums), was denied the freedom to strut that musical growth, having to perform solos that were composed by him almost twenty years ago! And his solo instrumental, for the sake of tradition, was also rooted in 70s-Ville – all those licks ripped from Chuck Berry and Hendrix and made his own – complete with smoking and flying guitars (old tricks to be sure, but that voracious nostalgia bug eating it all up).

But if I chide Kiss for stultifying Frehley, commendations must go out to Stanley and Simmons for digging Peter Criss out from under the rock he has been residing under these past seventeen years. His trivial attempts at post-Kiss projects very decisively falling through only heightens the fact that the poor guy has, unfortunately, lost it completely. And one can only speculate at the level of patience the Lover and Demon have had to exercise in playing with Criss again after being spoiled by the prowess of one late Eric Carr and one recent Eric Singer. One might contend, “Who the hell am I to critique someone who can buy more cars in one month than I will own in a lifetime?” Yet all I am commenting on is this finished product – that which is put on display to the public to find legs of its own. This 1996 gig. And I am floating on Paul Stanley’s promise that this would be THE Comeback to end all Comebacks. Yet the Kiss-less years have caught up with poor Peter, whose jazz influences and vaunted cat-like prowess are nowhere to be seen. And if he keeps speeding and slowing and making mistakes which cause the band to start songs over (ouch!), he may shortly be taking one for the team and feeling Gene’s dragon boot in his pussy behind.

Enough griping. There are not enough superlatives to describe the underrated Paul Stanley. He rocks, he rolls, he leaps, he pouts, he shakes, he bakes – he fucken cooks with gas. The true essence of the rocker sex symbol. Though Gillan, Plant and Daltrey may be archetypes of the 70s rock vocalist, the only reason Stanley is not perceived as their equal is because he and his band did such a good job of diverting attention away from their individual talents with the circus that is Kiss. Stanley’s niche is unchallengeable, as someone who can do all those specialist-vocalist tricks with the voicebox and play guitar and compose, to say nothing about his longevity. Hopefully, after all the hype about his onstage persona has calmed, he will one day be recognized as the super-vocalist and power-pop songwriter he truly is.

And then there is – Gene Simmons. Is there a man between twenty-five and thirty-five who has not been affected in some way by this self-proclaimed God Of Thunder?; this self-professed Doctor of Love; the self-possessed Man of a Thousand Faces? Was Simmons ever “only” a bass guitarist? He’ll be the first to admit it was never about the bass guitar. Or about music per se. It is about stardom. Super stardom. Simmons IS the face of Kiss, the undisputed public identity of the band, its co-spokesman, co-writer and co-conceptualist. He is the Beast, the Lover, the Brains and Brawn rolled into the archetypal self-made, rock-god millionaire. Are there words in the human vernacular to describe the heights of respect I lavish on this man? I don’t think so! Gene! See me, feel me, touch me, heal me!… (Time for that cold shower, I think.)

In this modern media age, the younger generation have forgotten what it was like for a band to create excitement simply through the charisma of its members. Kiss were designed to meet the needs of the graven image-worshippers. The 90s false heroes who depend on the anamorphic lenses of MTV and the cash-push promotion of their record companies to generate their shallow fan base look more and more like massive fecal blobs when compared with the Real Thing.

For the generation who have no idea that rock and roll was once a vehicle for enjoyment rather than angst; who believe that Marilyn Manson is the first “outrageous” rock star; who are wholly unaware that every modern riff they swear by came from the frets of Frehley and his ilk (Blackmore, Page, Beck, Clapton, Berry, et al), Kiss has risen again to punctuate these truisms.

Must we endure all that goofy, irrelevant stuff again, for the edification of the generational gapsters? For Kiss at least, the answer is a resounding YES. (And don’t you dare leave out Paul’s favorite color and Ace’s favorite dessert…)