In the tiresome ACCEPTED, Justin Long is Bartleby Gaines, rejected from a series of reputable colleges. To appease his parents, he forges an acceptance letter to a fake college, and then finds he must create an actual campus to follow through with his ruse. So is born the South Harmon Institute of Technology (the sophomoric acronym S.H.I.T. used with ubiquitous abandon and little effect). 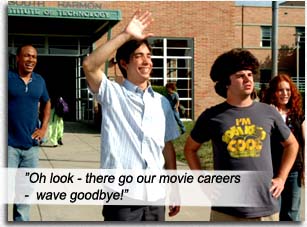 Slackers from around the state attend and the “college courses” (Math-turbation, Men Are Weak, Exploding Things with your Mind, Watching Bikini Girls, etc.) are actually accredited by movie’s end
through the methodology of Inspiring Movie Speeches Accompanied by Music Swells (be still my SCENT OF A WOMAN).

Writers Adam Cooper, Bill Collage and Mark Perez, and director Steve Pink ask us to accept too much without so much as a giggle in return. Photoshopping letters of acceptance is one thing; designing a website that would pass scrutiny for parents about to shell out $10,000 for semester fees is quite the stretch.

That’s just the film’s first obstacle. Which it hurdles by making the parents desperate enough to pay a college whom they can’t even contact through its website. (Parents are dumber than their kids, right? Fuggedaboudit!)

The implausibilities multiply like lemmings: Bartleby and four friends transform a derelict mental hospital into a college campus that – once again – fools the parents (whom by this point we know must be mildly autistic); a wacko acquaintance installed as ersatz dean (Lewis Black – the only funny thing within ten miles of this garbage); local council and authorities are completely incurious as to the hospital being reconditioned; electricity, water and maintenance concerns don’t exist in this universe…

At nearby Harmon College, the movie continues the grand American tradition of disparaging “real” education: students struggling to keep their eyes open, playing video games, or unknowingly turning into corporate monkeys due to being educated the “conventional” way. In other words – there is NO WAY for an American Idiot to be educated. This is the message of ACCEPTED. And we wonder why the rest of the world laughs at America.

The movie espouses some valid points, but since the resident Madman (Lewis Black) makes these points, they are lunatic ravings. The education system in America IS an Agrarian Age system, more interested in leaching the inquisitive mind of the desire for knowledge and pimping students unto society as peons for the workforce than it is in “educating” individuals. But the dropouts and losers who populate the fake South Harmon college are not there for real “education” either. They are goofing off in lieu of learning and seeking diplomas for it. Like those commercials advertising you don’t have to break a sweat to get great abs with their lazy machine – but if you don’t break a sweat, you’ll NEVER have great abs, with or without their useless machine. Arguing that leaving the dropouts to their devices will produce the scientists and scholars of tomorrow is demonstrably asinine.

But enough impassioned movie speechifying and inspirational music and you can achieve anything, kids!

Justin Long has established a flollopy niche for himself (although his attempts at slapstick are entirely unnecessary) and he carries the movie well as a jumpy leading man, but not through any overt talent or charisma; rather because his supporting cast display such a lack of charisma (Jonah Hill, Adam Herchman, Columbus Short, Maria Thayer), it seems they’re only appearing in ACCEPTED because, like their characters, they were rejected from everything else they auditioned for…