hen Batman stayed his hand against Superman in BATMAN V SUPERMAN: DAWN OF JUSTICE due to Superman uttering the name “Martha,” why did everyone freak the fuck out about that plot point? WHY DID EVERYONE FREAK OUT?!

I can’t believe how comicbook aficionados did not see the real reason “Save Martha” stopped Batman. You all just joined the civilians in jeering Bruce’s little bat-tantrum. Frankly, shame on you! You, who give passes to powers without reason, flying without physics, and magic who cares fuck you. Really, how can you ever appear on another video with all your dolls in the background proclaiming your bona fides as comicbook authorities?

Sure, the fight could have been handled more sensibly, like maybe Superman could’ve tried telling Batman, “Y’know, Lex Luthor has taken my mother hostage, to make me fight you” – but then, Batman had his own paranoia on full volume at the time, so he probably wouldn’t have heard Superman anyway, whom he called “the alien” at that point.

And Superman could’ve lasered Batman’s philtrum at any time (poetic justice?) but then, Superman never really wanted to kill Batman, or even fight him, just restrain him, like a loopy girlfriend – until they could both go look for his mother. But Batman didn’t know this: so how bat-hubristic of him to wear a Kryptonian-proof suit – and then have an open-mouth cowl for branding purposes, thinking Superman wouldn’t just fry his head through the gap – ? Like Iron Man never thinking to just shoot Captain America in his supple thighs.

As everyone is quick to point out, the reason they stop fighting seems weak at first blush. Batman, with his various kryptonite tchotchkes, has brought Superman down, and is about to spear him through the head with a krypto-spear when Superman – with his dying breath, begs “Don’t let him kill Martha!” Now, instead of playing the pronoun game, Superman could’ve made it easier and said, “Don’t let LUTHOR kill MARTHA KENT!” But – ask yourself – why was the word “Martha” enough? To be clear, Superman did not know it was going to be enough. It happened to be enough – because The Bat is PTSD. 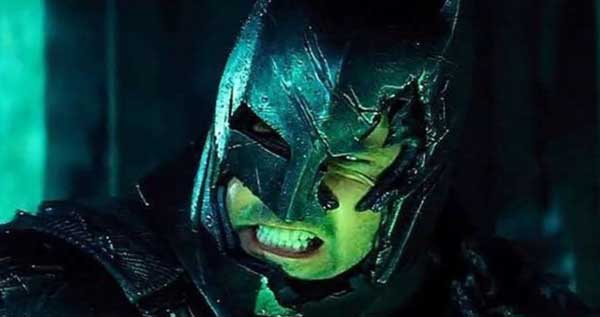 When Batman howls: “Why did you say that name?!” Lois Lane is there to reveal it is Clark’s mother’s name. His MOTHER. That’s the key. That’s the firewall Bruce couldn’t breach. It means: this “alien” has family.It means he has human ties. And human empathy. It’s exactly the opposite of what Bruce Wayne thought of Superman. Bruce attacked because he believed this super man lacked humanity; that the coldness of this alien’s heart might cause him to destroy Earth without even the barest moral twinge, not through malignancy, but because he was incapable of feeling at all. Hearing that Superman cared for someone else stayed Batman’s hand. This alien could discern; this being had a moral compass, this man was HUMAN after all. With this revelation, Batman’s reason to kill Superman was negated.

Director Zack Snyder and the writers, Chris Terrio and David S. Goyer, placed signposts all along the way in these DCEU films, to highlight how important both of these heroes’ parents are to their ethos and purpose, especially their mothers. I mean, in other Superman media, once he leaves Smallville, we never see his parents again – but here, Clark continually visits his mother, and they didn’t need to show us the death of Bruce Wayne’s parents yet again, and do so possibly for the sole reason of having Thomas Wayne mutter “Martha” with his dying breath… if only to emphasize this payoff, where another man mutters “Martha” with his dying breath. That name, at that moment, was enough to give The Bat pause, and to then immediately discover it was Clark’s mother, would profoundly affect this man whose own mother was such a driving force in his origin. It’s an example of brilliant writing, rather than lazy writing, as the internet knobs have duped everyone into believing.

Bruce would admit in 2017’s JUSTICE LEAGUE about Superman, “He’s more human than I am.” That line – which brings closure to Bruce’s arc – is omitted in ZACK SNYDER’S JUSTICE LEAGUE (2021), probably because Zack is taking you all as intelligent enough to comprehend that Bruce’s arc was completed in BATMAN V SUPERMAN with Bruce – actually – saving – Martha.

One would think the viewers best suited to understand Batman’s reversal would be you Batman fans, you DC purists, you superhero apologists, who understand how driven/damaged a soul must be to DRESS AS A BAT to combat crime; the fans who would comprehend how something as seemingly insignificant as his mother’s name would adversely affect the psyche of a boy who saw his mother gunned down in front of him. Nope. Even you joined in on the mocking laughter and stupid comments and elitist derision, at this scene which is essentially THE arc of redemption for your hero. Stand up straight, bat-fans! This is our moment! Don’t be afraid to give this pivotal scene the respect it deserves! 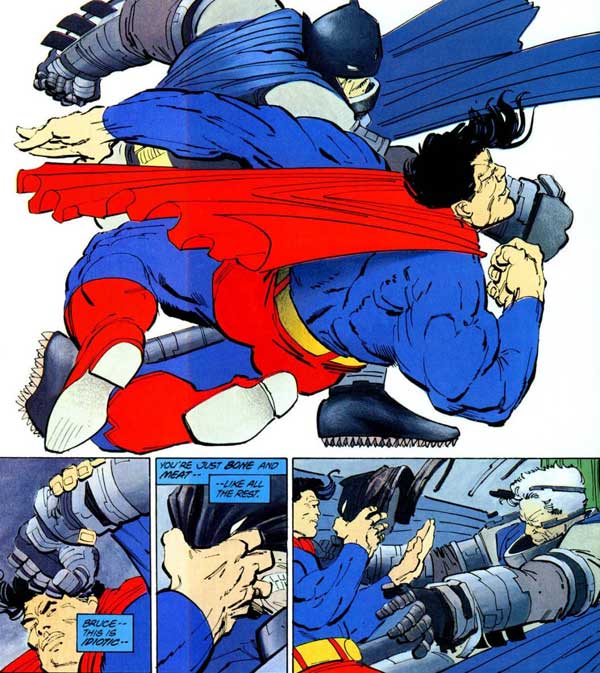 This iconic scene of Batman versus Superman is lifted from Frank Miller’s watershed graphic novel The Dark Knight Returns, but only the visuals were lifted – mainly the augmented Batsuit and the punchaboo; the storyline in the comic was much more layered. Just like Marvel did with THE WOLVERINE (2013): lifted the characters from a great story, but not the actual great story. (Frank Miller was also involved with that comic, as illustrator only.)

The battle in Dark Knight Returns ends very differently, and even though Batman gabbed about both their parents during that brawl, it wasn’t the thematic grist driving that fight. Terrio and Goyer crafted an altogether different compelling storyline for the film; the “Martha moment” should be considered a grand Freudian payoff to an epic character study more intricately based in psychoanalysis than any superhero movie needs to be. It will take years for this to sink through the dull thud of the internet trolls who started this make-fun-of-martha narrative and the unwitting unwashed who followed those uninformed uneducated trolls blindly just to feel like they’re running with the kewl kids…

… So now that Dunmore has set you straight, the next time you come across someone who mentions ‘Save Martha’ with that insufferable “I’m in on this worldwide gag” attitude, you grab them like you’re wearing an augmented batsuit, and you ask them quietly and politely, WHY DID YOU SAY THAT NAME?!

See this article on my YouTube channel, Dunmore’s Movie Mania. If you’re a Movie Maniac, consider SUBSCRIBING and supporting my channel as a PATREON member. And SHARE with all your super pals! Poffy Approves!