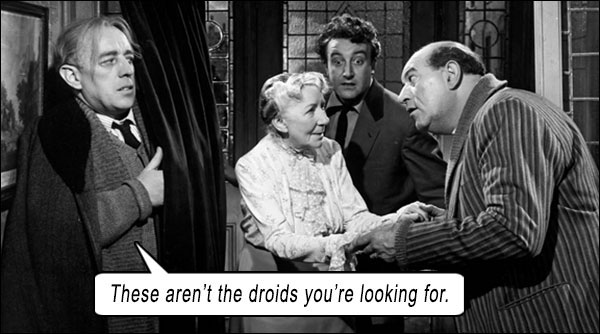 That Rare Occasion a Remake is Better Than The Original!

A group of low-rent thieves heist a bank truck with the unwitting aid of a little old lady, whose rooming house they use as a makeshift headquarters. When the old lady discovers their ruse, they decide to dispose of her – but who amongst them has the stones to actually do it?

I saw the 2004 remake of the heist comedy THE LADYKILLERS long before I saw this 1955 original. Marveling over Tom Hanks’s deliciously loquacious Southern Gentleman gang leader in the remake, I thought the original would feature an even better version of the character, played by no less than the great Alec Guinness.

Alas, I was wrong!

Guinness is Professor Marcus, sporting prosthetic buck teeth that lend an impish, ghoulish air to his scheming demeanor. But again, though he IS a thief, alas that whole makeup job was for nothing, as it is purely a visual shortcut to denote untrustworthiness. There is not much more to his character (except for being the “brains” of the heist troupe). It is unfortunate that the remake is so good, because it showed us how well this character could have been fleshed out. 50 years after this original, a similarly buck-toothed Tom Hanks (with writers-directors The Coen Brothers) would explode out of the box with the faux Professor’s verbosity and eccentric charm, which would be of a piece with his buck-toothed duplicity.

Professor Marcus rents a room with Mrs. Wilberforce (Katie Johnson), welcoming in his heist buddies under the guise of classical musicians, who all plot the heist in Marcus’s room, while pretending to “practice” via the cunning use of the best technology available – a record player.

One of Marcus’s co-conspirators is Peter Sellers as Harry, in one of his first movie roles, so enamored with his idol, Alec Guinness, that he was constantly insecure about whether he was doing a good job. And let’s face facts: this is not the Peter Sellers we know – the confident, versatile, domineering comedic talent; this is a young upstart trying to make his way in the filmic world and not doing anything remotely challenging or exciting to disturb his patrons.

Alongside Sellers, as the most obvious “hitman” character is Herbert Lom as Louis (who would go on to star opposite Sellers’ Inspector Clouseau, as his nemesis in THE PINK PANTHER films, starting with 1964’s A SHOT IN THE DARK). The other two crooks are not worth mentioning – a big lug and a big sap.

The heist goes off smoothly, but it is when Mrs. Wilberforce discovers the stolen money and her part in it that the movie enters into quickstep broad farce, with each of the thieves trying to find ways to: a) kill Mrs. Wilberforce, while b) stealing all the money for themselves, while c) not getting killed doing either.

Premiere voted THE LADYKILLERS one of “The 50 Greatest Comedies of All Time” in 2006. It was uproarious in its day, but it has dated considerably (just the low-tech elements of the heist itself might confuse modern viewers – police having to use public phones to communicate crimes in progress, picking up parcels without any identification, newspaper headlines taken as fact, etc.), and the thing most responsible for this movie being shown up as mediocre – ITS OWN REMAKE!