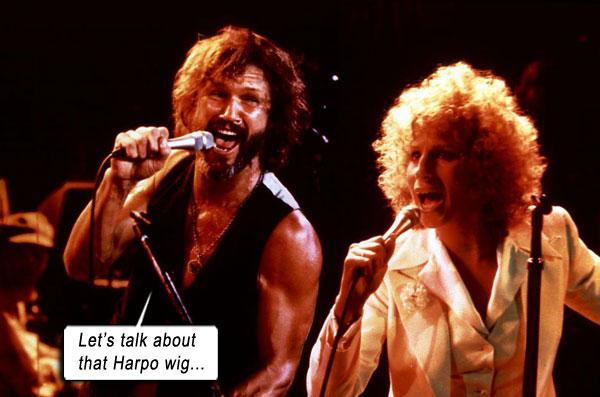 A Nose for Stardom.

An alcoholic rock star sees a nose singing in a small club. It’s attached to Barbra (Ms. Streisand if you’re nasty). He falls in love with the nose, brings it into his rock world and sees it rise to fame, whilst his own star is falling.

Another generation, another A STAR IS BORN…

It’s 22 years since the last version of this film, and gone is the Hollywood Studio premise from the ‘30s and ‘50s, gone is the naïveté of the female protagonist, gone is the innocence of those past decades – replaced with the hedonism and excess and women’s lib of the ‘70s.

Kris Kristofferson is the rock star John Norman Howard, all chiseled abs, Bigfoot beard, and drunk and drugged for the duration, who picks up Esther Hoffman (Barbra, white-fro and diva ‘tude) in a small bar after he comes off a big gig where he forgets the words to his own songs, straining like a bear taking a shit in the woods, and staying in key like a karaoke doofus.

Enamored with Esther’s powerful voice (and apparently lusting after that magnanimous honk), John hooks up with the boisterous nose, and brings her onstage at his own gigs regularly, to showcase her original songs, until his own manager signs her to a record deal, whereupon she goes on to win a Grammy for Best New Proboscis. John crashes the ceremony with Bigfoot beard on high insult. His career has stagnated due to drugging and drinking himself into all sorts of wacky accidents and incidents. Gary Busey as his right hand man and coke wrangler isn’t helping. (FUN FACT: At the beginning of the movie Busey wears a Willie Nelson shirt. Willie’s son Lukas would appear and co-write songs in the next version of A STAR IS BORN.)

Following the beats of its predecessors, the story finds a cleaned-up John learning of Esther’s plan to put her career on hold to coddle him, and, not wanting to hold her back, elegantly offs himself in a candy apple red sportster convertible, while Esther’s album blares on the 8-track. (This car has ALL the mod cons!) 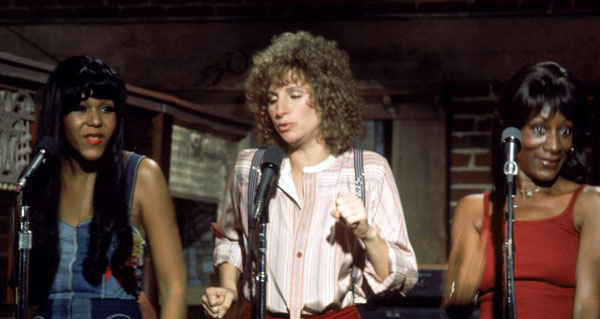 When I think rock and roll, I think Barbra.

Written by John Gregory Dunne and Joan Didion (both writers on THE PANIC IN NEEDLE PARK) and directed/co-written by Frank Pierson (writer on COOL HAND LUKE and DOG DAY AFTERNOON), A STAR IS BORN is action-packed, disjointed, street-cred (well, for the ‘70s) and uninvolving, with characters we feel no sympathy towards. Esther is bold, rash, proactive, not shy or awkward, with no character arc – she starts as a confident and powerful singer-songwriter and ends as such; she just fell into the pathway to fame due to hooking up with a star. And John (whom Esther calls “JohnNorman” like it’s one word, to keep a sense of continuity with the previous films’ Norman character) is a rancid, hairy, untalented, bipolar, cheating drunk. He gives Esther her break unintentionally, because – let’s face it – in return for giving Esther exposure on giant stages he was smashing that honk, and never intimated anything more – it is his manager that sees the business potential in Esther as a solo artist and moves on it.

And Esther is liberated to the point of being irritating. We can’t really tell who asks who to get married because her take on it is: “I never thought I’d get married again – you’d be lucky to have me!” Oh well, ex-CUSE me! And she righteously tells off JohnNorman: “You can trash your life but you’re not going to trash mine!” All these elements work against the credibility and poignancy of JohnNorman’s final act of supposed love-suicide.

Nonetheless, STAR was the second-highest grossing movie of 1976 (behind ROCKY –because his nose was bigger), winning 1 Academy Award and 5 Golden Globes. Its two leads were highly visible and marketable cross-media stars, both Kris and Barbra equally involved in movies and music.

KRIS, the real life country singer, here performing in a style barely recognizable as rock, released his 7th solo album (Surreal Thing) in July of that year (Gary Busey did some backing vocals!). He was current, vital and in-demand as a songwriter for various artists, and his then-fledgling movie career already contained a few leading man roles (ALICE DOESN’T LIVE HERE ANY MORE). Always a barely-in-tune gruff growler, he was never a great vocalist per se, but here, his voice is shot to pieces, with bad technique and just plain flat notes and dull phrasing. Was this intentional, and meant to signify he didn’t give a fuck anymore?

BARBRA, also an established vocalist, released her 18th album (Classical Barbra) in February that year, coming off major movie roles (THE WAY WE WERE, 1973; FUNNY LADY, 1975). She was hot property. And knew it. Even back in the mid-70s, the anecdotes of Barbra being a pain in de ass were rife, both Kris and director Pierson saying they never wanted to work with her again. It can be construed that this movie devolves to being an infomercial for her music career. Like Judy Garland promoting her comeback in the 1954 version, Barbra gets to go apeshit onstage. I mean, two whole songs back to back, Barbra? And complete versions of her other onscreen songs, unlike Kris, who only gets to grumble a few lyrics here and there before he loses interest. And Barbra’s single Evergreen is played three times! It would go on to become her biggest hit. 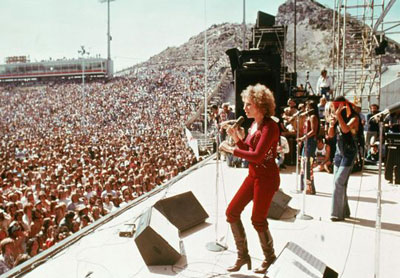 “Hello, Arizona! Are you ready for the chicken dance?!”

The outdoor concert where John drags Esther onstage was a real life rock concert at Sun Devil Stadium in Arizona, with Peter Frampton headlining in front of a crowd of 47.000 fans (Acts included Sammy Hagar’s Montrose, Santana, and Kristofferson and Streisand!) Adding to the magnitude of this event, STAR is the first feature film to use Dolby Surround Sound.

There is a lack of chemistry between the stars, even though we see them wrestle in mud, touch tips, and record together. We may understand JohnNorman’s stand-offishness (being a philandering rock star), but we cannot feel displays of Esther’s love – it’s due to either Barbra’s one frozen solid facial expression, or Kris’s gruffly-bearded Bigfoot face, from which he can’t seem to struggle out from behind.

Before his final drunken ride to glory, JohnNorman touches Esther’s nose while she sleeps, as Bradley Cooper would do in the 2018 version of the film, making Lady Gaga’s nose a cute and funny focal point. However, this touch is the one and only time Barbra’s nose is highlighted, even though it is twenty times the honker of Gaga’s. (Its only positive quality being that it distracts from her crossed eyes.)

After JohnNorman’s death, Esther sings a heartfelt tribute song (kinda), but then launches into an upbeat disco inferno, complete with chicken dance, and loses the tone of somberness completely. It ends on this up-note, making it seem Esther is glad to be free of the burden of her high maintenance alcoholic husband. And maybe she is. Maybe this movie is, for the first time, showing us the women’s lib take of A STAR IS BORN.