They say tragedies happen in threes: In March 2022, Russia invades Ukraine, Taylor Hawkins dies, and Will Smith sullies his whole career and the 94th Academy Awards with one… little… slap.

ill Smith maintains that he slapped Chris Rock because he was “defending his wife’s honor.” From a comedian who was not attacking her honor. Merely joking about the movie GI JANE in relation to Jada’s bald head. Oh, but Jada has alopecia, which is hair-loss, narcissistically posting on every social media platform that she is “suffering” from this “medical condition” – and it didn’t matter whether Chris knew about it or not, because she’s also been telling anyone who’ll listen “I don’t give two craps what people feel about this bald head of mine, cos guess what? I love it”… So why does this hypocrite suddenly feel entitled to pretend offense? Which her husband acted on, pretending he was standing up for one thing, while really standing up for something much darker and humiliating.

First, let’s call alopecia what it really is – baldness. 85% of men and 50% of women will experience some form of alopecia in their lives. Welcome to the world, Jada. Alopecia is not a disability, so where do you get off calling it a “medical condition”? EVERYTHING the human body experiences is a medical condition [cough—eurh, I’ve got a cold — don’t make fun of my MEDICAL CONDITION…]

In a world where women want to be treated as equals, it’s time bald women learn to get made fun of just like us bald guys do.
— randuthayne (YouTube) 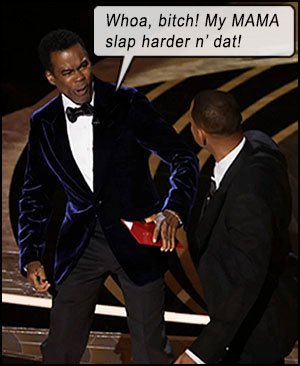 Many clueless witnesses applauded Will for “defending his wife’s honor” – Tiffany Haddish, whose comedy I love, said, “I seen a man stand up for his wife – which we don’t see that much anymore” (no, you saw assault and battery, not self-defense); Will Smith’s son, Jaden, tweeted: “That’s How We Do It” (just what we’d expect from a woke quim-fart like Jaden); and with every interview Denzel gives about the ‘devil coming for you at your highest moment’ bullshit, he is slowly edging himself onto the wrong side of history. Because a joke doesn’t rob you of honor – unless you let it. And really – Will Smith wasn’t defending his wife’s “HONOR” (?) – he was defending his wife’s VANITY. But let’s face it, he wasn’t “defending” anything – he was coerced by Jada into acting out his ideation of maleness on the threat of Jada acting out her denial of her femaleness.

And if Gemini Man was “standing up for his wife” what would his supporters think if Chris Rock’s brother, Tony, subsequently “stood up for his brother” and smacked the shit out of Will Smith? Would they still condone violence as a solution to being mildly offended?

The Reason That Will Smith Hopes We Forget

So — here’s the real reason why Will Smith is a coiled spring and had to act out being a man:
July 2020. Jada’s Red Table Talk, where she entraps/coerces Will into believing that HER affair with her son’s friend, rapper August Alsina, was WILL’s fault…

[SIDEBAR: “entanglement”] Watching this full interview is nauseating – for a man. Gentlemen, get your barf bags ready, and cover your groin. Jada is a ball-taker of the highest order, calm as stones, while Will is so embarrassed and humiliated, he’s on the verge of not being able to speak. So it’s an open marriage – no biggie, but BOTH parties must be open to that open-ness, and we clearly see that Will is being hounded into it by this snide cheating slut. He’s eating his heart out for her, while she doesn’t give a fuck about him. And the world saw this – the leading man hero Will Smith, pandering and placating and pussywhipped, choking back testosterone, while his wife TOLD HIM how it’s gonna be regarding her and August… We got eyes. THIS is what wound up Will Smith for years; THIS is why he snapped in public; THIS is why he had to prove he wasn’t the world’s biggest cuck! And by slapping Chris Rock, he simply proved he is. In the end, he was defending HIS honor – and he lost it all.

But here’s the worst part of this incident: I loved Will Smith as much as you did. From his breakout role in SIX DEGREES OF SEPARATION, we saw he was a craftsman and much more than just a doofus fresh prince. And all that world love… flushed down the toilet.

Tonight Chris got some fresh prints across his face, know what I’m saying.
— soulasylummeatpuppet (YouTube)

And Will DESERVES that Best Actor Oscar for his stunning portrayal of Richard Williams, the father of the greatest female duo of tennis players ever, in KING RICHARD. No one has ever doubted his talent… But upon assaulting and battering someone – he should have been arrested BEFORE he swaggered back to his seat, with that attitude of “Nailed it”! If you or I were to smack someone in public exactly like Will slapped Chris, how quickly would we be wrestled to the ground by venue security and held for the police? Yet the Academy officials and police allowed Will Smith to remain unmolested in that theatre, moving around freely to talk to other millionaires who are also protected from the lower class by the PO-lice, eventually accepting his Academy Award! This fact alone sends a horrifying message to Karens around the world that their imagined offenses are valid! 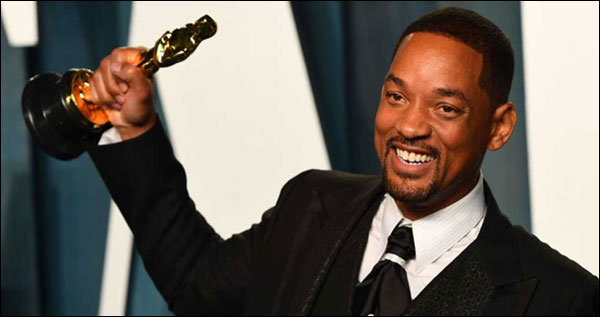 … and now Hollywood is keeping Will’s name OUT ITS FUCKEN MOUTH!

And the other equally horrifying message: Money Supersedes Evidence. When QuestLove won for Best Documentary just minutes after the slap – look who’s shaking Quest’s hand as if nothing happened? There is video evidence of the perp Will Smith committing assault and battery not 5 minutes ago, and here he is shaking another man’s hand, unarrested, unmolested – not even detained! A perfect example of how race has nothing to do with police brutality – it’s always been about class. The upper class and the lower class.

Did someone say class? The person who shoulda won the Oscar for most class that night was Chris Rock. Now Chris might not’ve been able to go toe-to-toe with Muhammad Ali (and let’s face it – we could see that Will pulled that punch and turned it into a slap at the last second), but we KNOW that Chris could’ve burned Will and Jada down with his rolodex of smartass comebacks in his standup arsenal. But he was classy enough to not escalate and stand down – and continue the show. The restraint and professionalism of Chris Rock NOT resorting to his standup persona, proved he was a REAL standup guy.

NOVEMBER 2022
No matter the public and celebrities and news shows rising up in social media fervor over the incident, at the time of writing, nothing has transpired in the way of punishment for Smith’s felony, further than being banned from the Oscars for 10 years. No matter the insincere apologies written by Smith’s lawyers, no matter the fake contrition from Smith and Jada’s reaction and talk-show speculation, Will Smith committed a crime — and as yet there has been NO arrest (Chris Rock would not press charges anyway), NO fines, NO repercussions. Except an abiding distaste in cinema culture for everything Will Smith. But that’s gonna wash away in two years. What won’t ever wash away is Will Smith’s reputation as Action Man Hero World Saver demoted to Simp Gimp Coward Cuck Pussy. If he had been a Real Man to Jada over the course of their relationship, he wouldn’t have tried to PROVE he was a Real Man, and displayed to the world the exact opposite.

Will Slaps Chris
At the 94th Oscar ceremony, host Chris Rock made a joke about Jada Pinkett-Smith, Will Smith’s wife, and Will simply walked up onstage unhindered and gave Chris Rock a violent, open-handed slap. At first, the whole world thought it was a gag, but Will’s ensuing profanities at Rock, and Rock’s embarrassed reaction, made the whole world realize it was real. And the whole world talked about nothing else for the next month.