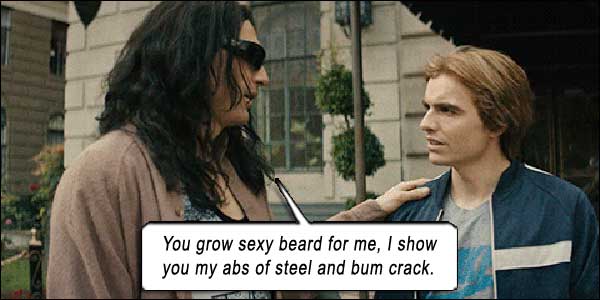 Adept actor James Franco plays inept actor Tommy Wiseau in THE DISASTER ARTIST, a good film about the making of the bad film THE ROOM.

Franco casts himself as the ambiguously-foreign Tommy, diving deep into Method with jet-raven waterfall locks, prosthetics to create a lazy eye, a ripped body, and an accent that Tommy claims is from New Orleans (if by New Orleans he means Lithuania). Reportedly, Franco stayed in character while he was directing, which was a big laugh to his longtime acquaintances who were also cast-mates. (Franco brings Tommy Wiseau along to junkets on talk shows, and I find it hilarious how he only talks to Wiseau in the Wiseau accent, as if it’s a language.)

THE DISASTER ARTIST is told from the point of view of Greg Sestero (played by James’s brother, Dave Franco), Tommy’s best friend (who Tommy cast in THE ROOM as, uh, his best friend). We follow Tommy and Greg from their first meeting at an acting class in San Francisco, through their tribulations in Hollywood (where they move into Tommy’s Los Angeles apartment – just one of many around the world that he can mysteriously afford), to the set of Tommy’s self-financed film after finding no success in the movie business. It is on this last leg that their friendship will be tested, and I find it a decidedly cynical “Hollywood” denouement that they remain friends to this day in real life only due to the success of THE ROOM, however undeserved and unwitting that was.

Franco has gone Daniel Day Lewis in his portrayal of Tommy, from Tommy’s military-styled jackets, to his pocketed dockers held up by numerous belts, to Tommy’s lazy delivery and stunted vernacular, down to his ingratiating little chortle and his inability to throw a football! It’s the role of a lifetime for this talented actor, and the mimicry provides most of the comedy. Brother Dave, up to this point, hesitant to act with James due to trying to forge his own career, is eminently relatable as the bad actor who hooks up with a force of nature that shepherds him into the biz.

Seth Rogen is Sandy the script supervisor, Paul Scheer is Raphael the DP, Zac Efron plays the character Chris-R (notably the best actor in THE ROOM, with Efron probably the best actor of this bunch as well, in this five-minute cameo). June Diane Raphael plays Robin (the hottest chick in THE ROOM and the same here), while Ari Graynor plays Lisa (Tommy’s girlfriend in THE ROOM); Josh Hutcherson plays that floppy-haired weirdo Denny, and Jacki Weaver delivers Lisa’s mother’s lines with that suitable deadness, especially when talk turns to breast cancer. Which she definitely has. 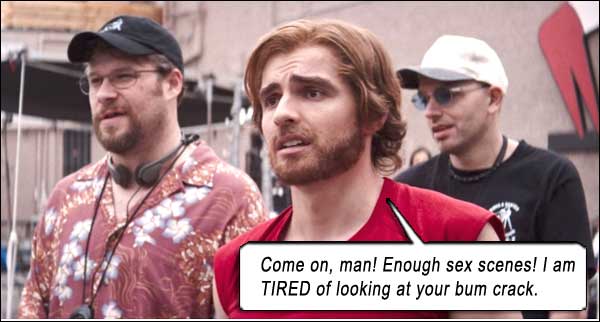 The first half of THE DISASTER ARTIST is played for comedy. No one can quite figure what is up with this Tommy guy; as in real life, this movie does not reveal the mysteries behind his age, ethnicity or financial background; he obviously doesn’t know what he’s doing as a filmmaker (shooting in 35mm and digital simultaneously), but his checks get cashed and that’s all that matters (a bank teller tells Sandy that Tommy’s account is “a bottomless pit” – but I doubt any teller would be that unethical).

In the latter half, the movie loses its breezy tone. Whilst filming THE ROOM, Tommy succumbs to megalomania, blindly leading the more experienced cast and crew while ironically claiming he has a vision, cussing them out regularly, and obsessing over details that would prove inconsequential in the final product. We lose our sense of wanting Tommy to succeed despite his shortcomings. At many points, we wish he could be taught a lesson on how bad THE ROOM really is. Unfortunately, real life has superseded art, and through Tommy’s insistent paid screenings, THE ROOM has attained cult status, and made back its budget many times over, playing at midnight screenings around the world. And the fact THE DISASTER ARTIST exists has made any life lesson for Tommy moot. The time for THE ROOM to sink into the overflowing hellpit of failed Los Angeles projects has long past, and its infamy guarantees that Tommy will never realize what a tool he truly is.

One theme that James Franco makes apparent in DISASTER ARTIST is a theme Tommy Wiseau failed to purvey effectively in THE ROOM: betrayal. Franco as Tommy finds betrayal in everyone around him – from acting coaches who suggest he should be a Frankenstein-like villain, to Hollywood casting agents who laugh at his accent; from producers that he tries to cajole in restaurants (Judd Apatow cameo) to his own cast and crew. Tommy finds betrayal in the fact Greg moves in with his girlfriend (Alison Brie), as opposed to staying his roomie; betrayal in Greg stretching to other projects; betrayal in Greg calling him out on his age, ethnicity and financial background. Thus, from this film, we can now more fully sense that betrayal theme built into the original film this movie is about – of course, we say: in THE ROOM, Tommy’s girlfriend and best friend both BETRAY him by having an affair! We were too busy laughing and being slack-jawed in shock before.

There is a tragic background tale to Greg appearing with a beard in the first part of THE ROOM, and then clean-shaven for the conclusion. Tommy had the notion that Greg should shave in the second half of the movie due to being a best man at an upcoming wedding. And in real life, Greg was asked NOT to shave for a walk-on lumberjack role he scored by making a lucky contact with Bryan Cranston (playing himself) at a café. Greg asked Tommy for a day off to do the Cranston shoot. And this is where Franco’s Tommy attains his nadir of darkness, selfishness and con-man. Not only did Tommy veto Greg’s time off, he forced him to shave, almost like he was removing any chance for Greg to sneak off in the near future to do the Cranston gig, implying that a one-off gig with Cranston would lead nowhere, while Greg’s starring role in Tommy’s excellent film would rocket his career. And citing betrayal just to twist the knife. Greg, disconsolate for possibly destroying his career by blowing off Cranston, stays. And shaves. Whether he made the right choice or not is pure conjecture. It is at this nadir for Greg that Dave Franco’s performance, ironically, achieves its zenith. (It’s also ironic that Tommy would cite Greg as the betrayer when Tommy is actually the one betraying Greg from moving up.) 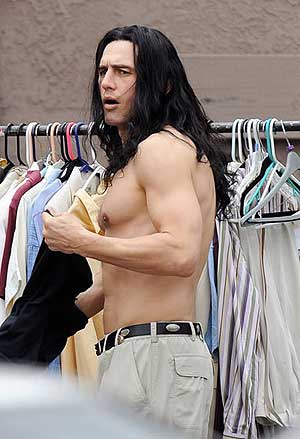 “Who care about shirt?!
Where my three other belts?”

The only aspect I disagree with in THE DISASTER ARTIST is the way Franco portrays Tommy as a “dreamer struggling to make it.” That’s a fine point of view if you are a talented artist who is not recognized, and the frustration of your predicament causes you to go all-out with some grand scheme that is do-or-die. Now – take that whole previous sentence, apply it to Tommy Wiseau, and remove the words “talented artist.”

Even the talking heads that open the film (including Ike Barinholtz, Kevin Smith, Keegan-Michael Key, J.J. Abrams and Kristin Bell) promote the wrong message: that Tommy’s struggles as a downtrodden artist paid off. “…the sheer ambition…” “A combination of fearlessness and confusing self-belief…” They’re not saying, “It’s a shit movie – with an amazing turn of fate due to insidious marketing,” no, the content of their enthusiastic tributes leans toward the film being a passion project of great quality. And that is the wrong message in a world where people cannot discern facts from fake, where as many people support lack of quality as support craftsmanship and hard work; it’s the Howard Stern defense: ‘if it makes money, it’s gotta be good.’ So the very existence of this film, THE DISASTER ARTIST, muddies the waters about the actual level of quality of THE ROOM. That is, zero.

Let’s get that straight: there is NO QUALITY in THE ROOM. Zero quality, zero talent, zero craft, zero production value, zero understanding of filmmaking dialect. Yet it retains some kind of “worth,” for it is, in fact, maximum entertainment, due to that rubbernecker’s glee of trying to see a dismembered head in the street while driving past a horrific crash. And there is zero curiosity from Tommy Wiseau to educate himself in the craft. Meaning that over the past 14 years of THE ROOM’s existence, Tommy Wiseau has not created anything of quality to dispel the notion that he still doesn’t know what the fuck he is doing. He just keeps eating out on THE ROOM…

Yes, Tommy had ambition and a dream that wouldn’t die, and the balls to make something of his own, and all that stuff they keep telling us artists to cling to – but there’s one difference between Tommy and the majority of struggling artists with dreams to conquer the world, who take up residence in a Hollywood apartment that smells of pee – MONEY. However mysterious its source, Tommy had money to market his product. And when you market anything with enough verve, you get results. Look at the Snuggie, look at the Salad Shooter, look at the STAR WARS Prequels, hell, look at the dimwit, racist 45th president of the United States!

The iconic scene that did naaaht change anything about cinema the way we know it.
I don’t want to talk about it.

What also creeps through is the notion that due to THE ROOM’s inadvertent success, Tommy is a success as an artist. The fact that Tommy can accompany Franco on THE DISASTER ARTIST junkets and claim fame, however vicarious, seems to bolster that notion. But it is just a case of money – and money doesn’t make something of no quality attain inherent quality. Look at the Snuggie, look at the Salad Shooter, look at the STAR WARS Prequels, hell, look at the dimwit, racist 45th president of the United States!

So I’m not sure what the aim of THE DISASTER ARTIST is. In one respect, James Franco has crafted a reasonable comedy about a comedic figure in filmic history. In another sense, he is paying tribute to someone who simply had the money to continue the advertising push of something that should have died a grisly death in the crib. This is not a movie about a film deserving of tribute, like THE GODFATHER, UNFORGIVEN, or 2001: A SPACE ODYSSEY.

This is about the making of THE ROOM. Which is definitely not a film deserving of accolades. It is naaaht.

2 Comments on “THE DISASTER ARTIST”