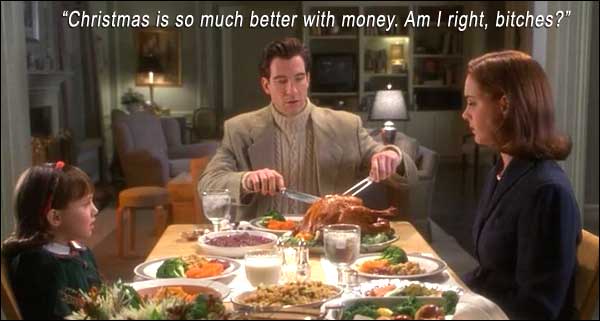 WARNING TO DIABETICS: The syrup content of MIRACLE ON 34TH STREET is so high that the surgeon general advises not to watch it, for danger of inducing diabetic neuropathy and gastroparesis.

Les Mayfield (ENCINO MAN) directs this remake of the 1947 “classic,” about a Coles store Santa who claims to be “Kris Kringle” (Richard Attenborough), and is taken to court charged with assault (the “Santa” impersonator whom Kris replaced at Coles provoked Kris into assaulting him), whereby the assault charge is forgotten and the case instead turns to “whether Santa Claus is real.” And we wonder why there are so many innocent people in jail… 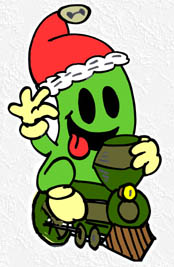 Dorey Walker (Elizabeth Perkins) is responsible for hiring Kris at Coles, with a cynic daughter, Susan (Mara Wilson), who ironically doesn’t believe in Santa. Not until all her outlandish wishes are granted, at least. Bryan Bedford (Dylan McDermott) is the hunk next door who helps Kris win in court and helps himself to finding Dorey.

Like a straightjacketed epileptic, this film bashes itself against hundreds of paradoxes, in frothing attempts at taking one step forward (in its high-end production value and A-list acting) and then three or four steps backwards into the mouth of Hell (with its thigh-numbing sentiments of goodness and niceness and the utility of believing in figments as reality). MIRACLE ON 34TH STREET is one of those well-intentioned, “dangerous” movies – the type over-popularized in the last two decades by brain-damaging fare like the HOME ALONE’s and the CHEAPER BY THE DOZEN’s, which purport to wholesome family entertainment, whilst insidiously intimating that intelligence and reason are only for fools.

The greatest paradox faced by any Santa-Is-Real film is that in the film’s world, it is always taken for granted that Santa DOES exist and that parents do not believe in him. But if he actually exists, it is not a question of “belief” – it is a case of “evidence.” All it takes is one christmas morning and a cluster of unidentified presents under the christian-killed tree and – question of veracity solved! Therefore, in these movies, if the parents are, in fact, buying all the presents, there are two possibilities: either Santa does exist and is not visiting anyone, or Santa doesn’t exist, which is why you parents had to buy all the crap under the tree. Occam’s Razor tells us to go with the simpler of the two possibilities.

Yet through the course of this film, all the humbugs and doubting parents in Kris’s jolly wake gradually get overtaken by some kind of delusion (sometimes called “the christmas spirit” in pagan texts), and are cajoled into “believing” in Santa, for the sake of, we are told, “a lie that draws a smile, rather than a truth that draws a tear.” Yes, turn away from Truth. Truth is bad. Better to delude yourself that Mercury in retrograde is the cause of your lost wealth, rather than betting it all on a card game. Better to believe in astrology, rather than facing the truth that you are a DIMWITTED MORON STEERING YOUR SPECIES INTO EVOLUTIONARY OBLIVION. 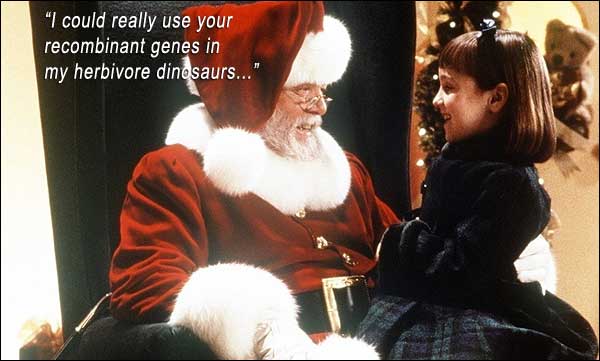 Sir Attenborough makes for a perfect visual representation of the mythical, peeping-tom, child-watcher Klaus (render as much Nazi inflection as you see fit), ably supported by intentionally-retarded performances by Perkins, McDermott, James Remar as an attorney, Robert Prosky as a judge and young Mara Wilson, playing her usual seven-going-on-forty, precocious, mouthy brat. (Why “intentionally-retarded”? Well, the longest anyone would ever have to wait to establish whether Santa existed or not is 364 days. In MIRACLE, the wait is only a few days, yet the filmmakers conveniently avoid the issue by neglecting to tell viewers whether any presents mysteriously appeared under trees.)

The fact that this movie astoundingly retains as its central theme the conundrum that any semi-intelligent dolphin could decipher as unutterably imbecilic, illustrates perfectly the reason why mercy killings exist. This movie almost cries out for humanity to beat it over the head to put it out of its misery.

Before his arrest, Kris – in his naïve goodheartedness – was advising Coles patrons of better bargains at other stores. Immediately, Coles management jumps on the marketing ploy: “If we don’t have it, we’ll find it for you.” Now, as altruistic as this may sound, the corporate heads realize the reverse-psychology is garnering more business! With the public embracing Coles as helpful, their rival department store seethes with lost-business fury! Conveniently located across the street, the rival store is managed by a game Joss Ackland (playing the same evil overlord he perfected in LETHAL WEAPON 2 and BILL AND TED’S BOGUS JOURNEY), who goes after the person responsible for the campaign to discredit him. No, not someone in the Coles marketing department, nosiree; in his tactical wisdom, he goes after the bottom rung employee, the Coles Santa Claus.

As evidenced when Perkins, recanting on her brain, poses the question to the Coles board of directors when they are considering ceasing Kris’s “ploy” of recommending other stores, “What do we care about? Profit?” Well – YES, you jackass! Why are you working here? Charity? And the only reason she convinces them to retain Kris is because of the PROFITS they are seeing!

Kris tells Dorey, “If you can’t accept anything on faith, then you’re doomed for a life dominated by doubt.” Yes, but Kris, if you use the scientific method of observation, skepticism, theory, experiment, amassing evidence, replacing outmoded knowledge with updated facts, a cohesive picture of what you doubted will come into focus. And we wonder why America, in the 2000s bows down to a megalomaniac who cannot separate church from state (at a base level, this means he cannot separate fact from fiction – exactly this movie’s problem!); we wonder why science is taking a backseat to pseudoscience; we wonder why it is so easy to sell people an ab-roller that “takes pounds off” their fugly gunts without any effort expended on their part, yet who cannot be convinced that proteins, carbohydrates, fats and sugars in correct amounts can winnow away that same fat.

The miracle is that, for all its vaunted intelligence, the human race has degenerated to this credulous, gullible, mongoloid state.

Treat others with respect. Be humane. Be courteous. Love. Sex (as in verb). Let live. These are universal truths, built into our genetic framework, in order to perpetuate procreation of our species. There are those who maintain the movie’s aspirations to goodheartedness and the “spirit of christmas” should not be belittled. They are right – the SENTIMENTS should be upheld. But why couch these truths in the filth of mysticism and hypocrisy, in the framework of paradoxical fictions that insult the truly inspiring, knowledge-seeking mind? 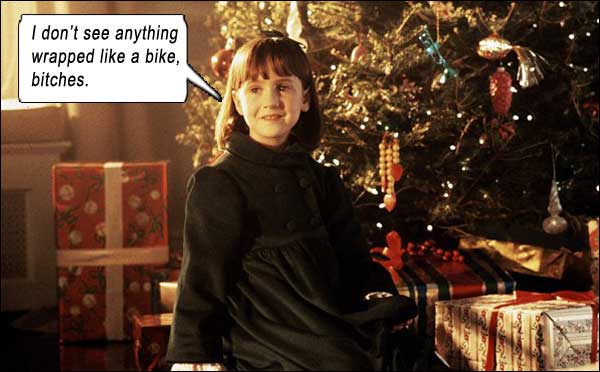 Claus affirms, “I’m a symbol to suppress the hateful tendencies that rule a major part of our lives.” Firstly, if “hateful tendencies,” as you so pessimistically put it, Klaus, “ruled our lives,” homo sapiens would have been excised from the pathway of evolution eons ago. Our adherence to social structure and reciprocal altruism is what has kept us alive. That being said, if modern day humans are so braindead that they require an effigy to represent faux-spirituality and faux-goodness (whether it be Santa, Jesus, Thor, Buddha, or Tom Cruise), we’ve put ourselves on the pathway out of evolutionary selection. Give it fifty-thousand years. The roaches would thank us – if we were not already below their contempt.

The grandest malarkey of all is that the case for or against Kris Kringle – a phantasm to begin with – is decided on the grounds of another phantasm. Bryan, Kris’s attorney, highlights the fact that American money is inscribed with the words, “In God We Trust.” On the strength of this vague indeterminacy, the judge rationalizes that one fiction is as good as another and rules that Santa Claus does, in fact, exist.

Piling insult upon insult on the viewer, Klaus then tells the prosecuting attorney (J.T. Walsh), “I hope you removed that antenna because I tore my pants on it last year.” This must mean that Klaus left anonymous presents at the attorney’s house. Evidence! So the only reason Walsh refutes Santa’s existence must be either short term memory loss or retardation. Choose one, movie.

As we gag in disbelief at the level of insanity attained in the movie’s last ten minutes, we remember Sarah’s Christmas wish – “a house, a brother, a dad” – anything else, like 40 acres and a mule, you little snot? And just to make our heads explode: Bryan and Dorey suddenly wed at movie’s end, both advised of work bonuses (which accounts for Dorey’s chunky wedding ring), and then take possession of a mansion mysteriously bequeathed to them. And if the movie is to comply to all the wishes of the whining spoiled bitch at its heart, I suppose Dorey has a bun up the duff as well.

This makes Susan very happy, because that’s what happiness is all about – having lots of money and a house that is fully paid for, living in a family with great-looking people with great hair, because those are the most loving and sincere of all humans. And if you believe in a fiction hard enough, you will win your court case.

I wish for some insulin.