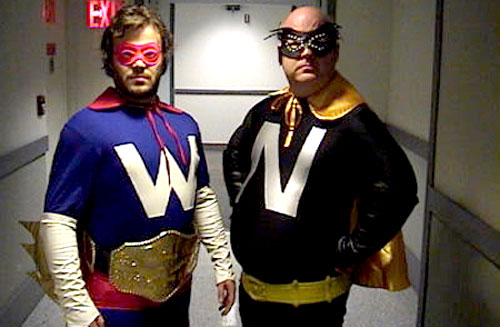 Once every hundred-thousand years or so, when the sun doth shine and the moon doth glow…

Once in a great while, an act appears that shimmers with such kineticism, such verve and lust, that audiences are scorched into submission – such an act is The Darkness – oh, and Tenacious D “The Greatest Band On Earth.”

No small coincidence that I mention The Darkness above; an anachronism that treads the same razor’s edge as The D, but on the “serious” side of the music biz. But what denotes “serious”? If financial success is the measure of sobriety, then Tenacious D is every bit as serious as those “real” rockstars. Which makes Tenacious D, as unlikely as it may be, real rockstars. 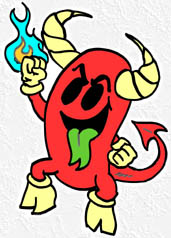 Jack Black and Kyle Gass have achieved a unique quasi-stardom; satirized themselves into the “serious” rock world and into ostentatious success that they obviously could never grasp via conventional methods. We know that these guys are veterans of the rock scene – how else could they act so clueless so convincingly? – who never did “make it” with whichever garage bands they wore five-inch heels in, due to the provincialism of the music business; for the simple reason that their niche of pomp-rock has come to be purveyed by the likes of (and the looks of) the David Coverdales and the Jon Bon Jovis. And if you didn’t fit the mold, you were out in the cold. But Tenacious D have become their own self-fulfilling prophecy: in satirically proclaiming they would “change the face of rock” – they have!

Black’s hi-octane physicality and power-tenor vocal delivery is comparable to any of the arena frontmen whom he is hot on the heels of, and Gass’s guitar expertise rivals, if not surpasses, most of the toyboy hair-shredders of the 80’s who were bequeathed recording contracts on the strength of their Aquanet.

But Tenacious D’s angle of attack has widened their scope. Unlike “serious” musicians who boast powerful talent, yet are stultified by the “demographic” that they are marketed to, The D can shamelessly perform feats which would cause “serious” rock stars unwarranted PR problems or lose them their followings: criticize other musicians without press repercussion; display their out-of-shape bodies without loss of libido; wear idiotic stage attire whilst fearing no fashion police; claim to devil-worship without evangelical dissent; egotistically aggrandize their own product without humility; all due to the initial establishment that this project is unequivocally tongue-in-cheek!

But how far can tongue-in-cheek stretch? Ultimately, when international tours come into play, the business of propagating fun has to be taken seriously somewhere along the way – or money gets squandered and corporate wangling gets ugly.

The bittersweet irony is that in winning widespread public acceptance – in other words, in attaining “commercialism” (a word that would make rockers and hard-core fans cringe) – Tenacious D have paradoxically lost the vital element that won them that commercialism: their naiveté – for where is the parody in terming yourself “The Greatest Band on Earth” if everyone in your audience agrees with you?

The hook for the HBO series which launched Tenacious D onto an unsuspecting public was that it was obvious that these two rock-and-retch burnouts would never even have the finances to pay for a ticket to see – let alone be – “The Greatest Band On Earth,” as they exalted themselves from a dank stage where audiences almost didn’t even acknowledge their existence. (That being said, HBO must be kicking themselves that they didn’t contract Tenacious D for more than 3 half-hour episodes – Who knew that those benign television morsels, all of which are included in the Master Works DVD, would attain such cult legend?)

And now, Tenacious D, having brushed so close to actually being considered The Greatest Band On Earth (through acclaim by a multitude of fans), have necessarily modified their focus. This is not a bad thing, as every artist must sway to their public’s demand, but their éclat has shifted, from “vainly trying to make people notice them,” to “raving in the spotlight.” The overwrought, Spike Jones-directed Wonderboy music video is a prime example of their largesse threatening to outrun their self-possession. Though they parody Ronnie James Dio in an eponymous ode, this video is more Dio than Dio ever was – the production value could never be matched by Dio’s budgets in his heyday – which begs the question on whether the satirists have become the satire yet.

Is it still tongue-in-cheek? Yes.

For holding at bay the curse of self-consciousness and self-awareness is a schoolkid honesty and sophomoric sensibility, illustrated best in the three additional mentally-twisted shorts on the DVD – showing us that, talented though they may be, The D are still two sick puppies with abject disregard for social protocol, a near-miracle in this frightened and quivering politically-gutless modern age. It might be guilty laughter watching “Rock Star Sperm For Sale,” but it is unbidden guilty laughter. We wish we could all be this honest and juvenile and callous.

The DVD also sports the full-length concert at the Brixton Academy in London; a daring, stark presentation featuring only the duo themselves, harking back to their roots when there was no “band” intrusion into their chemistry. It is testament to The D’s charisma and talent (Black’s freneticism, perfectly complemented by the understated Gass) that they can hold an internet-bred audience with such rigor…

We bear witness to one of the truly great comedy teams of our time.

Praise be to Satan on his big-assed steed!

Tenacious D ♦ “Tribute
(The Greatest Song In The World)”