A bunch of stunts and car chases got together and called itself RED 2.

It convinced Bruce Willis and John Malkovich to reprise their roles as Frank Moses and Marvin, ex-CIA Retired-Extremely-Dangerous overactors, “indicating” their way through this spy comedy. Movie also convinced Helen Mirren to reprise her role as the most dangerous wetwork queen bitch, given a contract to kill Bruce and Malko, her best pals. Bryan Cox returns, lusting after Helen. And Mary Louise-Parker returns as Bruce’s delicate civilian love interest, so that I may lust after her.

There’s also a plot of a WMD about to be loosed on the world, so Frank and Marvin must find the eccentric professor who built it (for reason unknown). You lost me at why anyone cares about or listens to these old queens if they’re off the grid and about to be whacked. And who is the professor? Well, whenever a character in one of these ensemble movies is introduced by first seeing the back of his head, it’s always a case of speculating on which A-lister was conned into taking a cut in pay to be in this ensemble cast. Turns out the professor is Anthony Hopkins, conned into taking a cut in pay, so therefore, acting while giving only half a rat’s ass.

Forever pursuing Frank Moses – Neal McDonough as a CIA spook, who gives way too much of a rat’s ass. I mean, can you just leave these retired people alone for a second, CIA muttonhead? Maybe you’ll discern that killing them will accomplish nothing. And maybe you’ll keep all the bones in your hands and legs intact. 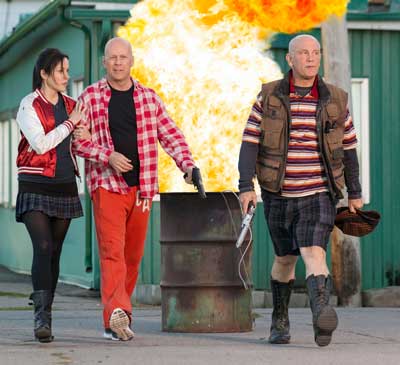 Who is responsible for this garbled mess? Director Dean Parisot (from the enjoyable GALAXY QUEST to the mediocre FUN WITH DICK AND JANE 2005); but more than the director’s fault – the editor, Don Zimmerman. It seems amazing that Zimmerman worked on those same two movies, as well as other A-List titles that never exhibited the haphazard piecemeal approach he effects with RED 2. Shots appear at random after the scene is over, reaction shots that go nowhere, mean nothing; further shots after the button has been pushed on a scene; a hodgepodge of meaningless angles after the point of the scene has been made, etc. After his body of good work, Zimmerman seems like he’s getting too old for this shit, as in apathetic. He could take a few lessons from the editor of CAPTAIN AMERICA: THE WINTER SOLDIER. Or maybe from a 7-year-old.

David Thewlis is a French spy called The Frog (and no one sees this as racist because…? American movie?); and Byung-hun Lee is the agency’s premier assassin who somehow can’t kill Frank Moses because – I don’t even care anymore.

One of the stupidest lines: Frank yells to Marvin during a gun battle, to take Frank’s girlfriend to safety, “Get her outa here!” To which Marvin asks, “When?” Frank’s yelled reply, “Now!” When someone says get her outa here during a gun battle, doesn’t it imply NOW? What did Marvin expect the answer to be: “In ten minutes”? Who wrote this redundant piece of idiot dialogue? Turns out, the same two guys who wrote the first movie. Now they’ve figured out how to phone in scripts.

Y’know, movies like RED 2 are the reason why Liam Neeson quietly usurped the Action Hero crown from Bruce Willis. It’s not so much that the movies themselves are bad, but that Willis is also bad in them, forcing his comedic shtick like amateur hour.

Eventually we just get sick of this many idiots firing automatic weapons and hitting this much nothing. Especially when their target – our heroes – are right in front of them and they don’t shoot AT them but fire warning shots into the air, and then AFTER the hero takes cover do they start shooting AT the hero’s location in earnest…. My head’s about to explode with how many times the bad guys have the drop on our heroes and DON’T shoot them.

Don’t make the same mistake with RED 2, Movie Maniac. When you see this movie – shoot to kill.